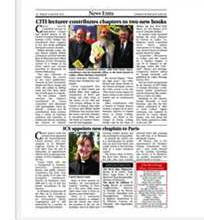 Today’s edition of the Church of Ireland Gazette [Friday, 16 August 2013] carries the following half-page news report and photograph on the back page: 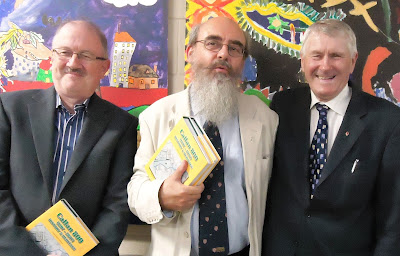 Bishop Brendan Leahy, the new Roman Catholic Bishop of Limerick, and Prof. Salvador Ryan of Maynooth, have edited Treasures of Irish Christianity, Volume II, A People of the Word, which was recently launched in Maynooth by Veritas Pubications.

This new collection of essays follows the success of last year’s publication, Treasures of Irish Christianity: People and Places, Images and Texts, also edited by Bishop Leahy and Professor Ryan and, which has recently gone to a reprint.

The new volume – which contains two chapters by Canon Comerford and illustrated with photographs taken by himself – contains over 80 contributions from scholars from a variety of Christian traditions and Churches in Ireland and abroad, including the Church of Ireland, Greek Orthodox, Methodist, Pentecostal, Presbyterian and Quaker.

Canon Comerford’s first chapter on ‘Bale’s Books and Bedell’s Bible: Early Anglican Translations of Word and Liturgy into Irish’ looks at the careers of two 16th and 17th century bishops of the Church of Ireland, John Bale of Ossory and William Bedell of Kilmore, and contrasts their life stories and their attitudes to translating the Bible and The Book of Common Prayer into the Irish language.

Other contributions with a Church of Ireland interest include a chapter by Dr Kerry Houston, Director of Chapel Music at Trinity College, Dublin, on ‘Music in the Chapel of Trinity College Dublin’; and by the Dean of Belfast, the Very Revd John Mann, on ‘The Mosaics of St Anne’s Cathedral, Belfast.’

In another book launched during the local Abhainn Rí Festival in Callan, Co Kilkenny, Canon Comerford has written about family monuments in St Mary’s, the now–closed Church of Ireland parish church in Callan.

‘Comerford Monuments in Callan and the search for a Family’s Origins’ is one of 19 chapters in the 380-page Callan 800 (1207–2007), History & Heritage, Companion Volume, edited by Joseph Kennedy and published by Callan Heritage Society, 2013.

The new book was launched by Joe Kearney of RTÉ Radio 1’s Sunday Miscellany, a well–known author, broadcaster and documentary film–maker, who is from Callan.

Speaking at the book launch, Joseph Kennedy, a local historian, said the first volume, published in 2007 to mark Callan’s eighth centenary, was inspired by research by Canon Adrian Empey, who had dated the first charter granted to Callan to the year 1207.

Update: 28 August 2013: A similar full-page news report and photograph is published in the September edition of the Diocesan Magazine (Cashel, Ferns and Leighlin), page 29.

Posted by Patrick Comerford at 18:55 No comments:

Welcome to the casbah,
this boy is back in town 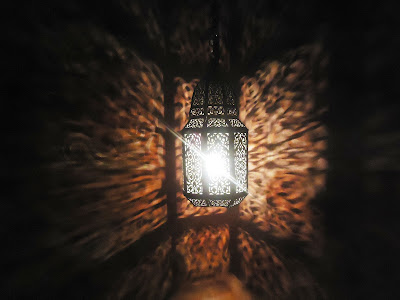 Thursday evening is traditionally one for late-evening shopping in Dublin city centre. But we were “back in town” last night not for shopping in the city centre but for dinner.

We parked in Drury Street car park, and I was surprised to realise that the area between South Great George’s Street and Grafton Street is a far a-buzz and much more attractive at this time of the day than, say, the Temple Bar area.

Like the Temple Bar area, there are narrow streets and cobbled lanes with cafés, tapas bars, pubs and restaurants. Yes, of course, there are probably as many seedy places in this quarter as you find in the Temple Bar. But it just felt less brash and more comfortable, more authentic and inviting, safer and more like the areas you find in any European city where city workers like to relax after a hard working day over a drik and meal.

There was no shortage of places to eat in these streets, but we had a voucher for Dada, the Moroccan restaurant in South William Street. 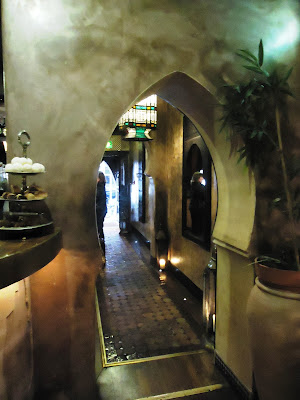 Moroccan cooking has more rich spices than the Eastern Mediterranean restaurant I tend to favour in Dublin, and so it was interesting to anticipate the North African fare, with its blends and tastes that include cumin, coriander, saffron, chillies, dried ginger, cinnamon and paprika.

The first impression is of “faux casbah” decor, if such a style exists. But it was as intriguing and as inviting as it was amusing, and there was a warm welcome at the door.

Dada is the imaginative creation of husband-and-wife team Aziz and Eva, who offer a fusion of authentic Moorish-inspired dishes with their chef Jalal Belmaati, who worked in Casablanca and in Spain before coming to Ireland.

It was only 6.30, but the place was busy, from one large table with at least a dozen people in their late 20s or 30s, to small, intimate corners with couples engaged in quiet one-to-one conversations. 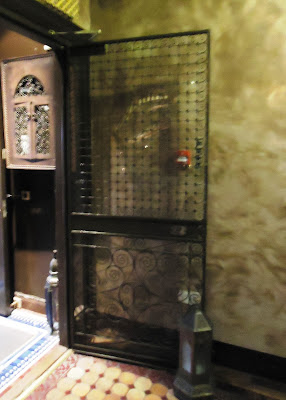 For starters, we shared fried spinach with preserved lemon, green olives and spices, and hommus with tahine, cumin and olive oil; for our main courses we shared a “seven vegetables and preserved lemon tagine” and a pumpkin and carrot tagine with lentils.

We had a bottle of Pinot Grigio, and finished with a selection of homemade Moroccan pastries and traditional Moroccan coffee – this was not at all like Lebanese or Turkish coffee, but was an espresso-style coffee with a spice blend. 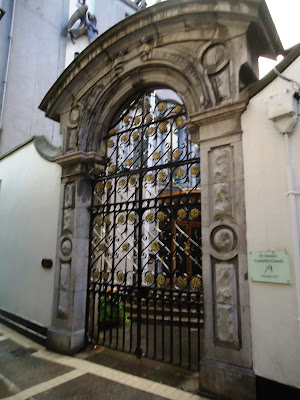 A church gateway in the rain in Johnson’s Court off Grafton Street, Dublin (Photograph: Patrick Comerford, 2013)

As we left, South William Street was still alive, despite the rain. We strolled down to South Andrew Street and Suffolk Street, and as we were walking back up Grafton Street, the rain came down again with even greater intensity.

We took refuge for a few moments in shop porch on the corner of Grafton Street and John’s Court... but the buskers had abandoned their pitches, and darkness was closing it. We gave up on our plan to go on to see the restored Phil Lynott statue in Harry Street. Yes, the Boy is Back in Town. But we’ll have to wait for another day to see him.


Posted by Patrick Comerford at 13:32 No comments: