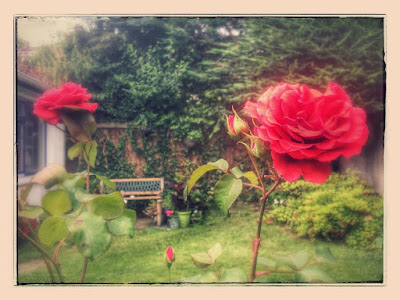 ‘My love across the ocean / Wears a scarlet coat so fair, / With a musket at his shoulder / And roses in his hair (Photograph: Patrick Comerford, 2016)

I am working on a short address for the annual Hiroshima Day commemoration being organised later this week [6 August 2016] by the Irish Campaign for Nuclear Disarmament (Irish CND).

Watching the rise of Donald Trump, the violence that has spread from the Middle East, and the fearful prospects created by a post-Brexit Britain, it seems the world is descending into chaos with tensions that exceed those at the height of the Cold War. A number of anti-war songs from the 1970s are going through my head at the moment, including Steeleye Span’s The Lowlands of Holland.

Today [1 August] is a bank holiday in the Republic of Ireland. But it is also Minden Day, which is still marked by some regiments in the British Army in commemoration of the Battle of Minden during the Seven Years’ War on 1 August 1759. The day is marked by wearing ‘Minden Roses’ on regimental head dress and decorating regimental colours with garlands of roses. These Minden Roses recall how in the battle soldiers wore wild roses they had plucked from the hedgerows as they advanced because the flowers reminded them of home.

The colours of roses vary, including red, white and yellow. Yorkshire regiments wear white roses and in 1975 this day [1 August] was declared Yorkshire Day, reflecting the presence of large numbers of Yorkshire soldiers at the battle.

Minden Day is recalled in many versions of the English folk song, The Lowlands of Holland. In this song, a young wife tells how her husband has died in the wars in Holland. But like so many English folk songs, there are many variants of this song.

Sometimes, the song describes how the young man is conscripted, or only the wife’s grief at his death and she refuses to adorn herself or marry again. Sometimes it includes a verse where the wife’s mother advises her to find a new partner, a description of Holland, or an account of the man’s ship sinking.

In a version from Suffolk, the singer’s lover who is leaving is a soldier rather than a sailor, and one of the verses refers to his part in the Battle of Minden. Sometimes it includes a verse where the wife’s mother advises her to find a new partner, a description of Holland, or an account of the man’s ship sinking. The Suffolk version also includes the verse:

My love across the ocean
Wears a scarlet coat so fair,
With a musket at his shoulder
And roses in his hair.

Modern artists and groups who have recorded the song include Paddy Tunney on The Lark in the Morning (1956), Lori Holland on Irish Folk Songs for Women, Volume 2 (1960) and the Dubliners on their album At Home with The Dubliners (1969).

But my first memory of this song is when Gay Woods, who was born in Dublin, sang it with Steeleye Span on their debut album Hark! The Village Wait in 1970. A year later, Sandy Denny sang it live on BBC Radio in 1971. The Chieftains later recorded it with Natalie Merchant for their album Tears of Stone (1999), and it has also been recorded by Sandy Denny, Dolores Keane, Tommy Makem, Martin Carthy, the Celtic Women and many other artists.

Although Hark! The Village Wait was Steeleye Span’s debut album, it was the only album to feature their original line- of. They broke up and reformed with a new membership immediately after its release, without ever performing live. It is also one of only two Steeleye Span studio albums to feature two female vocalists, Maddy Prior and Gay Woods -- the other album is Time (1996).

The album title refers to not the act of waiting, but to a “Wait” – a small body of wind instrumentalists employed by a town at public charge from Tudor times until the early 19th century. The Christmas Waits are referred to in the novels of Thomas Hardy.

The album tracks include the a capella version of A Calling-On Song – the first of many a capella pieces recorded by Steeleye Span, Blackleg Miner, Dark-Eyed Sailor, as well as The Lowlands of Holland.

The album was originally released in Britain by RCA but was not released at the time in the US. Yet The Lowlands of Holland became one of the anti-war folksongs of the 1970s.

Strangely, the Steeleye Span version of The Lowlands of Holland does not include the reference to roses in the lover’s hair:

The love that I have chosen, I’ll therewith be content
And the salt sea shall be frozen before that I repent
Repent it shall I never until the day I dee
But the lowlands of Holland has twined my love and me.

My love lies in the salt sea and I am on the side
It’s enough to break a young thing’s heart that lately was a bride.
But lately was a bonny bride with pleasure in her e’e.
But the lowlands of Holland has twined my love and me.

My love he built a bonny ship and set her on the sea
With seven score good mariners to bear her company.
But there’s three score of them is sunk and three score dead at sea
And the lowlands of Holland has twined my love and me.

My love has built anither ship and set her on the main
And nane but twenty mariners all for to bring her hame.
But the weary wind began to rise, the sea began to rout
And my love then and his bonny ship turned widdershins about.

Then shall neither quiff come on my head nor comb come in my hair
And shall neither coal nor candlelight shine in my bower mair.
And neither will I marry until the day I dee
For I never had a love but one and he’s drowned in the sea.