Reading ancient Greek and Latin texts in the Scriptorum 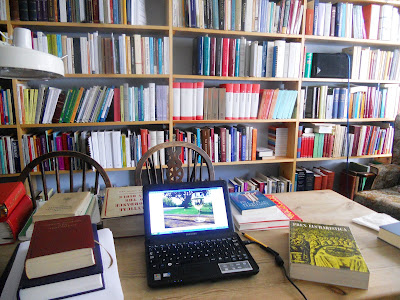 Working away in the Scriptorum, overlooking grounds of Ealing Abbey (Photograph: Patrick Comerford, 2012)

I’ve been working way for the past fortnight in the Scriptorum in the Institutum Liturgicum, on the top of floor of the Benedictine Study and Arts Centre.

The book-lined room overlooks the gardens and grounds of Saint Benedict’s Abbey, Ealing, and I’ve taken the occasional quiet stroll around the labyrinth beside the centre on Castle Road.

Over these two weeks, I have been working the guidance of Dom Ephrem Carr, President of the Pontifical Liturgical Institute at Sant’Anselmo in Rome and Professor of Eastern Liturgies at the Patristic Institute, the Augustinianum, also in Rome.

In addition, I’ve been able to attend some classes in advanced Latin with Dom Daniel McCarthy, head of liturgy at the Institutum Liturgicum and a former lecturer in liturgy at the Pontifical Beda College in Rome.

During these past two weeks, under the guidance of Father Ephraim, I have been looking at Eucharistic texts or anaphora from the first four centuries of the Church. We have paid particular attention to three texts: The Apostolic Tradition (the so-called Hippolytus anaphora), the anaphora of the Testamentum Domini, and the anaphora in The Apostolic Constitution (Book 8).

We have been looking at the basic structures of the prayers, their Biblical roots, and the parallels between the texts and where they differ. Someunexpected times there have been delights as we looked at the original texts in Greek, Latin and Syriac.

It may sound boring or arcane to anyone who is not a liturgist, but it has been a refreshing and revitalising course, and has made me think afresh of how we pray the Eucharist.

The fruits and rewards of the course come not in finishing the essay or receiving the certificate, but in putting into practice what I have learned both in my lectures and in how I take part in the Eucharist.

There has been time to walk through the labyrinth at the Benedictine Study and Arts Centre at Ealing Abbey (Photograph: Patrick Comerford, 2012)