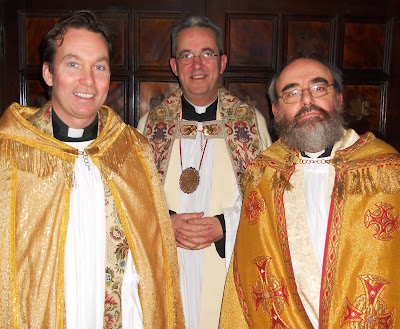 With the Precentor of Christ Church Cathedral, Canon Peter Campion, and the Dean, the Very Revd Dermot Dunne, in the Chapter House before this afternoon’s Festival of Five Lessons and Carols

No, it’s not true. I’m not ‘all-carolled-out’ and I’m nowhere near that state either.

We’re now into the last week before Christmas. The Gospel reading this morning [18 December 2011] was Saint Luke’s account of the annunciation and the Virgin Mary’s response, which was a mixture of obedience and shock, followed by her visit to her cousin Elizabeth.

Before the Gospel reading we lit the fourth and last candle on the Advent Wreath, which recalls the Virgin Mary. The preacher at the Sung Eucharist in Christ Church Cathedral, Dublin, was my colleague, the Revd Dr Maurice Elliott, Director of the Church of Ireland Theological Institute.

Over coffee in the crypt afterwards, there was much talk of Friday’s fundraising auction for the cathedral in Durrow, and the post-auction Reception, Dinner and Ball in Castle Durrow. Final figures have yet to be confirmed, but some sources say up to €100,000 may have been raised at the auction.

Five us went to lunch in the Larder in Parliament Street, and after a short walk around the Temple Bar area, rummaging in second-hand bookshops, I returned to Christ Church Cathedral for the Festival of Five Lessons and Carols.

The cathedral was packed with over 200 people at this traditional service this afternoon.

The processional hymn was Cecil Frances Alexander’s ‘Once in royal David’s city,’ with a solo opening verse, and the opening prayer by the Dean, the Very Revd Dermot Dunne, was an adaptation of the Bidding Prayer written by Eric Milner-White while he was Dean of King’s College, Cambridge, for the Service of Nine Lessons with Carols there.

The other carols and hymns included ‘Born in a stable so bare’ by John Rutter; ‘Gaudete, Gaudete’ (to a setting by by Bob Chilcott); ‘When he is king we will give him the king’s gifts’ by Bruce Blunt and Peter Warlock; ‘Good people all, this Christmas time’ by Timothy Noone; ‘O little town of Bethlehem’ by Phillips Brooks; ‘On Christmas night all Christians sing’ (the Sussex Carol), ‘Unto us is born a son’ (translated by George R. Woodward and arranged by David Wilcocks), ‘Ding Dong! Merrily on high’ (also written by George R. Woodward); and ‘Hark! The herald angels sing’ by Charles Wesley.

There were five readings, and I was asked as a chapter member to read the fifth reading, the opening of Saint John’s Gospel (John 1: 1-14).

‘Gaudete’ probably dates from the 16th century. The song was published in Piae Cantiones in 1582, but no music was given for the verses, and the standard tune comes from older liturgical books.

The version I have come to love became popular in the early 1970s, when I was also first introduced to English folk rock while I was in the English Midlands and writing for the Lichfield Mercury.

After Bob Johnson heard Gaudete at a folk carol service at his father-in-law’s church in Cambridge, Steeleye Span recorded Gaudete in 1972 on their album Below the Salt.

Steeleye Span was formed in 1969, and they often performed as the opening act for Jethro Tull. A year after recording Below the Salt, they had a Christmas hit single with Gaudete, when it made No 14 in the British charts in 1973. This was their first big breakthrough and it brought them onto Top of the Pops for the first time.

The reference in verse 3, which puzzled many fans at the time, is to the eastern gate of the city in Ezekiel’s vision (Ezekiel 44: 2). The gate is a traditional symbol of Mary as virgin.

Since the mid-1970s, despite the change in their line-up and the loss at different times of names like Maddy Pryor and Gay and Terry Woods, Steeleye Span continues to include Gaudete as a concert encore, and it was published in 1992 in the New Oxford Book of Carols.

Rejoice, rejoice! Christ is born
of the Virgin Mary: rejoice!

The time of grace has come
that we had prayed;
Hymns of joy
let us sing devoutly.

God is made man,
while nature wonders;
the world is made new
by Christ’s kingship.

Ezekiel’s doorway
once closed has been traversed;
whence the Light is come,
salvation has been found.

Therefore our assembly
must sing for purification,
Blessed be the Lord:
For our King’s salvation. 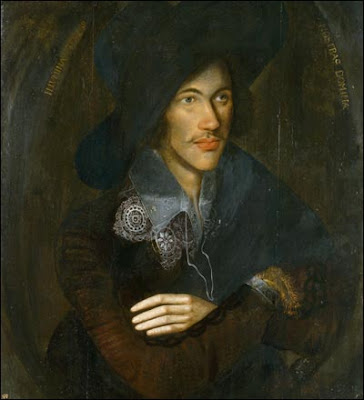 However, my choice of Christmas poem this morning is one of his lesser known poems, ‘Nativity.’

John Donne’s early career as a civil servant was hampered by his Roman Catholic leanings, then destroyed by the British aristocrat whose daughter he married against her father’s will. Like George Herbert, who featured in my choice of Christmas poem yesterday, John Donne he came to the attention of King James I. In the case of Donne, though, the king found him a prominent position in the Church of England, where he quickly earned respect for his writing.

John Donne (1572-1631) was the most outstanding of the English metaphysical poets. He was born in London to a prominent Roman Catholic family – his mother was related to Thomas More – but he became an Anglican in the 1590s. He studied at both Oxford and Cambridge, but he could not take a degree at either university because of his Roman Catholicism – although he would later received the degree DD from Cambridge.

He then studied law at Lincoln’s Inn, London, and was expected to embark on a legal or diplomatic career. In 1598, he was appointed private secretary to Sir Thomas Egerton, Keeper of the Great Seal, in 1598. But his secret marriage in 1601 to Egerton’s niece, Anne More, resulted in his dismissal and a brief imprisonment. When he wrote to his wife to tell her about his dismissal, he wrote after his name: “ John Donne, Anne Donne, Un-done.” After his release, he made a meagre living as a lawyer, and also served as an MP in 1601 and again in 1614.

Donne’s principal literary accomplishments during this period were Divine Poems (1607), La Corona (1610), from which today’s choice of poem is selected, and the prose work Biathanatos (ca 1608), which was published posthumously in 1644.

In 1615, Donne was ordained an Anglican priest and later that year he was appointed a royal chaplain. In 1621, he became Dean of Saint Paul’s Cathedral, London. There he attained eminence as a preacher for his sermons, regarded by many as the most brilliant and eloquent of his time

Donne preached what was called his own funeral sermon, “Death’s Duel” just a few weeks before he died in London on 31 March 1631

His poetry is noted for its vibrancy of language and inventiveness of metaphor, especially when he is compared with his contemporaries. His masculine, ingenious style is characterised by abrupt openings, paradoxes, dislocations, argumentative structure, and “conceits” – images that yoke things seemingly unlike. These features, combined with his frequent dramatic or everyday speech rhythms, his tense syntax, and his tough eloquence were both a reaction against the smoothness of conventional Elizabethan poetry and an adaptation into English of European baroque and mannerist techniques.

Some of Donne’s poetry is sensual for his time – many critics attribute those verses to his years as a student. A few of his poems apparently express his love for his wife, and a number express religious sentiment using terms and imagery that are nearly as passionate as his love poems.

Rising to prominence about a generation after Shakespeare, Donne wrote at a time when “wit,” or a kind of poetic cleverness, was highly valued. He delighted in writing complicated metaphors (called “conceits”) that often make his poems exercise the mind more than the heart.

Donne also delighted in imagined “contraction” or shrinkage of space and time – a lifetime into moments, or all of the world’s empires into his lovers’ eyes.

Nowhere in his “Divine” poems is that “contraction” more poignant than in the sonnet, ‘Nativity,’ my choice of Christmas poem this morning. In this poem, the Infinite becomes small enough to be contained in the most private of all chambers. Donne also points out with charming irony that God pitied us so much that he became vulnerable enough to elicit our pity toward him.

This early poem by Donne comes, from the collection La Corona (1610). The key to its understanding lies in contrasting the opening line “Immensity cloistered in thy dear womb,” with the contradictory “how He/Which fills all place, yet none holds Him.”

The Nativity Donne presents here is an historical reference, a few moments in time, standing for a message which is timeless and universal. The paradox moves in both time and space.

The image of tight confinement figures often in Donne’s writings, poetical and theological, and its significance is unfolded best here: “We are all conceived in close Prison; in our Mothers wombs, we are close Prisoners all; when we are borne, we are borne but to the liberty of the house; Prisoners still, though within larger walls; and then all our life is but a going out to the place of Execution, to death” (Easter Sunday 1619, Sermons, vol. 2, p. 107).

But the message of the Nativity, says Donne, is a message of purpose and direction on this path tread by endless humans across the ages: “Divers men may walke by the Sea side, and the same beames of the Sonne giving light to them all, one gathereth by the benefit of that light pebbles, or speckled shells, for curious vanitie, and another gathers precious Pearle, or medicinall Ambar, by the same light. So the common light of reason illumines us all; but one imployes this light upon the searching of impertinent vanities, another by a better use of the same light, finds out the Mysteries of Religion; and when he hath found them, loves them, not for the lights sake, but for the naturall and true worth of the thing it self.”

This is a “supernaturall light of faith and grace,” he writes, that made its appearance at the Nativity, but it is a light of reason that enables humankind both to understand its maker and itself (Christmas Day 1621, Sermons, vol. 3, p. 359).

Immensity cloistered in thy dear womb,
Now leaves His well-belov’d imprisonment,
There He hath made Himself to His intent
Weak enough, now into the world to come;
But O, for thee, for Him, hath the inn no room?
Yet lay Him in this stall, and from the Orient,
Stars and wise men will travel to prevent
The effect of Herod’s jealous general doom.
Seest thou, my soul, with thy faith’s eyes, how He
Which fills all place, yet none holds Him, doth lie?
Was not His pity towards thee wondrous high,
That would have need to be pitied by thee?
Kiss Him, and with Him into Egypt go,
With His kind mother, who partakes thy woe.