Saint John’s Cathedral:
the tallest building in
Limerick has the tallest
spire in Ireland 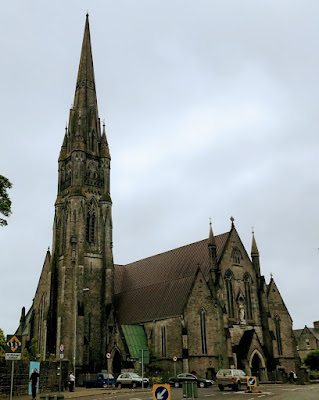 The Cathedral of Saint John the Baptist … the tallest building in Limerick and the tallest spire in Ireland (Photograph: Patrick Comerford, 2017)

Since coming to this diocese, I have made myself familiar with and comfortable in Saint Mary’s Cathedral, Limerick. But this week for the first time I visited Saint John’s Cathedral, the Roman Catholic cathedral in Limerick.

The cathedral was designed by the architect Philip Charles Hardwick, it has been in continuous use since it was built in 1861. It replaced a chapel founded in 1753, and stands across the street from Saint John’s Church, once the Church of Ireland parish church in this part of Limerick.

Saint John’s Cathedral is the tallest building in Limerick and is reputed to have tallest spire in Ireland, at 94 metres.

The Cathedral of Saint John the Baptist was built in 1856-1861, replacing an earlier chapel dating back to 1753. William Hill, a Quaker, bought the site of the present cathedral in 1796 and the land was kept in trust. The. The originally plan was to build a plain church for parish to replace the old chapel built in 1753, but because of the generous response to an appeal for funds, Bishop John Ryan (1828-1864) decided to designate the new church as the cathedral of his diocese.

Hardwick was a member of an important English architectural dynasty that included his father Philip Hardwick (1792-1870) and grandfather (1752-1825). His mother was born into another eminent architectural family, the Shaws.

Philip Charles Hardwick became the leading architect of banking offices in London, including Drummond’s in Trafalgar Square (1879-1881), and was the architect to the Bank of England (1855-1883). His best-known work, the Great Hall of Euston Station, London (1849), was demolished in 1962. His other works included the restoration of Saint Mary’s Church, Lambeth (1851-1852), now the Museum of Garden History and in the news last month with the discovery of the long-lost coffins of three bishops. http://www.patrickcomerford.com/2017/04/missing-coffin-of-former-bishop-of.html

At the time Bishop Ryan was thinking of building a new cathedral in Limerick, Harwick was working on Adare Manor for the Earl of Dunraven and on the restoration of an old abbey church as the Roman Catholic parish church in Adare. 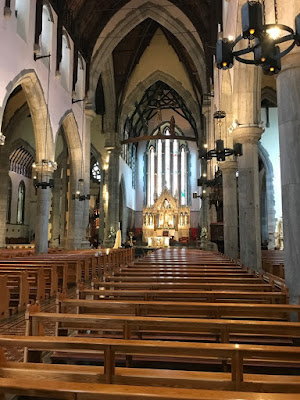 Hardwick’s new cathedral was built in the Gothic Revival style in the Early English phase. His designed was influenced by Salisbury Cathedral, although the tower and spire are central in Salisbury and the size, detail and ornamentations of Salisbury are on a different scale, and Hardwicke’s cathedral in Limerick resembles Pugin’s designs for Saint Mary’s Cathedral in Killarney.

The foundation stone was laid on 1 May 1856, and the first Mass in the cathedral was celebrated by Father William Bourke, parish priest during the building project, on 7 March 1859. He died a few weeks later and was buried in the new cathedral.

The cathedral was opened for public worship on 25 July 1861, although it was not completed at the time. Work stopped on the tower in 1862, and it was left incomplete and the interior still had to be decorated as well as the three side chapels.

The cathedral measures 51 metres by 36 at the transepts. The internal height of the nave is 24 metres and it has five bays and a clerestory.

Saint John’s Cathedral has the highest spire in Ireland at 94 metres from the base of the tower to the top of the cross. The tower, which was completed in 1878-1882 by Maurice Hennessy, is taller than Hardwicke had intended, and tapers into a spire at 163 feet high.

The cathedral was consecrated by Bishop Edward O’Dwyer on 21 June 1894 and it officially became a cathedral on 7 January 1912 in a decree in which Pope Pius X also restored the cathedral chapter.

A statue of Saint John the Baptist stands above the main door. Inside, the stained-glass window behind the high altar dates from 1867 and illustrates the newly-promulgated dogma of the Immaculate Conception, surrounded by images of Christ, Pope Pius IX and Bishop John Ryan who built the cathedral.

The windows in the north and south transepts and some of the side chapels have glass by Meyer of Munich.

The large stained-glass window in the north transept depicts scenes from the life of Christ. The centrepiece of the window shows the Transfiguration, with Christ surrounded by Moses and Elijah, and the Apostles Peter, James and John. Above this are Christ and Mary Magdalene, while at the bottom of the panel is Christ teaching the Disciples. To the left, the window shows Christ and Saint Peter above, and the wedding at Cana beneath. Further left, it depicts Christ with the Centurion, the miracle of the loaves and fishes and the temptation in the desert. To the right, the window depicts Christ with the little Children above and the raising of Jairus’ daughter below. To the right of this is the calming of the seas, the Sermon on the Mount and the raising of Lazarus. 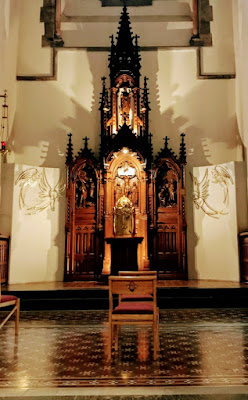 The aumbry with the former canopy and back of the cathedra, carved from Riga oak in Munich in 1894 (Photograph: Patrick Comerford, 2017)

To the left of the high altar, the former Blessed Sacrament Chapel has a stained-glass window of the Last Supper. This chapel used to contain the back and the canopy of the former bishop’s throne. Bishop Jeremiah Newman (1974-1995) and Bishop David Keane (1924-1945) are buried in front of the Blessed Sacrament Chapel. In all, six bishops of Limerick are buried in the cathedral.

The cathedral has been restored in the 1950s, the late 1970s and in 2003-2005. In the 1970s work, the bishop’s throne or cathedra was moved to the centre of the apse, with the original reredos of the High Altar as its backdrop.

During the latest restoration work, the baptismal font was moved to its original location in the north transept. A new aumbry, where the holy oils are kept, is now found in the former Blessed Sacrament Chapel, and contains the back and the canopy of the former cathedra, carved from Riga oak in Munich in 1894, with scenes of the Baptism of Christ, the Crucifixion and the Lamb of God.

Under the thirteenth Station of the Cross in the left transept is the tomb of Father James Fitzgibbon, who died during the cholera epidemic in 1837 at the age of 29.

To the right of the high altar, a white marble statue of the Virgin Mary was sculpted by Giovanni Benzoni and was donated by William Monsell, who later became Lord Emly.

One of the new features in Saint John’s Cathedral is the new surface around the High Altar which is laid out in the form of a 12-pointed labyrinth. It is based on a design by Michelangelo, and recalls the floor designs of many mediaeval cathedrals.

As I walked around Saint John’s Cathedral in its soothing lights, people were calling in and out constantly, finding quiet corners to pray and to contemplate, finding personal space in a building that towers over the city but is warm and welcoming. 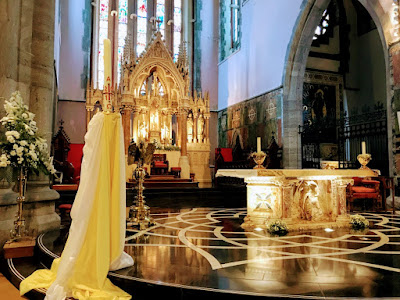 The High Altar and the labyrinth in Saint John’s Cathedral (Photograph: Patrick Comerford, 2017)

With new bookshelves now in place in the seminar room in the Rectory in Askeaton, I have spent some time each day clearing books out of boxes stacked away under the stairs, where they have been stored for weeks.

There is still some work to do, as the books have come out of the boxes randomly and now need to be moved around so that they are in some themed ordering and so that I can now find what I am looking for.

I am sure others can identify with the feelings I have when I cannot find a book today, but can still remember where it was in the flat where I lived in in Wexford in the 1970s, or the first house I bought in Dublin in the late 1970s.

It was a difficult moment in Dublin a few weeks ago as I closed the door of my former study in the Church of Ireland Theological Institute in Dublin, handed back my keys and left behind shelves lined with hundreds of books I knew I was unlikely to use here but that would be useful to my successor or former colleagues.

So many of my books carry emotions and memories across time and place. Quite often I have not only write my name on a book when I buy it but also the date and place where I bought it.

I constantly mark travel books with notes of where I have eaten, the room numbers of hotels I am staying in, or the dates I have visited towns, museums or archaeological sites. I use tickets and receipts to mark my place in books I am reading as I travel, and so when I open a book some years later, out may fall a train ticket, a bus ticket or a ticket to a gallery or the opera, or the business card from a café, and the holiday or working visit comes back to life again.

As I was moving some books around the new bookshelves in the Rectory in Askeaton late one evening this week, out fell a group photograph taken in editorial offices of The Irish Times over 30 years ago.

It seems to have taken on the day a presentation was made to Stephen Hilliard shortly before he left The Irish Times and was ordained deacon, so it was probably taken in 1986.

In the printing world, a presentation marking a departure like this was known as a ‘knockdown.’ This photographs shows colleagues from the Foreign Desk and the Chief Sub-Editors Desk that afternoon. I can identify (from left): Paul Gillespie (on the phone), myself, Liam McAuley, Gerard Smyth, Johnny Hughes, Ray Crowley, Malachy Logan, Sean O’Toole, Stephen Hilliard, Arminta Wallace, Noel Costello, Mary Morrissy and Patrick (Paddy) Smith.

I was 34 at the time. Stephen and I were studying theology at that time: he had completed a BD at London and was finishing his Diploma in Theology at the Church of Ireland Theological College and Trinity College Dublin; I had a year to go before finishing my BD at Maynooth.

Stephen was ordained deacon in 1986 and priest in 1987. He was a curate in the Christ Church Cathedral group of parishes (1986-1987) with Canon Pat Carmody, and then with Archdeacon Gordon Linney in Glenageary (1987-1988), before being appointed Rector of Rathdrum, Co Wicklow, in 1988. He died on 9 January 1990 following an attack by intruders in the rectory in Rathdrum.

Stephen had been a faithful member of the congregation in Saint Bartholomew’s Church, Ballsbridge, and so as I was writing about the celebrations at Saint Bartholomew’s yesterday, coming across this photograph at the same time was even more poignant.

Stephen Hilliard was proud of his family connection with another former journalist, the Revd Robert Martin (Bob) Hilliard (1904-1937), who fought in the International Brigade in the Spanish Civil War and was killed in the Battle of Jarama on 14 February 1937. Bob’s bravery was remembered by Christy Moore and Luke Kelly in the song Vive La Quinte Brigada.

Stephen was also a grandson of the Revd George Frederick Hamilton, Rector of Ballingarry, Co Limerick (1923-1931), now part of the Rathkeale and Kilnaughtin Group of Parishes, while his great-grandfather, Archdeacon Frederic Charles Hamilton (1828-1904) had at one time been Precentor of Saint Mary’s Cathedral, Limerick (1878-1883).

It is interesting how we can follow in each others’ steps.