Searching for Pugin, finding Lutyens, and walking by the river 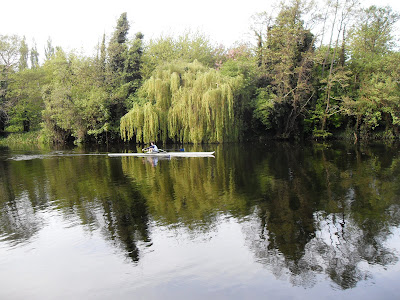 A tranquil moment by the banks of the River Liffey on Easter Monday (Photograph: Patrick Comerford, 2011)

The afternoon began with a search for yet another Pugin building. Although the chapel AWN Pugin designed for the Loreto Abbey in Rathfarnham is the Pugin work nearest to where I live and work, I had yet to photograph it in my quest to capture and catalogue his major Irish works.

Two of us headed down to Rathfarnham, knowing we would face major problems trying to photograph the chapel. The abbey was closed in 1999, the lands have been sold off for the development of private housing and development, and in recent works the old Palliser house which formed the nucleus of the abbey and Pugin’s chapel have been closed off to the public. 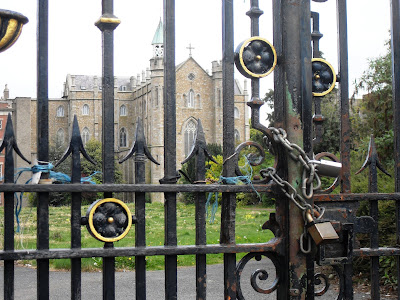 Pugin’s chapel in Rathfarnham ... behind gates that are chained and padlocked (Photograph: Patrick Comerford, 2011)

The place looks as if it is about to fall into ruin. The front lawn is overgrown, and gates are chained and padlocked.

The main building on the site is Rathfarnham House, which was built in 1725 for William Palliser to the design of Edward Lovett Pearce. The house was inherited in 1768 by the Rector of Rathfarnham, the Revd John Pallister, and was bought around 1790-1795 by George Grierson III, the King’s Printer.

That year, they established Loreto Abbey Boarding School, and Grange Road Primary School was set up in 1823. Between 1838 and 1840, a new chapel was built for the nuns according to designs of by the Dublin architect Patrick Byrne and AWN Pugin. 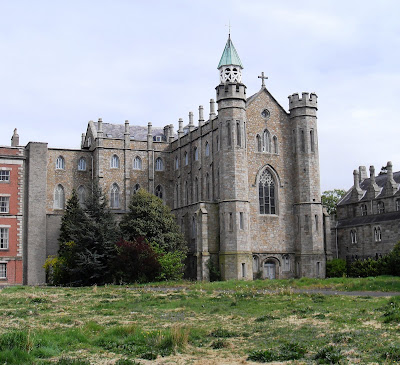 Pugin’s drawings for the church were prepared at the same time as his plans for Saint Michael’s Church, Gorey, Co Wexford, and Saint Chad’s Cathedral, Birmingham. They all date from March to June 1839, and together they mark the end of the first phase of his career.

Although I was allowed through the gates to see the exterior of the chapel, unfortunately I was unable to see the interior, where Pugin’s design resembles the lantern of Ely Cathedral.

In conversation outside afterwards, I realised I had never visited the Irish National War Memorial Gardens in Dublin, which are dedicated to the 49,400 Irish soldiers who were killed in World War I (1914-1918), and also recalls the 300,000 or more Irishmen who fought in that war. The gardens were designed by another great British architect who worked in Ireland, Sir Edwin Landseer Lutyens (1869-1944), are characteristic of his style of simple dignity.

From Rathfarnham we drove over to Islandbridge, where the gardens occupy about 8 ha on the south bank of the River Liffey, facing the Magazine Fort in the Phoenix Park.

The site, originally known as Longmeadows, was provided by the Irish Government in 1929, when it was proposed to lay out a public park at Government expense, with a Garden of Remembrance and War Memorial paid for from funds raised by a Memorial Committee. Work on laying out a linear parkway of about 60 ha, stretching from Islandbridge to Chapelizod, began in 1931 and took two years to complete. The Memorial Gardens were then laid out between 1933 and 1939.

These tranquil riverside gardens are characteristic of Lutyens and his style of simple dignity. They include a bridge over the railway, and a Great War stone surrounded by circular fountains. In turn, the fountains are enclosed by pairs of “book rooms” and pergolas, and below each pergola is a tiered sunken garden.

The “book rooms” are small limestone pavilions with sloping stone roofs and blank niches. Originally they held books designed by Harry Clarke – a leading figure in the Irish Arts and Crafts Movement better known for his stained-glass windows – and inscribed with the names of all the Irish war dead. The park rangers now have a facility in one of the pavilions to view and print any page from the 12-book memorial record.

The “Ginchy Cross” – a wooden cross fashioned on the style of a Celtic cross – is kept in the same pavilion. The wooden cross had been designed on a sheet of blotting paper by Major General WB Hickie, the commander of the 16th (Irish) Division, and was made from old oak beams by the divisional pioneer troops. It was originally erected on the Somme in a field between the villages of Guillemont and Ginchy. The two villages had been liberated by the 16th Irish with the loss of 240 officers and 4,090 men killed, wounded or missing.

Granite replicas of the cross were erected in 1926 at Guillemont and at Wytscheate in Belgium, while a third was erected in Thessaloniki in Greece, to commemorate the 10th (Irish) Division who fought in Gallipoli, Macedonia and the Middle East. 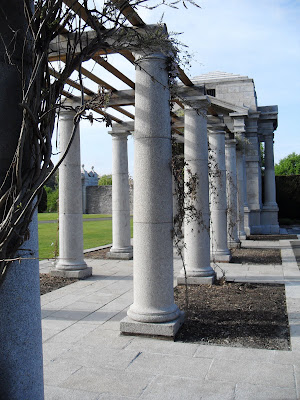 The gardens are a lesson by Lutyens in lassical symmetry and formality (Photograph: Patrick Comerford, 2011)

The gardens are a lesson in classical symmetry and formality and Lutyens’s concept for the Islandbridge site is outstanding among his many war memorials. His love of local material and the contrasting moods of the various compartments of the gardens testify to his creative genius.

Lutyens also planned a three-arch bridge over the River Liffey, linking the gardens with the Phoenix Park on the other side of the River. This bridge was planned for the central axis of the main lawn but was never built.

For many years, the memorial was beset by political problems, and the gardens were shamefully neglected for many years before being restored by the Office of Public Works in the 1980s. In 2006, the first fully official “opening and dedication” was attended by President Mary McAleese, the Taoiseach, government officials and representatives of the four main Churches.

Lutyens was a distinguished British architect and landscape designer, known for imaginatively adapting traditional architectural styles to the requirements of his era designed many English country houses.

He is known best for his instrumental role in designing and building a section of the metropolis of Delhi, which would later on serve as the seat of the Government of India. In collaboration with Herbert Baker, he was also the main architect of several monuments in New Delhi. His many war memorials include the Cenotaph in Whitehall in London.

In Ireland, he had previously worked at Howth Castle for the Gainsford-St Lawrence family, at Heywood in Co Laois for the Hutcheson Poe family, and on Lambay Island, off the coast of Portrane in north Co Dublin, for Cecil Baring, later Lord Revelstoke, who bought Lambay Island in 1904 for £9,000 from Count James Considine, formerly of Portrane House.

Standing in the memorial gardens this evening, I thought of my grandfather, Stephen Edward Comerford, who had fought in Gallipoli and Thessaloniki in World War I and was sent home on sick leave in May 1916, just weeks after the Easter Rising had broken out. He married Bridget Lynders of Portrane in 1904, only a year after Baring bought Lambay Island, and they are buried in Saint Catherine’s old churchyard in Portrane, within view of Lambay Island.

A stroll by the boat clubs

The sun was shining, and rowers were out on the river in eights, in pairs and in single skulls (Photograph: Patrick Comerford, 2011)

From the memorial gardens, we walked down to the banks of the River Liffey, where the sun was still shining, and rowers were out on the river in eights, in pairs and in single sculls.

Many rowing and boat clubs have their boathouses along this stretch of the Liffey, including the Dublin University, UCD, Neptune, Garda and Commercial clubs. 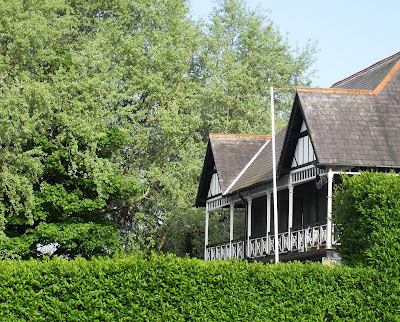 The Dublin University Boat Club dates back to 1836, and moved to Islandbridge in 1898 (Photograph: Patrick Comerford, 2011)

In 1881, a split in the DURC led to the formation of the Dublin University Boat Club. The next 17 years saw both a win at Henley, and the majority of important Irish rowing trophies being shared between these two clubs.

Old differences were put aside in 1898, and the two clubs amalgamated under the name of the Dublin University Boat Club. The familiar black and white hoops of the Trinity zephyr were retained from the boat club and adopted as the colours for the new club, and the club moved to Islandbridge, where it has had its home for over a century. Past members include many famous names, including Bram Stoker, the author of Dracula.

As we walked down the pathway on the southern bank of the river from Islandbridge towards Chapelizod, with willows dipping into the water, herons waiting patiently, and rowers making the best of the Easter Monday sunshine, the only human voices were those of the coaches, cycling up and down the pathways, encouraging and cajoling individuals, pairs and teams.

It was hard to imagine we were only 3 or 4 km the city centre. This could have been a quiet, undisturbed moment on the banks of Cam, a peaceful and tranquil place on the backs in Cambridge, and we could have lingered longer.

Posted by Patrick Comerford at 21:28 No comments: 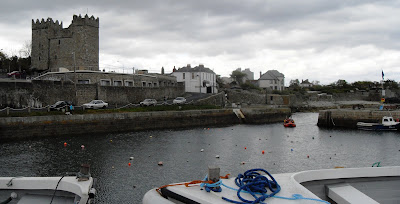 The past eight days – from Palm Sunday to Easter Day – are the busiest eight days in the life of any priests.

Over the past eight days, I have delivered twelve addresses or sermons; travelled through 11 counties (in three provinces); taken part in nine services; visited six churches and three cathedrals; and wrote for one newspaper.

By Sunday afternoon I was tired. After the Choral Festal Eucharist in Christ Church Cathedral, five of us went to lunch, and then two of us drove along the south Dublin suburban coastline, through Sandymount, Dun Laoghaire, Dalkey and Killiney.

In Dalkey, we stopped for a brief time at Bulloch Harbour, beneath Bulloch Castle on Ulverton Road, which is now part of Our Lady’s Manor Nursing Home. The sunshine we had enjoyed for the previous week was beginning to fade, but the walk around the harbour made up for the beach walks I had missed for the past week.

There were plenty of people playing around in boats in Bulloch Harbour, and a few seals off the harbour wall were the centre of attraction until five divers arrived in wet suits. 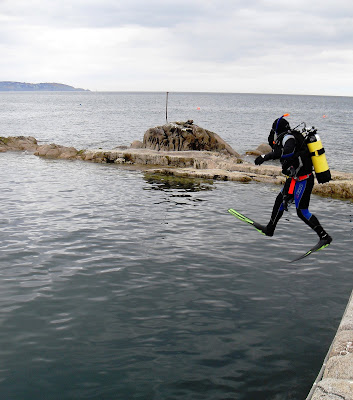 Bulloch Harbour is said to take its name either from the Scandinavian for “Blue Haven” or the Gaelic word for a tidal blow hole in the rocks.

The land at Bulloch was owned from early mediaeval times by the Cistercian monks of Saint Mary’s Abbey in Dublin. Bulloch Castle was built in the 12th century to protect their fishing rights, and the castle can be dated to about 1150 with the use of curved pointed arches mixed with the older round arches.

A small town grew up around the castle, and although Bulloch Castle was built for defence, it was also used as an inn for the cross-channel traffic that flowed through Dalkey ten Ireland’s main port.

In 1402, Prince Thomas of Lancaster, the king’s son, landed at Bulloch as Lord Lieutenant of Ireland, and in 1559 the Earl of Sussex landed there as Lord Deputy. At the dissolution of the monasteries under Henry VIII, the Cistercian Abbey of Saint Mary’s was dissolved, and Bulloch Castle passed into private ownership, first to the Fagan family. From the close of the 16th century, Dalkey went into decline as a cross-channel port. On a hill above Bulloch Harbour, Saint Patrick’s, the Church of Ireland parish church in Dalkey, dates from 1843.

From Dalkey, we continued out to Ashford in Co Wicklow, where friends were celebrating their silver wedding anniversary. In the garden nearby, half a dozen guinea fowl were strutting along the wall. But in our friends’ house, it was an evening of music, song poetry and story-telling.
Posted by Patrick Comerford at 12:55 No comments: