Back to walking on the beach in Skerries 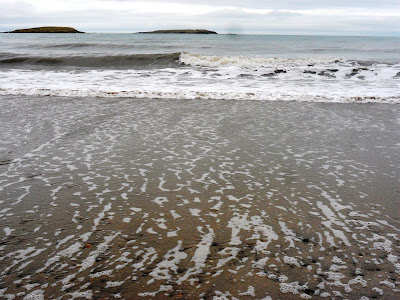 It was good to get back to walking on the beach in Skerries this afternoon (Photograph: Patrick Comerford, 2011)

In recent weeks I’ve missed my walks on the beach. I spent a week at the Emmaus Retreat and Conference Centre in Swords as chaplain at the meeting of Anglican Primates, but when the staff and facilitators went to dinner in Skerries on the Friday evening, everybody passed on the opportunity for a walk on the beach.

Then, on Saturday night, I was in Malahide for a family dinner – belatedly celebrating my birthday – in the recently refurbished and reopened Greek restaurant, Cape Greko. But the rain was pouring down, it was dark and wet, and a walk on the beach late at night was not possible.

But this afternoon, after the Sung Eucharist in Christ Church Cathedral, Dublin, two of us headed out to Portrane in north Co Dublin to visit my Lynders cousins – well there are only six months to go to the great August sale to raise funds for projects in Romania and Albania. The sea was a little rough, and the tide was far in, and there was no space on the shoreline for a walk.

The tide was in at the Quay in Portrane this afternoon (Photograph: Patrick Comerford, 2011)

Instead, we headed back through Donabate and further north, past the Rogerstown Estuary, through Rush, and back to Skerries. The sea was still a little rough, it was almost a full tide, and the beach was almost deserted. But after a double espresso and a goat’s cheese panino in the Olive, I had a healthy walk along the South Strand.

There were few people on the beach, and a feeling that rough weather was about to return. But I walked on up the beach, around Red Island, behind the Lifeboat Station, and back past the harbour and Skerries Sailing Club. A lone heron haughtily strutted along the shore, blissfully ignoring the gulls around him.

After picking up the Sunday papers and the latest [February] edition of the Skerries News, I headed home through Lusk.