‘I will not be pushed, filed, stamped … briefed,
de-briefed, or numbered! My life is my own’ 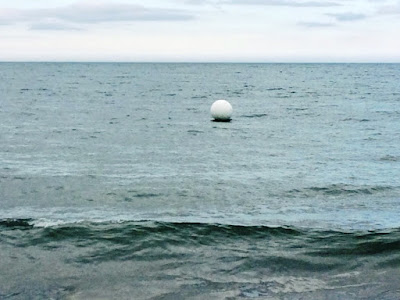 Has ‘The Prisoner’ come to Bray … is this Rover on the beach? (Photograph: Patrick Comerford, 2015)

Four large white markers bobbed along the surface of the water close to the shoreline at Bray late this afternoon.

Perhaps they were there as markers for a boat race earlier today. But as I looked out to the Irish Sea I realised that 138 km east as the crow flies, beyond the horizon and on the west coast of Wales is Portmerion, and the large white spheres reminded me of The Prisoner.

I posted some photographs on my Facebook page, with the caption: “The Prisoner comes to Bray.”

One Facebook friend said: “Time we had a re-run of the marvellous Patrick McGoohan and l am not a number l am a free man.”

But another asked “Who is Number One?” and then posted later: “YOU are Number One!”

I realised my thoughts are condition by time and place. Perhaps the comments could only be understood by people of my age, and have cultural relevance only for people who grew up, like me, watching television in the 1960s, on these islands. My comments and the discussion, perhaps, are meaningless for friends across the Atlantic.

The Prisoner, a 17-episode series, was first shown on ITV between 29 September 1967 and 1 February 1968, starring and co-created by Patrick McGoohan. He not only starred as No 6, but was also the creator and driving force behind the series. Many well-known actors had guest roles, including Leo McKern, Peter Bowles, Eric Portman, Patrick Cargill, Mary Morris, Paul Eddington and Donald Sinden.

It was a spy fiction, but had elements of science fiction, allegory, and psychological drama, fantasy, and a taste for the counter-cultural and architectural imagination and beauty. The series is rich in imagery and visual impact. The surreal architecture of the village with its Mediterranean atmosphere, is enriched by high-tech interiors, tannoys, surveillance cameras and piped music to create a bizarre combination. There is great attention to detail, from street signs to cans of food to village credit cards, Mini Moke taxis and staff uniforms. 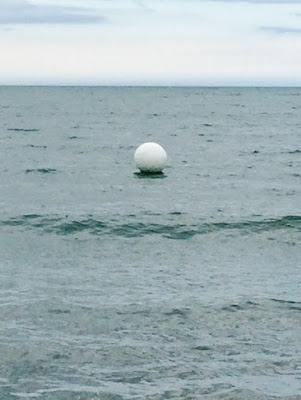 A reminder of ‘The Prisoner’ on the beach in Bray this afternoon (Photograph: Patrick Comerford, 2015)

The long-awaited final episode, “Fall Out,” had one of the largest-ever viewing audiences. But ITV’s telephone lines were blocked by the many millions of viewers who phoned in desperate for an explanation.

The Prisoner is the surreal story in a surreal setting of a secret agent (No 6, Patrick McGoohan) who is abducted and held prisoner in a mysterious coastal village where his captors try to find out why he has resigned abruptly.

He is held captive in a mysterious seaside village, isolated by mountains and sea. Large and menacing balloons, referred to as “Rover,” patrol the perimeter and capture or kill anyone who tries to escape. Captors and captives alike are known only by assigned numbers. The Prisoner who gives his name to the series is No 6, but he repeatedly rejects the label.

No 6, for his part resists defiantly: “I am not a number. I am a free man.” Or: “I will not make any deals with you. I’ve resigned. I will not be pushed, filed, stamped, indexed, briefed, de-briefed, or numbered! My life is my own.”

Most of the series was filmed in Portmeirion in North Wales, although this was not disclosed until the opening credits of the last episode at the request of Portmeirion’s architect, Sir Bertram Clough Williams-Ellis (1883-1978), who built Portmeirion (1925-1976) on his own private peninsula on the coast of Snowdonia.

However, with wonderful cricket this weekend, this was also a weekend to recall that the cricket match in one episode, “The Girl Who Was Death,” was filmed at Meopham Green in Kent. In this comic episode, first broadcast on ITV on 18 January 1968, the cricket match ends in the murder of a player (Colonel Hawke) with a bomb disguised as a cricket ball.

No 6 is on an operational assignment, perhaps in real time, perhaps before he came to the Village, or perhaps in an induced hallucination. Secret messages are passed to him at a shoeshine box. He picks up where Colonel Hawke left off in another match, but manages to avoid the same fate.

In the end, though, it turns out that the adventure was no more than a bedtime story No 6 was telling to children in the Village nursery. After putting the children to bed, he turns to the hidden camera and cheekily wishes: “Good night, children ... everywhere.” 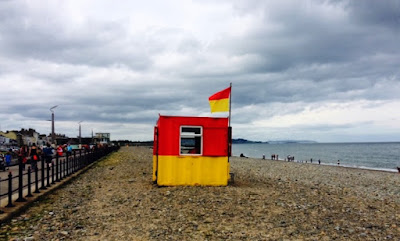 On the beach in Bray this afternoon (Photograph: Patrick Comerford, 2015)

The series asks more questions than it answers.

Why did he resign?

Who are his jailers?

The village is run by No 2, but why does his identity change from episode to episode?

Was No 6 the victim of a nervous breakdown?

Or, like us, is he a prisoner of himself?

Is this an allegorical conundrum or is it a statement about personal freedom, democracy and social engineering? 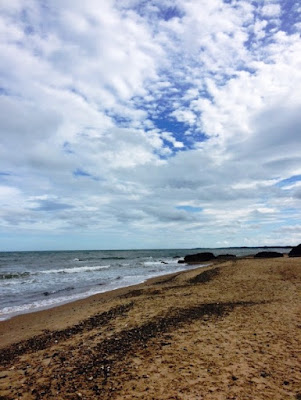 On the beach in Ballymoney, Co Wexford, on Saturday afternoon (Photograph: Patrick Comerford, 2015)

The beach in Bray this afternoon was my second beach to visit this weekend. Earlier, two of us had a late lunch in Carpe Diem. On Saturday afternoon, before a wedding reception in the Seafiled Golf and Spa Hotel Hotel, I went for a late afternoon stroll on the south beach in Ballymoney in north Co Wexford.

This small, quiet – almost hidden – beach has white sands and interesting rock formations, and received Green Coast Awards for 2015. It lies between the busy North Beach and Clones Strand.

The new sections of the motorway make Seafield only an hour or even less from Knocklyon.

Between these two beach walks, I was at the Cathedral Eucharist in Christ Church Cathedral, Dublin, this morning. The celebrant was the Revd Garth Bunting, the preacher was Canon Robert Deane, and the setting was The Short Communion Service by Adrian Batten (1591–1637), sung by the Christ Church Consort.

At the Cathedral Eucharist, I served as deacon, reading the Gospel (John 6: 35, 41-51) and assisting with the administration of the Holy Communion.

Having attended the Eucharist in Saint George’s Anglican Church in Taormina last Sunday and written about John Henry Newman’s visit to Taormina, I was brought back to Sicily as I listened to this morning’s offertory hymn, ‘Praise to the Holiest in the height’ by Newman, sung to the tune ‘Gerontius’ by JB Dykes.

We also had a feast of Orlando Gibbons this morning: the Communion Hymn, ‘Here, O my Lord, I see thee face to face’ by Horatius Bonar was sung to the Tune: Song 24 by Orlando Gibbons, and the Communion Motet was a setting by Gibbons for the Collect for the Third Sunday of Epiphany:

Almighty and everlasting God,
mercifully look upon our infirmities,
and in all our dangers and necessities
stretch forth thy right hand to help and defend us;
through Jesus Christ our Lord. 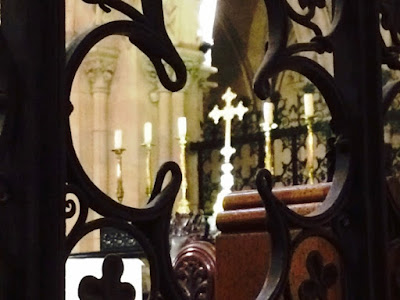 Our final, Post-Communion Hymn this morning was an adaptation of words by the 17th century Anglican priest-poet George Herbert (1593-1632):

During those two beaches during this weekend it was easy to repeat those words by George Herbert:

Let all the world, in every corner sing,
My God and King!
The heavens are not too high,
His praise may thither fly;
The earth is not too low,
His praises there may grow. 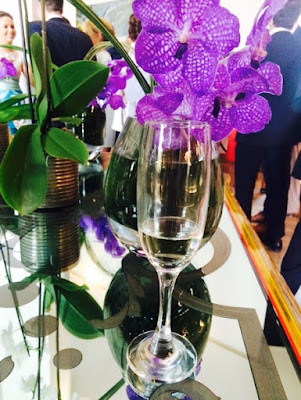