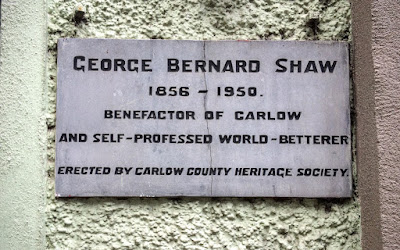 ‘Shaws – Almost Nationwide’ was the memorable advertising slogan for the chain of department stores that has come to epitomise middle Ireland. So memorable, that one comedian asked on stage how many more shops needed to open before the chain became ‘totally nationwide.’

As I passed by Shaw’s in the centre of Carlow at the weekend, I recalled Billy Shaw who built up the Carlow arm of that family empire, from 1949 until the 1990s. He was at the helm when Shaws took over Hadden’s Stores on North Main Street in Wexford in 1976.

The story of Shaws dates back to 1865 when the first drapery show was by Henry Shaw, and for decades, three Shaw brothers – Mervyn, Trevor and Billy – controlled Shaws. Billy Shaw was a patriarchal figure in Carlow, much loved by staff and customers alike, and his personal ties to the Carlow branch ran deep. When he died almost ten years ago at the age of 81, the Service of Thanksgiving at the Methodist Church on Athy Road was packed to overflowing.

Today, Shaws stores generate revenues of over €40 million a year. About 500,000 people visit Shaws stores every month, and the group employs close to 1,000 people. 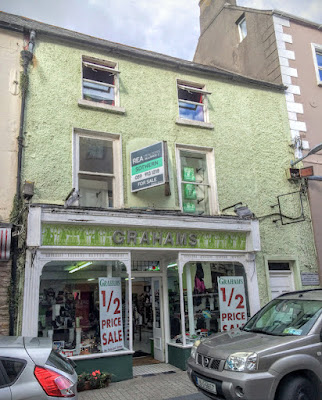 George Bernard Shaw is remembered with a plaque on a shopfront across the street from Shaws department store v(Photograph: Patrick Comerford, 2016)

But across the street from Shaws landmark department store in Carlow, a discreet plaque celebrates the town’s links with another, unrelated Shaw, the Nobel Irish playwright, George Bernard Shaw (1856-1950), who was one the quiet benefactors of Carlow Town.

Shaw was born in Dublin and in 1876, at the age of 20, he followed his mother and moved to London. There he became a successful author and wrote over 60 plays.

Shaw married Charlotte Payne-Townshend from Rosscarbery, Co Cork, in London in 1898. He made his first return visit to Ireland in 1905, when they stayed at his wife’s family home in West Cork. From that year on, they frequently spent holidays in Ireland, visiting Dublin and Cork for extended periods.

Almost 100 years ago, George Bernard Shaw visited Carlow town in February 1918 to see various properties in the town which he had inherited through descent from his mother’s grandfather, Thomas Gurly. Shaw’s maternal ancestors in Carlow can be traced back to the mid-1700s.

When he visited Carlow in 1918 to view his properties, Shaw stayed in the Railway Hotel. He later recalled how the proprietor presented him with a joint of ‘Carlow pig’ for supper. When he explained that he was a vegetarian, she told him he would not live long without eating meat. 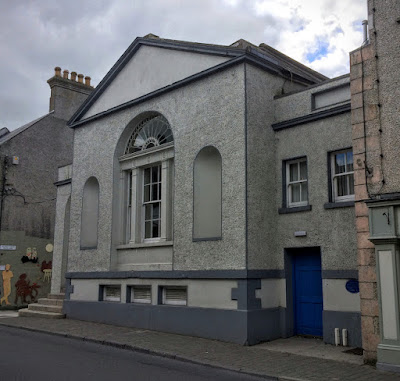 The Assembly Rooms on Dublin Street were built in 1794 and were inherited by George Bernard Shaw in 1899 (Photograph: Patrick Comerford, 2016)

The properties Shaw inherited in Carlow in 1899 through his uncle, Walter John Gurly, included the Assembly Rooms on Dublin Street. This neo-classical pedimented building with flanking blocks was built in 1794. The Assembly Rooms were used for dinners, balls and musical performances by the ‘nobility and gentry of the Co Carlow.’ Advertisements for these in the Carlow Post at the time usually had the addenda: ‘Servants not admitted into the ballroom.’

In 1912, the Silvester Brothers acquired the lease of the Assembly Rooms and set up a cinema which they called the Picture House.

In a lengthy letter, Shaw explained the many leases under which the Assembly Rooms were held, and how he had come to realise that that they ‘have always been a very bad bargain for me.’ He had cleared all the mortgages on the premises, but ‘I can neither sell them or let them at present, and of course, I can’t use them. If I assign them to a pauper and leave him to be evicted by the head landlords, I actually gain by the transaction.’

He wanted the building to be used for public purposes and, if possible, and he hoped that ‘the old front of the building – a façade which belongs to the best period of Irish architecture at the end of the 18th century – retained for the sake of its decorative effect.’

The Technical Instruction Committee converted the old ruin, preserving the façade that Shaw admired, into the two-roomed Carlow Technical School which opened in 1923. Two workshops were added in 1928, and in 1934 the whole building was rebuilt by the first Vocational Education Committee. A large, well equipped engineering workshop and a similarly up-to-date domestic science kitchen were then added.

Shaw visited Ireland for the last time in 1924 when he finished writing Saint Joan while he was staying at Parknasilla, Co Kerry.

On 13 May 1944, almost 30 years after his first visit to Carlow, Shaw made a bequest of his remaining properties in Carlow to Carlow Urban Council. He wrote to the council from 4 Whitehall Court, London, on 13 May 1944:

Will you be so good as to bring the following matter before your Council. I am the landlord of a property in Carlow which I inherited as the great-grandson of the Thomas Gurly whose monument is in one of your chief churches. It was formerly a considerable property, but it now yields a net revenue of only £150 a year. When it came into my hands I received nothing but the legal ownership, a bundle of mortgages and several dependent relatives. As I have cleared off the mortgages and provided otherwise for the surviving relatives, there are now no encumbrances, except the head rents.

I am an absentee landlord, having spent out of the 88 years of my life only one day in Carlow. The estate is managed by Major AJW Fitzmaurice of 1 Leinster Crescent.

I, therefore, propose to hand over the property to the Carlow municipality for the common welfare. I find, however, that this step, being unusual, is not easy. Nobody seems to know how it is to be done. If I propose to leave the property to some relative who might, like my grandfather mortgage it to the last farthing and leave it in a ruinous condition, I could do it without the least trouble. But to leave it to a public body for the public benefit seems to be impossible when the public body in question is a municipality. I have served for six years as municipal councillor on a London Borough Council governing a quarter of a million people. I therefore know the difficulties from the inside.

What I would beg the UDC to consider is this. Suppose I make a gift of the property to the Council on Trust for purposes which exclude its sale to private owners, the use of its revenue to relieve the rates directly, or for almsgiving in any form, confining it to improvements, house modernisation and experimental innovations, embankment of the river Barrow and, generally, for progressive work which would not otherwise be undertaken, would the Council accept the Trust, and establish a Standing Committee or Sub-Committee to administer it?

You may say that the property is too small to be worth considering for such purposes. 1 should reply that it represents solid land, the importance of which to a city is not fairly measurable by the income of its private landlord, and that I can stipulate that it shall not be a closed Trust but be the nucleus of a civic improvement Fund well advertised and open to all citizens who desire to follow my example, but, like myself, do not know exactly how to do it. It should not bear my name, nor that of any other individual, nor of any creed or political party. Its income could be left to accumulate within the limit allowed by the law against perpetuities to any extent thought necessary. Would the Council take it on these conditions?

I should, perhaps, mention that if it refuses, the property will pass after my death to the National Gallery of Ireland, to which in my boyhood in Dublin I owed much of my Art education, which enabled me to earn a living as critic before I made my mark as a playwright. It will, therefore, not be lost to Ireland in any case. But Carlow is clearly entitled to the first offer.


G. Bernard Shaw.
Shaw was putting into practice his socialist principles. He once said: ‘I want to die destitute as far as Eire is concerned. I can afford it. I can’t afford bother.’

However, Shaw found that Carlow Town Council could not accept his gift as it had no authority to accept gifted property. In 1944, he wrote to the Taoiseach, Eamon de Valera, asking his government to pass an Act to enable Carlow Town Council to accept his gift. In 1945, the Minister for Local Government, Sean McEntee, introduced the Local Authorities (Acceptance of Gifts) Bill 1945.

Shaw stipulated that the rents from the properties, amounting to £180, became part of a Civic Improvement Fund. He intended this to be the nucleus of a bigger fund, but this never materialised. The fund is now administered by the local council and Carlow Arts Council.

Shaw is the only person to have been awarded both the Nobel Prize in Literature (1925) and an Academy Award (1938).

Despite the warnings from the hotel landlady when he visited Carlow that one and only time in 1918, Shaw lived into venerable old age on his vegetarian diet. He died at the age of 94 on 2 November 1950 from injuries incurred after falling from a ladder while he was pruning a tree.

The school, now known as Carlow Vocational School, moved to the Kilkenny Road in the early 1970s. A portrait of George Bernard Shaw hangs in the main lobby of the school. Because of increasing enrolments Carlow Vocational School will move to a new building next year [September 2017]. The new institution will be called Tyndall College in honour of world famous scientist John Tyndall who was born outside Carlow town in Leighlinbridge in 1820. 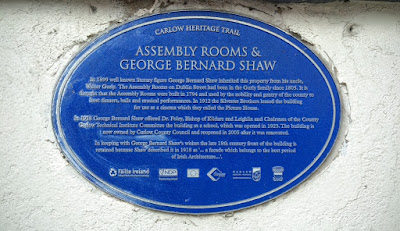 A plaque on the Assembly Rooms remembers George Bernard Shaw’s generosity to the people of Carlow (Photograph: Patrick Comerford, 2016)