A hint of summer in the bishop’s garden in Kilkenny

The Robing Room, a neo-classical garden pavilion in the the grounds of the former Bishop’s Palace in Kilkenny (Photograph: Patrick Comerford, 2012)

I spent most of today [Monday, 21 May 2012] in Kilkenny at meetings of the boards of USPG Ireland and USPG Northern Ireland. Part of the work today included preparing for next month’s meeting of the USPG council and the annual conference of USPG in Hoddesdon in Hertfordshire, near Cambridge and Saffron Walden.

The meetings were chaired by Bishop Michael Burrows, and we met in the Bishop’s House, behind the former Bishop’s Palace, now used as the offices of the Heritage Council.

The Georgian façade of the former Bishop’s Palace hides a complex series of building phases, beginning with a medieval hall and tower from the mid-14th century, with substantial alterations in the 17th, 18th and early 19th centuries.

As we headed off to lunch in Shimla on Dean Street, we strolled through the grounds of the former palace, and it was a delight to see how the mid-18th century Robing Room in has been restored in recent years.

The Robing Room is one of the hidden treasures of Kilkenny. It is said to hold secrets from a much older past, and was first built to connect the Bishop’s Palace with Saint Canice’s Cathedral.

As part of the recent restoration work, extensive archaeological excavations have been carried out at the Robing Room over the past two years by the local archaeologist Cóilín O Drisceoil of Kilkenny Archaeology.

The Robing Room is a little-known neo-classical garden pavilion, hidden within the mediaeval and early modern ecclesiastical buildings in the Cathedral Close. It stands in a corner of the grounds of the former Palace of the Bishops of Ossory.

The Robing Room was probably built around 1758 as part of an elaborate processional colonnade that linked the palace with the entrance to the north transept of the cathedral, 25 metres to the south.

However, evidence for the exact date at which when it was built is far from clear. Is there documentary and archaeological evidence to support for the belief that it was built by Bishop Richard Pococke with the colonnade ca 1758? Or was it built during the substantial remodelling of the palace by Bishop Este (1735-1740)? The earliest written account we have of the Robing Room being used as a bishop’s vestry is as recent as 1963. So, O Drisceoil asks, what was the primary function of this building? And how did it change over time?

Was an earlier building incorporated into the Robing Room? If so, what was its age? Is there evidence that it related to the Irishtown town wall or the ‘Paradise’ house of the 16th century?

A building appears on the site on Rocque’s map of Kilkenny in 1758, which helps to narrow down the date of that building to between 1739, when the precinct wall was built, and 1758. However, the building on Rocque’s map is a rectangular structure and not the ovoid building that I was admiring today.

A letter from Bishop William Newcome in 1755 shows that the Robing Room was used in his time as a summer-house within an ornamental garden setting, and that it was linked to the Colonnade.

A few years after the building was completed, the ground-storey was demolished and replaced with the ovoid neo-classical pavilion I was looking at today. Lavishly built for its time, the Robing Room even featured heated benches that were heated from an under-floor flue fire system.

This building cannot be attributed with certainty to Bishop Pococke, but Cóilín O Drisceoil says the evidence points to him for two chief reasons: the new building included a connection to the Colonnade, which Pococke had built around 1758, and the industrial entrepreneur William Colles designed and executed the Colonnade and stone from his Marble Mill was used in the Robing Room.

O Drisceoil points out that Pococke is the only Bishop of Ossory in the mid-18th century who had strong links with Colles. He speculates that the destruction of the earlier summer-house may have coincided with the bishop’s well-documented switch from the use of Gothic architecture to Palladian in his cathedral.

A map drawn in 1871 shows the Robing Room in some detail and indicates there was a covered walkway across Church Lane to the cathedral churchyard.

But what was the building originally used for?

Despite its name, there is no evidence was found that it was ever used as a robing room – the first mention of this in print dates from only in 1963. An account from 1775 specifically refers to it as a “summer-house.” As a summer house it formed an integral part of a Georgian garden layout, a designed landscape and vista that was created around the Palace.

And in the palace grounds in Kilkenny today, as the sun came out on our way to lunch, there was a hint that summer is on the way. 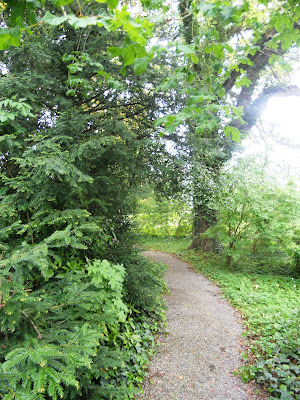 A hint of summer in the garden of the Bishop’s House, behind the former Bishop’s Palace in Kilkenny this afternoon (Photograph: Patrick Comerford, 2012)