Dinner in Damascus Gate becomes
a reminder of our shared humanity 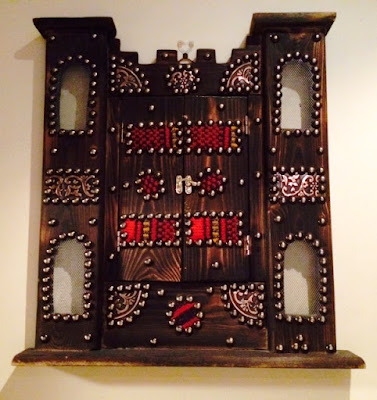 Dinner in Damascus Gate ... a reminder of an unshared crisis and a shared humanity (Photograph: Patrick Comerford, 2015)

The British Home Secretary is saying consistently and persistently that European countries should send home the asylum seekers who are rescued in the Mediterranean. She said it again in France yesterday [20 August 2015].

She continues to claim that the migrants rescued from the Mediterranean should be forcibly sent home.

While European countries continue to condemn the slaughter and genocide inflicted on the people of Syria and Iraq, it is extremely difficult to imagine how any European politician could think someone who has escaped ISIS would ever want to return to Iraq or Syria.

Compared to Turkey, Greece and Italy, Britain and Ireland have responded with little humanity to the crisis in the European/Mediterranean region. But at least the poor Irish response is redeemed to some degree by the humanitarian response of Irish naval personnel and vessels in the waters around Italy, Malta and Libya.

Mrs May says an EU quota forcing member states to accept a share of migrants would only encourage people traffickers - leading to more migrants embarking on the perilous sea crossing that has cost thousands of lives.

She argues that many of those who make the journey are economic migrants rather than refugees fleeing conflicts in countries like Libya and Syria.

As if the asylum seekers are on the move because of traffickers and not because of the crises in Syria and Iraq or the collapse of politics and economics in Libya.

Why should Turkey, Greece, Germany and Italy be forced to bear most of the cost of the present crisis? Greece cannot afford to, Germany at least is showing that there are many beating hearts among Germans, despite the cruel German demands on Greece.

What does Teresa May think should happen to the refugees that arrive every night on the shores of Kos?

That they should be left floating somewhere between Kos and Piraeus?

And we must remember that Isis was created by the failure of the West to respond appropriately to events in Iraq, Syria and Libya. Syria was demonised as part of the “axis of evil,” the crisis in Iraq is a consequence of lying about Saddam Hussein’s “weapons of mass destruction,” and Libya was bombed into its present crisis.

We must remember too that Isis is ideologically underpinned and financially resourced by Saudi Arabia, which is responsible for the current outrages in Yemen, for persecution of its own minorities, particularly Shia Muslims, and remains the West’s principal ally in the Middle East.

At present, there are only two occupying armed forced in Syria – Isis, which is armed, supplied and resurced by Saudi Arabia, and Israel, which has been occupying the Golan Heights, within striking distance of Damascus, for almost half a century.

Last night I had a wonderful experience of how Syrians are a rich part of the Mediterranean/European culture and have so much to bring with them that enriches northern Europe. 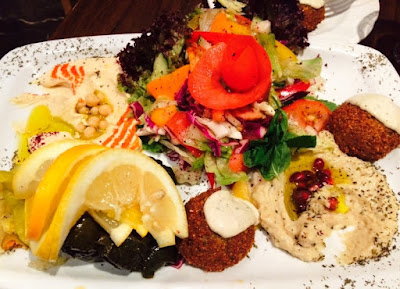 Last night, as Teresa May was showing a shocking lack of humanitarian understanding, but courtesy of a kind gift from students, two of us had dinner in one of my favourite restaurants in Dublin. Damascus Gate is at No 10 Upper Camden Street, close to Kelly’s Corner. The aromas, décor, and music are Syrian feasts in themselves.

The chefs are from Lebanon and Syria, one with 20 years, the other with 25 years of experience of cooking to the highest standards. Everything was fresh, from the herbs and spices, to the aubergines and falafels. 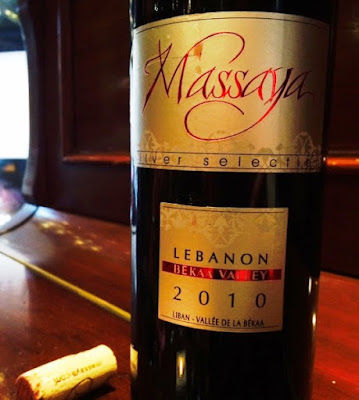 A bottle of wine from the Bekaa Valley in Lebanon (Photograph: Patrick Comerford, 2015)

It was all accompanied by a bottle of wine from the Bekaa Valley in Lebanon, and Syrian tea for one and Arabic coffee for the other.

Syria is not a foreign country, it is part of European/Mediterranean culture and civilisation, and even a selfish attitude would say Syrians have much to add that would enrich our lives.

But we have a long way to go before people stop seeing the people in small boats and inflatables in the Mediterranean as threatening numbers and start seeing them as part of our shared culture and part of suffering, bleeding, brutalised humanity. 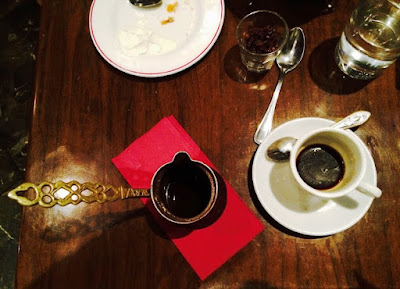