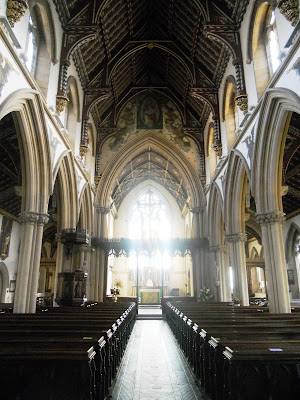 Inside the Church of Christ the Saviour ... the parish church of Ealing Broadway (Photograph: Patrick Comerford, 2012)

Not so today – at least, not in Ealing.

The Church of Christ the Saviour is the Church of England parish church of Ealing Broadway. Canon Andrew Davis is the Vicar and the church has long stood in the Catholic tradition of the Church of England. The parish has passed resolutions A and B and has opted for the pastoral oversight of the Bishop of Fulham. The Mass is celebrated at least daily, and the evening office is recited in public. This round of prayer is at the heart of all the church does. 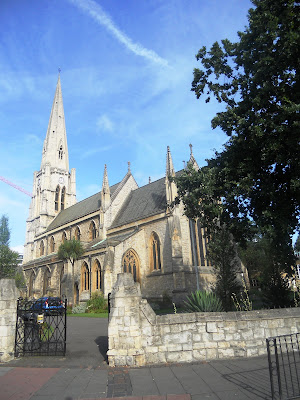 The Church of Christ the Saviour ... on a prominent position on Ealing Broadway (Photograph: Patrick Comerford, 2012)

The church, which occupies a prominent position on Ealing Broadway and attracts many visitors, is open every day between 8 am and 6 pm. It has a sense of peace and devotion and is in constant daily use for prayer and solitude by many people. The church says it built out of “living stones” and houses a parish community of local Anglicans. It is open to all, welcomes all, and has an exciting, varied, and challenging ministry rooted in the local community.

The church was designed by the architect Sir Gilbert Scott, and was paid for by Rosa Lewis, the daughter of a Liverpool merchant who had moved to Ealing.

In 1902, the church was considerably embellished by GF Bodley. A new sacristy was built and attached to the church by a “cloister” passage, the organ was rebuilt under the west tower arch, the rood screen, the chapel screens, and the statues of Saint James, Saint Paul and King David were added. The murals and the decoration of the roof were also completed.

A bomb that hit the other side of Ealing Broadway during World War II also blew out most of the glass of Christ Church and damaged the roof. The windows were restored with clear glass, though a few fragments of the old remain. One of the most impressive windows in the church today is the East Window depicting Christ the King. 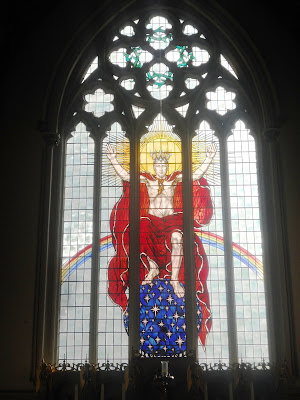 Saint Stephen’s Church, which is a short walk west of Ealing Abbey, dates from 1867, when ¬Christ Church on Ealing Broadway built a daughter church to serve North Ealing. Over the years, the church building was extended and a spire, almost 50 metres tall, was added in 1981 and still dominates the North Ealing skyline. However, subsidence closed the building in 1979. A new church, on the site of the old Church Hall, was built in 1987.

A second daughter church, Saint Saviour’s, was built in 1885 and became the parish church of a new parish carved out of Christ Church in 1916. The church stood within the boundary of Saint Saviour’s school, which is now Christ the Saviour Primary School.

Saint Saviour’s had a large following and was an active parish. When the church was destroyed by incendiary bomb during World II, a temporary church, “Little Saint Saviour’s,” was set up in the parish hall.

The church is a few steps away from Ealing Town Hall. A good walk south from Ealing Town Hall is Saint Mary’s Church, which has a longer history. There has been a church on this site for almost 1,000 years. Excavations in the 19th century unearthed solid blocks of stone and ornamental work suggesting a Norman building stood here.

At one time, Saint Mary’s was the only church in a large parish stretching from the Thames at Brentford north towards Wembley, west beyond Southall and east to Acton and Bedford Park. The only two roads from London to the West passed through the parish. But the Revd Richard Smart, who was the vicar of Saint Mary’s at the end of the 16th century, counted 427 inhabitants in this whole area.

During the Civil War of 1642, the church suffered badly at the hands of Cromwell’s troops and in 1650 a parliamentary survey described Saint Mary’s as “ruinated and lying open since the plundering.” After years of neglect, the mediaeval church was pulled down in the late 1720s. A new plain and simple Georgian church was built on the site, and opened on Trinity Sunday 1740. It forms the core the church that stands there today.

By the1830s, the village of Ealing had become a town, and Saint Mary’s had an important role in the community, overseeing the workhouse, providing schools, maintaining law and order, improving roads and street-lighting, distributing alms and collecting taxes.

By 1860, the parishioners believed it was time for a more imposing church. The newly-built Christ Church was attracting many worshippers, while Saint Mary’s “did not call forth feelings of reverence” and was too small for the growing population of Ealing.

The architect SS Teulon transformed the simple village church into a huge “Byzantine shrine” by greatly enlarging the church, decorating it with vibrant colours. But the parish had to struggle to find the money and some of his proposals, including a tall spire, were dropped.

On 30 May 1866, the new church was consecrated by Bishop Tait, who said Saint Mary’s had been “transformed from a Georgian monstrosity into a Constantinopolitan basilica.” The church was extensively refurbished and redecorated in the mid-1950s, and again in the 1980s.

Great Ealing School was founded by Saint Mary’s Church in 1698. It later became the “finest private school in England” and its pupils in the 19th century included William S Gilbert and Cardinal John Henry Newman. As the area became built-up, the school declined and it closed in 1908.

Over the years, Saint Mary’s Church has developed an evangelical tradition and no special services are planned for today. But back in Saint Saviour’s on Ealing Broadway, there is a mid-day Mass at 12.30, and at 7.30 this evening there is a Solemn Mass and Procession, followed by a reception, to celebrate the Assumption of the Blessed Virgin Mary.

The mass is being sung by members of members of the parish choir and the Schola Gregoriana of Cambridge, which promotes Gregorian Chant – also known as plainsong or plainchant, and which I have been hearing regularly in Ealing Abbey this week.

Posted by Patrick Comerford at 11:00 2 comments: