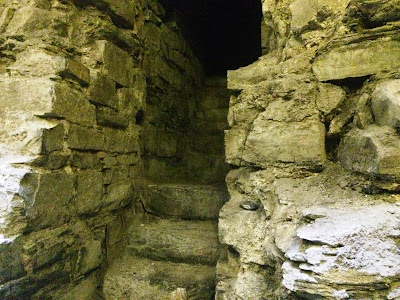 Surviving steps down to the river in the mediaeval remains of Dublin Castle (Photograph: Patrick Comerford, 2014)

I was in the city centre today, introducing a Facebook friend and distant cousin Charlie Comerford to Dublin, and especially to Christ Church Cathedral, Trinity College Dublin and Dublin Castle. He had flown over from Liverpool with his friend, William Cross, for the day, and we were due to meet in the morning. But, as the Scottish poet Robbie Burns knows,

It was a beautiful day to spend a morning sipping coffee outside the Arts Building in TCD and enjoying the sunshine in the grounds of Christ Church Cathedral. The sun was shining, the tourist queues waiting to see the Book of Kells were snaking around two sides of Fellows’ Square, and the ruins of the old cloister in Christ Church Cathedral are receiving careful attention trhat should make them accessible once again to tourists and visitors.

Eventually, after discovering it was mobile phone coverage and not diaries that were at fault, we met in the afternoon, thanks to the kind intervention of of the cathedral staff.

We visited Trinity College Dublin, the Mansion House, which is the official residence of the Lord Mayor of Dublin, the Round Room where the First Dail met in 1918, and Leinster House, before stopping in Keogh’s in South Anne Street. 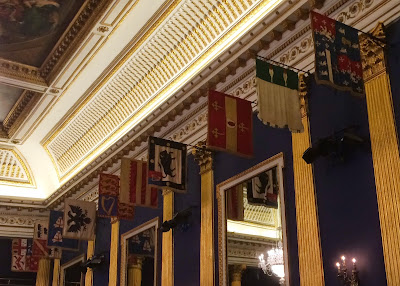 The banners of Knights of Saint Patrick in Dublin Castle (Photograph: Patrick Comerford, 2014)

Later, we strolled through Grafton Street, Wicklow Street, and South Great George’s Street, to Dublin Castle for a guided tour of the castle, the Chapel Royal, Saint Patrick’s Hall, the State Apartments, the Throne Room, and the mediaeval foundations of the original castle.

We ended up in Temple Bar, discussing ties of kinship, Irish pubs, de Valera’s place in Irish history, and the Book of Common Prayer of the Episcopal Church (TEC), before they set off to catch the last flight back to Liverpool. 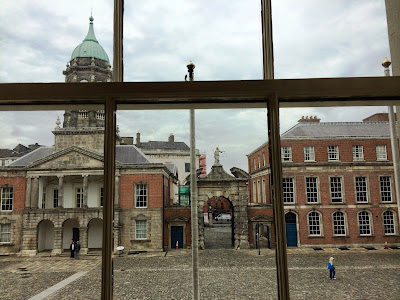 Looking out onto the Uper Courtyard in Dublin Castle from the State Apartments (Photograph: Patrick Comerford, 2014)

Meanwhile, back in Christ Church Cathedral, these are the closing days of the exhibition: “On Earth as it is in Heaven.” This exhibition, which was launched earlier this month [6 May 2014], brings words and images together to explore the meaning of Linen in the Bible.

The exhibition, curated by Margaret Barker and Bruce Clark, uses images from ancient Egypt and mediaeval Christian manuscripts as well as striking pieces of contemporary art.

It features specially commissioned photographs of early icons, including a Serbian fresco and a 1,500-year-old mosaic from Saint Catherine’s Monastery on Mount Sinai.

With the help of short texts translated from Hebrew, Greek and Latin, the exhibition sets out one of the most important chapters in the human spiritual story.

Dr Margaret Barker is an author and internationally acclaimed authority on the Jerusalem Temple and a past president of the Society for Old Testament Studies and the author of 16 books.

Bruce Clark is the on-line religion editor of the Economist and has worked as a foreign correspondent in France, Greece, Russia and the US. He grew up in Northern Ireland in the 300-year-old linen-making community of Upperlands. 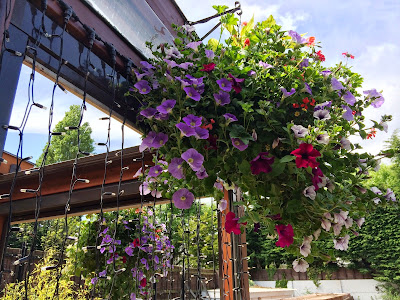 Next month, Christ Church Cathedral will be transformed into a floral arcadia from Friday 13 June until Sunday 15 June 2014, for the Dublin Garden Festival, with contemporary and classic arrangements designed by some of Ireland’s most talented and award–winning floral artists.

All proceeds from the festival are going towards the repair and restoration of the cathedral and grounds.

Inside, the cathedral will be filled with colourful floral displays each day, and well-known figures from the world of gardening and horticulture will offer visitors gardening advice. Outside, the grounds will be adorned with horticultural displays, Irish food produce, urban gardens, birds of prey, a petting zoo, craft demonstrations, live entertainment and an outdoor artisan food tent full of gourmet food.

Each day, gardening experts will speak in the South Transept on an array of topics from money-saving composting to creating an urban garden. They include Helen Dillon, Mathew Jebb, Christopher White, Fiann O Nuallain, Kitty Scully, Dermot O’Neill, Gerry Daly and Jane McCorkeral.

Music each day will include recitals and bird song and on Sunday afternoon there is a performance by the Cathedral Choir of Benjamin Britten’s Five Flower Songs.

The choirs of Christ Church Cathedral have developed a partnership with Barretstown Children’s Charity, which works with children suffering from serious illnesses, including cancer and blood disorder. Last Saturday, the Cathedral Choir, with members of the cathedral community and congregation, took part in a sponsored walk in the Dublin Mountains to raise money for Barretstown.

I hope to back in the cathedral tomorrow evening for the Eucharist at 6 p.m. celebrating Ascension Day. 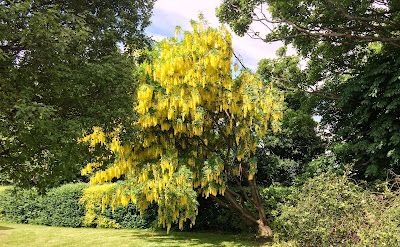 Laburnum in the grounds of the Church of Ireland Theological Institute today (Photograph: Patrick Comerford, 2014)