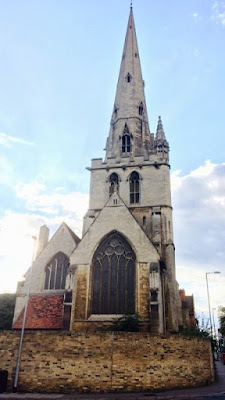 All Saints’ Church is in the heart of Cambridge, England, and has an interesting connection with Monaghan.

All Saints’ closed as a parish church in 1973 and since 1981 has been vested in the Redundant Churches Fund, now the Churches Conservation Trust. It is occasionally used for worship by a variety of groups and is kept open daily by volunteers and the students of Westcott House. When I dropped in recently, the church was hosting an exhibition by a local pottery group.

All Saints remains one of the best-preserved Anglo-Catholic Gothic Revival churches in England. The church was designed by the architect George Frederick Bodley (1827-1907) and was built in 1863-1864. The beautiful interior includes works by William Morris, Edward Burne-Jones, Ford Madox Brown, Charles Eamer Kempe, Frederick Leach, Wyndham Hope Hughes and other artists of the Pre-Raphaelite and Arts and Crafts movements.

All Saints was Bodley’s first church in the Decorated Gothic style of the early 14th century (1300-1320). It is one of his most successful churches and became his favourite.

The parish dates back to the Middle Ages. The original church stood opposite Trinity College and close to the Divinity Schools, on a site now marked by a triangular piece of land and a memorial cross. This was the old Jewish quarter of Cambridge, the church was known as All Saints in the Jewry and the vicars were appointed by Jesus College.

One of the early vicars of All Saints was Joseph Armitage Robinson (188-1933), a Cambridge theologian who is part of the long theological tradition that includes Charles Gore, Joseph Lightfoot, Fenton Hort and Brooke Westcott, and that reaches back to John Cosin, Lancelot Andrewes and Richard Hooker. He was one of the great Patristic scholars at the turn of the 19th and 20th centuries.

Armitage Robinson was part of the generation of Cambridge theologians that followed the great Dublin-born Patristic scholar, Fenton John Anthony Hort (1828-1892), who, with Brooke Westcott, was the editor of the New Testament in the Original Greek. But I was surprised to learn during recent visits to Cambridge that Robinson also had strong Irish family connections, for both his father and his mother were Irish-born.

His father, the Revd George Robinson (1819-1881), was the vicar of a poor Somerset parish near Bristol and Bath. George was born in Monaghan, where his father, Joseph Robinson (1782-1866), a printer and bookseller, lived at No 1 The Diamond, beside the parish church. Joseph was descended from a family that lived in the Seagie area of Co Armagh since the 17th century, and later in Monaghan and Clones. He cis buried in the vault of Saint Patrick’s Church, Monaghan.

George Robinson was educated at Trinity College Dublin and was ordained deacon (1844) for Donaghcloney in the Diocese of Dromore by Henry Pepys, Bishop of Worcester, and priest (1845) for Barr in the Diocese of Clogher by John Leslie, Bishop of Kilmore. In 1847, he moved to England, where he was curate in Saint James’s, Clapham, Vicar of Keysham, Somerset, and Vicar of Saint Augustine’s, Everton, Liverpool.

George Robinson was back in Ireland in 1854, when he married Henrietta Cecilia Forbes, in Collon, Co Louth. She was a daughter of Arthur Forbes and Caroline (Armitage) of Craigavad, Co Down. George and Cecilia had 13 children, including six sons who were priests and two daughters who were deaconesses. He died in 1881 in Marseilles, where he was buried.

Armitage Robinson studied classics and theology at Christ’s College, Cambridge, and graduated in 1881. After graduation, he was a Fellow of Christ’s College (1881-1889), and became a chaplain to Lightfoot, who had become Bishop of Durham in 1882. He then became Dean of Christ’s College (1884-1890), and was also Assistant Curate of Great Saint Mary’s, the university church in Cambridge (1885-1886) , before becoming Vicar of All Saints in 1888.

During Robinson’s three years at All Saints’ Church (1888-1892), artists from the Pre-Raphaelite and Arts and Crafts Movement continued to decorate and enrich the church. For a brief time (1891-1892), his curate at All Saints was one of his clerical brothers, Canon Forbes Robinson (1867-1904), a Fellow of Christ’s College, Cambridge. Forbes Robinson later became Chaplain of Emmanuel College (1891-1896) and Chaplain and Junior Dean of Christ’s College (1896-1904), and was an expert in the Coptic Gospels.

When Armitage Robinson resigned from All Saints, he became Norrisian Professor of Divinity (1893-1899) in Cambridge, and a canon of Wells Cathedral (1894-1899). As a theologian he succeeded to the mantle of the Cambridge ‘triumvirate’ of Westcott, Lightfoot and Hort. He wrote a commentary on the Epistle to the Ephesians, he visited the libraries of Venice with Archbishop Gregg of Dublin, visited Patmos and Athens, and was known for his work on Patristic texts, including the Didache, the Shepherd of Hermas, and the works of Saint Irenaeus, Saint Perpetua and Origen.

He moved to become the Dean of Wells Cathedral (191-1933), where he had close links with Dom Cuthbert Butler and the Benedictine monks of Downside Abbey, took part in the bilateral Anglican-Roman Catholic conversations at Malines convened by Cardinal Mercier and Lord Halifax, and became known for his publications in history.

Robinson received an honorary doctorate (DD) from Trinity College Dublin in 1908 and in 1920 he returned to his father’s alma mater as the Donnellan Lecturer, with a series of lectures on Barnabas, the Shepherd of Hermas and the Didache. When he died on 7 May 1933, he was buried in Wells Cathedral.

Five of the Robinson brothers were Church of England priests, a unique tally in any family. Apart from Armitage and Forbes, the others were: Canon Arthur William Robinson (1856-1928), a canon of Canterbury Cathedral and the author of several books, who inherited a house called The Wood (Kilnadrain, on the Emyvale Road), just outside Monaghan; the Revd John Robinson, who died while he was a CMS missionary in Nigeria; and Canon Charles Henry Robinson (1861-1925), who died while he was Editorial Secretary of the Society for the Propagation of the Gospel (SPG, later USPG, and now Us).

Another brother, Edward Forbes Robinson (1864-1921), was a missionary teacher in South Africa, where he died, and Dr Frederick Augustine Robinson (1870-1906), was a medical missionary with Universities’ Mission to Central Africa (UMCA), and died in Natal. Two sisters, Elizabeth and Cecilia, were deaconesses, and a third sister, Henrietta, married a priest, the Revd Charles Edward Bishop.

Canon Arthur Robinson’s son was the famous theologian, New Testament scholar and bishop, John AT Robinson (1919-1983), author of In the End God (1951) and Honest to God (1963), and Bishop of Woolwich (1959-1969). He studied theology at Westcott House and before becoming a bishop he was Dean of Clare College, Cambridge. After retiring as Bishop of Woolwich in 1969, he returned to Cambridge as a lecturer in theology and Dean of Trinity College, Cambridge. He preached his last sermon, ‘Learning from cancer,’ to a packed college chapel six weeks before he died.

The Robinsons are an outstanding clerical, theological and missionary family, but until my visits to All Saints’ Church I was not aware of their family roots in Ireland and the Church of Ireland.

This feature was published as the second of two half-page features on Saint Patrick’s Church, Monagahan, in the Northern Standard, Monaghan, on 21 January 2016, p. 14.
Posted by Patrick Comerford at 06:30 No comments: