Drinking to life, to
lives, to friendship, and
to the meaning of life 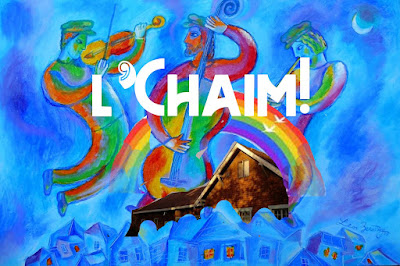 God would like us to be joyful,
Even when our hearts lie panting on the floor.
But how much more can we be joyful
When there’s really something to be joyful for?
To life, to life, l’chaim.

In Jewish tradition, the month of Elul is a time of repentance in preparation for the High Holy Days of Rosh Hashanah and Yom Kippur. The word Elul is similar to the root of the verb ‘search’ in Aramaic. Jewish sources from the 14th century on write that the Hebrew word Elul can be understood to be an acronym for the phrase in the Song of Songs, ‘Ani L’dodi V’dodi Li’ – ‘I am my beloved’s and my beloved is mine.’

Elul is seen as a time to search one’s heart and draw close to God in preparation for the coming Day of Judgment, Rosh Hashanah, and the Day of Atonement, Yom Kippur.

On this Friday evening, I am thinking of Tevye the Milkman and reflecting on how he drinks to life. Tevye is the fictional narrator and protagonist in a series of short stories by Sholem Aleichem first published in 1894, including the adaptations for the stage musical Fiddler on the Roof (1964) and its film adaptation (1971).

Tevye is the patriarch of a Jewish family in the village of Boyberik. Although it has been renamed Anatevka in Fiddler on the Roo), it is based on the town of Boyarka, 20 km south-west of Kyiv in Ukraine, then part of the Russian Empire.

In Hebrew, L’chaim (לְחַיִּים) means ‘to life’ and also, ‘for life.’ Perhaps ‘for life’ is a better translation of ‘l’chaim’ in Tevye’s song.

Life is never simple nor easy, and rarely goes as planned. L’chaim teaches us that the past is behind us — the good and the bad. L’chaim is a directional phrase pointing to the future. But we also know full well that we may not be able to control things that happen to us, and that our lives all to easily are turned upside down.

In his song, Tevye asks for prosperity, for good health and for good fortune. But not all of life’s possibilities and choices turn out to be pleasant ones.

Tevye’s toast, L’Chaim, is, of course, celebrating life. But the word chaim for life, as used in Genesis 2: 7, ends with -im, a grammatical indicator of plurality. God did not create life as chi but as chaim (plural).

The courtyard of the Etz Hayyim Synagogue in Chania, the only surviving synagogue in Crete … its name (בית הכנסת עץ חיים‎) mean Tree of Life (Photograph: Patrick Comerford)

It is interesting that the Hebrew word chaim (חַיִּים) is in the plural. In fact, it is impossible to say the word ‘life’ in Hebrew in the singular form. In a similar way, one of the Biblical names for God, Elohim, has a plural form, even though it is always understood as God in the singular.

Chaim means alive or life. As a noun, it is treated as a plural: chaim arukim, a long life – arukim is in the plural. In the first blessing before the Shema in Morning Prayers, the phrase Elokim chaim is now understood to mean: ‘God [who is] alive.’ If it meant that, however, it would read: Elokim chai. The plural of the noun chaim remains unchanged: chaim.

The sages teach that the two Yods located between the Cheth and the Mem in Chaim (חַיִּים) when combined form the name of God. The sages said one of the names of Messiah is Chaim, disclosing one of the defining characteristics of the Messianic Age.

The Talmud tells about the sage, Choni HaM’agel (‘Choni the Circle Maker’) who once fell asleep in a secluded area and awoke 70 years later. When he discovered that all of his companions and friends had died long ago, he prayed to God that he too would die. The Talmudic sage, Rava, later commented on this story, ‘O Chavruta O Mituta – give either companionship or death.’

Without companionship and friendship, is life worth living?

The Talmud points out how people are often forced into social or literal isolation because of their circumstances. For example, the poor are shunned from mixing with the more affluent in society; a Metzorah or person with a disease is quarantined and isolated; a blind person may become housebound; people with no children are often left out of social conversation. Each one finds their involvement in society is seriously diminished, and find their life is less of a life.

Perhaps the most fundamental reason for life to be written in the plural form is to teach us that life can only be truly experienced when it is shared with others. A person who lives in a vacuum, or secluded on a mountaintop, is not truly alive. We need to be involved in society and to share our lives with others: the plural chaim.

The Talmud says that when two people share a drink together, it brings them closer together. In light of this, the Tzemach Tzedek, Rabbi Menachem Mendel of Lubavitch (1789-1866), the third Rebbe of Chabad, said that when two people, for whatever reason, share a drink and wish each other ‘l’chaim,’ they draw down peace and blessings into the world.

Life is meant to be lived sharing with others.

Praying with USPG and the music of
Vaughan Williams: Friday 26 August 2022 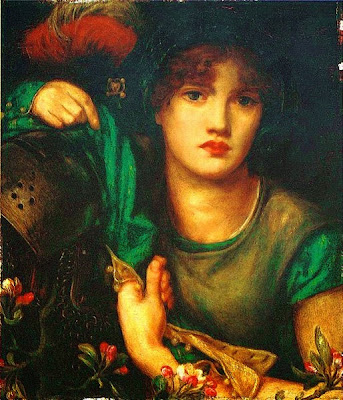 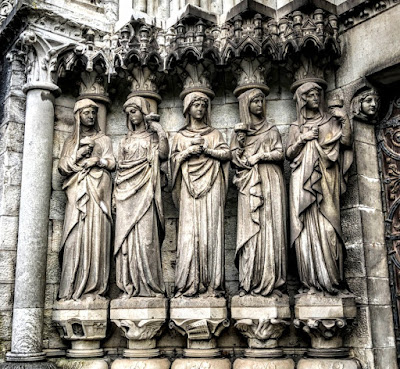 The Gospel reading in the Lectionary of the Church of Ireland today is:

For my reflections and devotions these weeks, I am reflecting on and invite you to listen to a piece of music or a hymn set to a tune by the great English composer, Ralph Vaughan Williams (1872-1958).

This morning [26 August 2022], I invite you to join me in listening to his ‘Fantasia on Greensleeves.’

The word fantasy or fantasia is sometimes used in music to describe a work that does not follow any set form or pattern. It is also used for compositions that are based on another musical work, like the ‘Fantasia on Greensleeves.’

This is England’s classic folk song of all time. It dates to the mid or late 1500s, and folklore says it was written by Henry VIII for his future queen Anne Boleyn. The story says Anne Boleyn rejected his attempts to seduce her and this rejection may be referred to in the song when the writer’s love ‘cast me off discourteously.’

However, the piece is based on an Italian style of composition that did not reach England until after the death of Henry VIII, making it more likely to be Elizabethan in origin.

The earliest known source of the tune is in the Library of Trinity College Dublin (Ms. D. I. 21, ca 1580), where it is known as William Ballet’s lute book. There the tune is given in the melodic minor scale.

A broadside ballad with this name was registered at the London Stationer’s Company in September 1580 by Richard Jones, as ‘A Newe Northen Dittye of ye Ladye Greene Sleves.’

Six more ballads followed in less than a year, one on the same day, 3 September 1580 (‘Ye Ladie Greene Sleeves answere to Donkyn hir frende’ by Edward White), then on 15 and 18 September (by Henry Carr and again by Edward White), 14 December (Richard Jones again), 13 February 1581 (Wiliam Elderton), and August 1581 (White’s third contribution, ‘Greene Sleeves is worne awaie, Yellow Sleeves Comme to decaie, Blacke Sleeves I holde in despite, But White Sleeves is my delighte’).

It then appears in the surviving A Handful of Pleasant Delights (1584) as ‘A New Courtly Sonnet of the Lady Green Sleeves. To the new tune of Green Sleeves.’

The tune is found in several late 16th century and early 17th century sources, such as Ballet’s MS Lute Book and Het Luitboek van Thysius, as well as various manuscripts preserved in the Seeley Historical Library at the University of Cambridge.

In Shakespeare’s The Merry Wives of Windsor, written around 1602, the character Mistress Ford refers twice without any explanation to the tune of ‘Greensleeves.’ Falstaff later exclaims:

Let the sky rain potatoes! Let it thunder to the tune of ‘Greensleeves’!

These allusions indicate that the song was already well known at that time.

One possible interpretation of the lyrics is that Lady Green Sleeves was a promiscuous young woman and perhaps a prostitute. At the time, the word ‘green’ had sexual connotations, most notably in the phrase ‘a green gown,’ a reference to the way that grass stains might be seen on a woman’s dress if she had engaged in sexual intercourse on the grass.

An alternative explanation is that Lady Green Sleeves was, through her costume, incorrectly assumed to be sexually promiscuous. Her ‘discourteous’ rejection of the singer’s advances supports the contention that she is not.

In Nevill Coghill’s translation of The Canterbury Tales, he explains that in Chaucer’s times green ‘was the colour of lightness in love. This is echoed in ‘Greensleeves is my delight’ and elsewhere.’

From as early as 1686, Christmas and New Year texts were associated with the tune. By the 19th century, almost every printed collection of Christmas carols included some version of words and music together, most of them ending with the refrain ‘On Christmas Day in the morning.’

One of the most popular of these carols is ‘What Child Is This?’, written in 1865 by William Chatterton Dix. 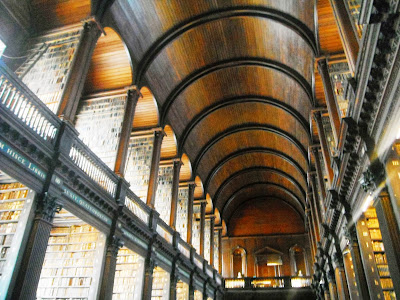 The earliest known source of the tune ‘Greensleeves’ is in the Library of Trinity College Dublin (Photograph: Patrick Comerford)

The theme in the USPG prayer diary this week is ‘The Pursuit of Justice.’ This theme was introduced on Sunday by Javanie Byfield and Robert Green, ordinands at the United Theological College of the West Indies.

We pray for the United Theological College of the West Indies, a diverse and ecumenical institution which prepares lay and ordained men and women for mission and service in the Caribbean church. 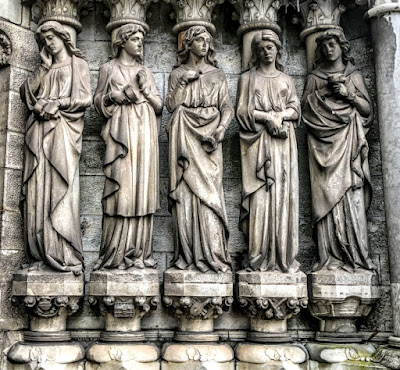