Saint James: a Victorian
church in Northampton that
recalls a mediaeval abbey

The Parish Church of Saint James in Northampton was designed by Robert Wheeler (Photograph: Patrick Comerford, 2023)

One of the churches I visited during my walking tour of Northampton last week is the Parish Church of Saint James on Saint James’s Road, about 1.5 km west-north-west of the town centre. The Saint James area is known locally as ‘Jimmy’s End’, and the Parish of Saint James has a diverse population, from many ethnic backgrounds and traditions.

Saint James’s Church may be the finest late 19th century polychrome churches in England. It shows all the qualities of a muscular Christian church built for the town’s increasing artisan population in the last quarter of 19th century.

The area is named after Saint James’s Abbey or Northampton Abbey, which was founded by William Peverel in 1104-1105. This Augustinian monastery was located in the Abbot’s Way area, off the south side of Weedon Road in the town.

Excavations were carried out on the site to determine the location and remains of any parts of the abbey. The abbey and a cemetery were located. The main buildings were preserved beneath the new housing development. The cemetery was excavated during winter 2000-2001. The bones were analysed to determine the health and burial practices in the late mediaeval population of Northampton.

In all, 294 burials were uncovered in well-ordered rows, with many wooden coffins, graves lined with old ceramic roof-tiles, stone-lined graves and a single stone coffin suggesting the occupants of relatively high status.

The later use of the cemetery was less orderly. Burials were in simple, shallow graves with just a shroud. On the south side was a stone-built building with two mortuary chapels. One had a stone-lined tomb, and a fragment of life-sized sculptured leg, with chain mail and a stirrup strap from a broken effigy. This effigy may have been broken at the dissolution of the abbey in 1538. A highly decorated grave slab and the remains of two skeletons had been unearthed in 1970.

The Saint James area west of the town centre grew up in the parts of the parishes of Dallington and Duston beside Northampton. The area developed from the mid to late 19th century with the expansion of the shoe manufacturing and engineering industries. There were three shoe factories, a tannery, saw mills and a cycle works, and the railway arrived from London in 1881.

Victoria Park was opened in 1898 on land donated by Earl Spencer of Althorp. Further land was acquired from the Earl in 1910 and 1911.

The Parish Church of Saint James on Saint James’s Road was built in 1868-1871 to designs by the Victorian architect Robert Wheeler (1830-1902) of Tonbridge, Kent.

Wheeler is not so well-known today, but he was industrious, designing many churches, chapels and schools. Most of his work is in Kent and along the south coast, and he has at least one church in Essex. His work tends to be modestly sized, and favoured brick, sometimes with polychrome brick interiors.

Work on building Wheeler’s church began in 1868. The design adopts the Early English style of church architecture, and this is greatly enhanced by the architect’s brilliant orchestration of building materials.

Internally, the church is even richer, and the brick is exposed and enriched with black bricks. Here, Wheeler uses red and black bricks to create strong geometric patterns on the walls. His stunted columns are in polished pink granite.

The near contemporary pulpit takes up the chromatic theme, with beige and green marbles on a limestone and brick base.

The church was completed in 1924, when the tower designed by GH Stevenson was built.

The pulpit in Saint James’s Church includes beige and green marbles on a limestone and brick base (Photograph: Patrick Comerford, 2023)

Saint James is home to the Northampton Saints Rugby Football Club at Franklin’s Gardens stadium on the south-west side of lower Weedon Road. The club was established in 1880 under the original title of Northampton Saint James by the Revd Samuel Wathen Wigg, a curate of Saint Jamess’ Church.

The Sixfields Stadium used by Northampton Town Football Club, known as ‘The Cobblers’, is at the top end of Weedon Road in the area known as Sixfields. The club plays in League Division Two.

The factory of Church’s, the footwear manufacturer, is on Saint James’s Road, between Sharman Road and Spencer Street. It was founded in 1873 by Thomas Church, and the company is now owned by Prada.

Before today becomes a busy day I am taking some time for prayer and reflection early this morning.

These weeks, between the end of Epiphany and Ash Wednesday, are known as Ordinary Time. We are in a time of preparation for Lent, which in turn is a preparation for Holy Week and Easter.

In these days of Ordinary Time before Ash Wednesday later this month (22 February), I am reflecting in these ways each morning:

1, reflecting on a saint or interesting person in the life of the Church;

2, one of the lectionary readings of the day; 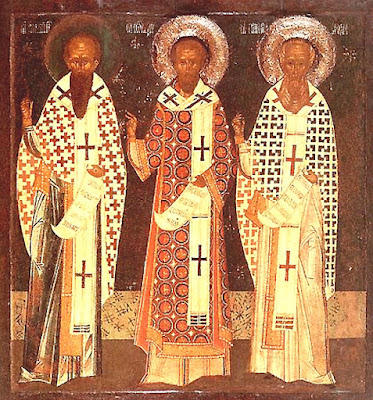 The Three Hierarchs (Οι Τρεις Ιεράρχες) in the Orthodox Church are Basil the Great (Basil of Caesarea), Gregory the Theologian (Gregory of Nazianzus) and John Chrysostom, three bishops in the early church who were influential in shaping Christian theology.

In the Eastern Church, they are known as the Three Great Hierarchs and Ecumenical Teachers, while in the Western Church the three are honoured among the Doctors of the Church.
Disputes raged in 11th century Constantinople about which of the three hierarchs was the greatest. Some argued Saint Basil was superior to the other two because of his explanations of Christian faith and monastic example. Others said Saint John Chrysostom, the ‘Golden Mouthed’ Patriarch of Constantinople, was unmatched in both eloquence and in bringing sinners to repentance. A third group preferred Saint Gregory the Theologian because of the majesty, purity, and profundity of his homilies and his defence of the faith against the Arian heresy.

All three have separate feast days in January: Saint Basil on 1 January, Saint Gregory on 25 January, and Saint John Chrysostom on 27 January.

The Eastern Church teaches that the three hierarchs appeared together in a vision to Saint John Mauropous, Bishop of Euchaita, in 1084, and said they were equal before God: ‘There are no divisions among us, and no opposition to one another.’ Because of this, the Byzantine Emperor Alexios I Komnenos proclaimed a feast day on 30 January commemorating all three in common.

The celebration of the Three Hierarchs took place in the Greek Orthodox Church in Stony Stratford on Sunday (5 February 2023) after the Divine Liturgy.

The bell above the Church of Aghios Vassilios (Saint Basil) in Koutouloufári, a mountain village in Crete (Photograph: Patrick Comerford)

14 Then he called the crowd again and said to them, ‘Listen to me, all of you, and understand: 15 there is nothing outside a person that by going in can defile, but the things that come out are what defile.’

17 When he had left the crowd and entered the house, his disciples asked him about the parable. 18 He said to them, ‘Then do you also fail to understand? Do you not see that whatever goes into a person from outside cannot defile, 19 since it enters, not the heart but the stomach, and goes out into the sewer?’ (Thus he declared all foods clean.) 20 And he said, ‘It is what comes out of a person that defiles. 21 For it is from within, from the human heart, that evil intentions come: fornication, theft, murder, 22 adultery, avarice, wickedness, deceit, licentiousness, envy, slander, pride, folly. 23 All these evil things come from within, and they defile a person.’

The theme in the USPG Prayer Diary this week is ‘Christianity in Pakistan.’ This theme was introduced on Sunday by Nathan Olsen.

The USPG Prayer Diary today invites us to pray in these words:

Let us pray for mission agencies seeking to promote the Gospel. May they listen to the communities amongst whom they work and seek to demonstrate love in action.

The Monastery of Vatopedi on Mount Athos has the skull of Saint John Chrysostom (Photograph: Patrick Comerford)