A much-needed walk on a crescent-shaped beach 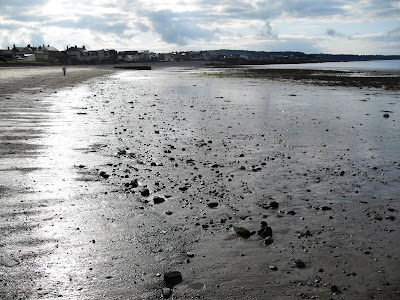 I took a quick run out to Skerries this afternoon for my much-needed beach walk.

We parked on Strand Street, and dropped into Gerry’s to pick up the Guardian and into the Skerries Bookshop to pick up the special edition of the Skerries News, which looks at the way this community pulled together in the past week or two in the search for two missing fishermen, Ronan Browne and David Gilsenan.

From there, we went for a walk along the North Strand in front of Skerries Sailing Club and just beside the beautiful harbour and the walk-way leading to Red Island.

This pebbly, cove-like, crescent-shaped beach is 1.2 km in length, and on this breath-taking afternoon there was a clear view across to the Mountains of Mourne on the south Down coast.

We strolled back through the beautiful houses of Hoar Rock – some, it appears, built as if they were on Malibu Beach.

I was hoping to get back to the Olive on Strand Street, which has the best double espresso in Fingal. The café has extended its tables onto the pavement, adding to its capacity. But by now it was 6 p.m., and we had missed our opportunity for a late evening coffee.

The low tide made it possible to walk across to Shenick Island this evening (Photograph: Patrick Comerford, 2011)

At Holmpatrick, we stopped in amazement as we realised the low tide had left a virtual causeway out to Shenick Island and its Martello tower, as people, in twos and threes, were using the opportunity to walk over to the largest of the islands off Skerries.

Shenick Island gets its name from the Irish sionnach, meaning “a fox.” Standing at one end of the island is a Martello tower. In 1878, a war broke out between the farmers of Rush and Ian Hamilton, the landlord of Skerries. Traditionally, the farmers of Rush had gathered the seaweed on Island as a fertiliser for their crops, but Hamilton wanted them to pay for each load of seaweed they collected, built a wall to prevent them reaching the shore and blocked their route out to the island.

The poor farmers could have walked out this evening.

Shenick Island was bought by Lawrence McDonagh in 1917 and it was farmed by his family until the 1950s. Today its only inhabitants are seals on the western side of the island and a few different species of seabirds. Since 1987, the island has been run as a wildlife reserve by the Fingal branch of the Irish Wildbird Conservancy Council.

The laneway corner where the Revd Anthony Tanner was murdered in Loughshinny in 1741 (Photograph: Patrick Comerford, 2011)

From Skerries, we drove back to Loughshinny, to photograph the laneway where the Revd Anthony Tanner, Vicar of Holmpatrick and Balscadden, was murdered 270 years ago in 1741, and to retrace the Millennium Historic Walk, which we had walked a few weeks ago.

The sun was still shining on the Irish Sea as we drove south past Kenure towards Rush and Rogerstown.

I’m back in the area tomorrow morning [Sunday 17 April] for Morning Prayer in Holmpatrick Parish Church at 10.30 a.m. and Holy Communion in Saint George’s Church, Balbriggan, at 12 noon.

.
Posted by Patrick Comerford at 22:19 No comments:

‘It was as if summer surprised us’ 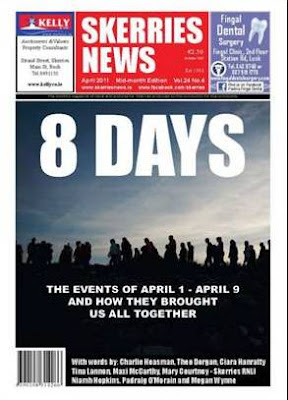 A special, mid-month edition of the Skerries News was produced this week (April 2011, Vol 24, No 11) to mark the events over the eight days of 1 to 9 April “and how they brought us all together.” The contributors to this special edition include David Diebold, Emily Diebold, Charlie Heasman, Theo Dorgan, Ciara Hanratty, Tina Lannon, Maxi McCarthy, Mary Courtney, Niamh Hopkins, Padraig O’Morain and Megan Wynne.

The inside back cover (page 35) includes the following reflection:

‘It was as if summer surprised us’

It was a beautiful, sun-kissed day in Skerries on the afternoon of April 9th. The week to then had been filled with emotion, heartbreak and tragedy for the people of Skerries.

This is a community that has pulled together, with solidarity, with love and with compassion over the past week, waiting and praying for two missing fishermen and lovingly caring for their families.

Ronan Browne and David Gilsenan were lost at sea on Friday April 1st. Their bodies were recovered early April 9th off the Co Louth coast near Clogherhead.

Local volunteers from the Royal National Lifeboat Institution, teams of neighbours, friends and strangers, spent every daylight hour that week searching the beaches of north Dublin, Co Meath and Co Louth for the two companions. Sailors and trawler crews joined the search at their own expense. Garda divers, Air Corps pilots and naval crews have braved the waves and the sea.

By Wednesday evening, community solidarity was so coherent that thousands of people took part in a walk of solidarity with those involved in the search. On Friday night, candles were lit across Red Island in prayerful hope.

That search for the men came to an end early on a Saturday morning, when they were found by the Guiding Light. Their funerals followed two days later. The tragedy continues for the families of Ronan and David.

Throughout the tragedy of the past week, the Skerries Facebook page has kept the wider community and people beyond informed of every development, offering people much-needed opportunities to express their grief, and to share their prayers and hopes.

For the people of Skerries, there is a new sense of community and togetherness, new depths of caring and of love.

TS Eliot opens his poem The Waste Land with the words:

But on this afternoon, it was difficult to imagine the sea could have taken its cruel toll or that April is the cruellest month.

The tide was out, the sea was calm, children were skipping in and out of the gentle waves, a handful of people were out on the water in kayaks and canoes, the sun was shining, the Harbour Road was full of cheery people who were spilling out of the pubs, sipping in their drinks in the bright sunlight, and the car park spaces on Red Island and along the Strand were filled with cars from families eager to enjoy what felt like an early twinkle of summer.

It was as if, as Eliot goes on to say, “Summer surprised us.”

This afternoon, as we walked the South Strand, then around the Harbour, and back to the Olive in Strand Street, there was a feeling that this is a community that has many blessings.