A challenge to the Church as winter closes in

Winter has closed in on Skerries ... the Harbour at dusk late this afternoon (Photograph: Patrick Comerford, 2011)

Winter has closed in on Skerries. The clocks have gone back, darkness is closing in earlier and earlier each evening, and the rain and the winds had returned this afternoon.

Halloween had already arrived earlier in the day, with bonfire material being collected throughout Fingal in north Co Dublin – and being lit in some places. Younger teenagers were scurrying through fields, little children in costumes were holding parents’ hands as they wandered through the streets of Lusk, Rush and Skerries, building up their anticipation and expectation for the evening ahead.

One imaginative and creative mind in Lusk already had a humorous take on the evening ahead, with a flying witch crashing into a pole on her brookstick. 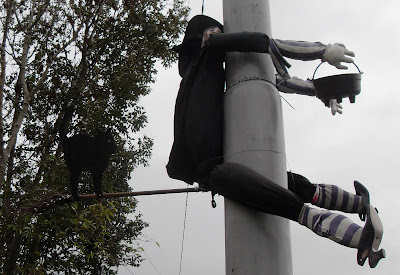 In Skerries, the cafés and pubs were busy, despite the wind and rain. The tide was high, and the waters in the harbour were swelling and were a mixture of grey and Joycean snot-green in colour.

Back in Olive on Strand Street, where they know how to make the best double espresso, there was still an opportunity to sit in the open, albeit under the awning, and watch the rain pour down on Strand Street. 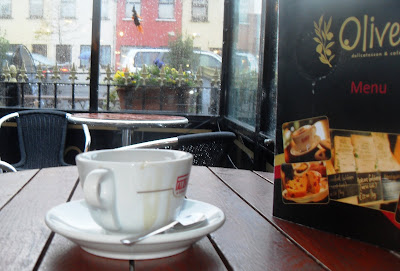 The best double espresso ... a table at the Olive in Strand Street, Skerries, this evening (Photograph: Patrick Comerford, 2011)

Later, the beach at the South Strand was deserted apart from a few strollers and a dog or two, and the tide was high.

But we are never alone. Tomorrow is All Saints’ Day. If it is not celebrated appropriately in our churches, with the Eucharist, how do we explain to a younger generation what Halloween is all about?

It is the Night of the Living Dead ... for the saints are alive, and we are part of the Communion of Saints, the Church Triumphant (Ecclesia Triumphans) and the Church Militant (Ecclesia Militans) are one Churchof and are together.

Halloween, or the Eve of All Hallows, is the evening before celebrating All the Saints, All the Holy Ones in Glory, the Saints of every time and place. This is the Eve of a Great Feast of Light – the Solemnity of All Saints, the saints in glory who have “inherited the light” (Colossians 1: 12-13), whether we are alive or dead, whether we have been canonised or faded into obscurity, whether they have given heroic examples in their lives, or they are unsung and unknown. We are all with God in endless joy.

And if we cannot explain Halloween and All Saints’ Day, how can we hope to explain the greater truths of Christmas and Easter?

On my way home, I was taken aback to see Christmas lights already lit up on the facade of Saint Joseph’s Church in Terenure. Why – it’s not even Advent?

But then the Church beyond Dublin is finding it hard to make the connection between being and doing, explaining and living. As the afternoon turned to evening, the news came that the Dean of Saint Paul’s Cathedral, London, the Right Revd Graeme Knowles, has resigned.

If the dean’s resignation, and the earlier, principled resignation of Canon Giles Fraser, are not to be in vain, then Bishop Richard Chartres must quickly reverse the disastrous decisions that have been taken about the protesters camped out in Paternoster Square.

Already, the credibility of the Church is being sorely tested.
Posted by Patrick Comerford at 20:11 No comments: