Spending a weekend in Dugort on Achill Island 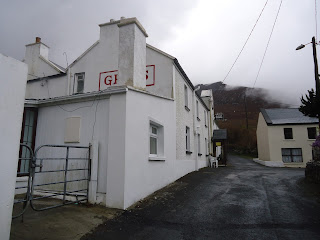 I am back on Achill Island, off the Co Mayo coast, for the second time this year, having spent a weekend here in February.

This time, I am back for the ninth annual Heinrich Böll Memorial Weekend which opens this evening [Friday, 3 May] and continues until Monday [6 May].

This year, the Heinrich Böll Memorial Weekend is focusing on the work of the American painter Robert Henri, who worked on Achill 100 years ago this year, and the programme includes a series of readings to celebrate the contribution to literature by the Achill-born poet John F Deane, marking his 70th birthday.

The weekend will be formally opened at 7.30 this evening in the Cyril Gray Memorial Hall, Dugort, by the Revd Professor Enda McDonagh, the Mayo-born former Professor of Canon Law and Moral Theology in Maynooth, and until recently an ecumenical canon of Saint Patrick’s Cathedral, Dublin.

A documentary exhibition of reproductions of Robert Henri’s Achill portraits is being held at Áras Forbairt Acla, Crumpaun, Keel, over the weekend. After Enda McDonagh opens the weekend, the American curator Valerie Ann Leeds will speak on the work of Robert Henri in Achill: ‘Robert Henri: From New York to Corrymore.’

Tomorrow [Saturday] morning, the archaeologist Eoin Halpin leads a guided walk around Corrymore House and Lake. In the afternoon, the Heinrich Böll cottage will be open to the public. There will be a poetry reading at the Cyril Gray Hall with Father Padraig J Daly, Fiona Sampson, James Harpur, and Harry Clifton, followed by a creative-writing seminar hosted by poets Eva Bourke and Gerard Smyth. The visual artist René Böll will also give a lecture on research work on Cillíní on Achill Island.

In Keel, Tom McNamara of the Boley House will speak on ‘Identifying the sitters: Robert Henri’s portraits of children from Dooagh,’ and the artist Deirdre Walsh will give a talk, ‘The Art Spirit, Robert Henri’, focusing on his influence as a teacher.

On Sunday morning, I am taking part in guided walk on Inishbiggle Island, led by Sheila McHugh, and I am speaking in Holy Trinity Church on the island on on the history of the Church of Ireland on Inishbiggle. This will be followed by poetry readings from Paddy Bushe, Eva Bourke and Jan Wagner, with an introduction by Mechtild Manus, Director of the Goethe-Institut Irland.

On Sunday afternoon, I have been invited to speak in Bunnacurry School on ‘The poet as theologian, the theologian as poet’, exploring a theologian’s engagement with John F Deane. This will be followed by poetry readings by Maurice Harmon, Harry Clifton, Gerard Smyth, James Harpur, Padraig J Daly and Jacques Rancourt.

The weekend finishes on Monday [6 May] with a guided walk at the Bunnacurry Monastery site, and poetry readings on site by Jacques Rancourt, John F Deane, Fiona Sampson, Jan Wagner and Paddy Bushe. 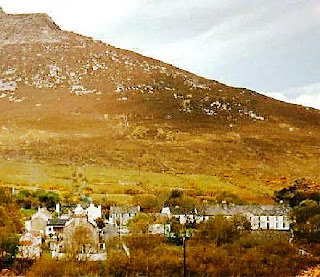 I am staying for the weekend in Gray’s Guest House, Dugort, opposite Saint Thomas’s Church and an ideal venue for lengthy walks on the beach at Dugort. Gray’s is the oldest and, perhaps, best-known guesthouse on the island. For 100 years, Gray’s has been part of the story of Dugort. It is known too for its peaceful atmosphere, its quiet setting and its hospitality. It has been bringing guests – including artists and writers – back to Achill, time and again.

The guesthouse incorporates three connected houses built in the square that was part of the Revd Edward Nangle’s original missionary settlement in Dugort in the 1830s. Each area has its own unique appeal – a large, traditionally furnished sitting room with an open fire, a comfortable lounge, and several quiet conservatories, all offering old-fashioned comfort, and dinner is served in a large dining room.

For many years, Mrs Violet McDowell, who died four years ago [24 August 2009] in her one hundredth year. “Auntie Vi,” as she was known to generations, was one of Achill’s greatest ambassadors and at the time her death was described as “an end of an era.”

She was almost single-handedly responsible for the restoration of a number of buildings in Dugort and for the upkeep of Saint Thomas’s Church (right).

Vi was born in Dugort in February 1910, the daughter of William Robert Gray and Rebecca (McNally) Gray. Her father, William Robert Gray, was an engineer who worked with TE Lawrence, ‘Lawrence of Arabia’ and, she was the last in the line of the Gray family in Achill who arrived in Dugort in the mid-19th century to build Saint Thomas’s Church for the Revd Edward Nangle.

Of course, the Achill Mission was responsible for introducing tourism to the island. Vi retired to Achill with her late husband, Arthur McDowell, former Ulster Bank manager in Tuam and Ballina, and from 1970 she ran Gray’s Guest House, which had been in her family since the mid-1880s. I visited Vi in Gray’s shortly before she died. Her funeral took place in Saint Thomas’s Church – where she was baptised and married – and she was buried in the churchyard.

Her brother, the Revd Bertie Gray, was a vicar in Cornwall. Another brother, the late Cyril Gray, taught art in Newtown School, Waterford, for many years, and is remembered in the name of the Cyril Gray Memorial Hall, where the weekend’s proceedings begin this evening.