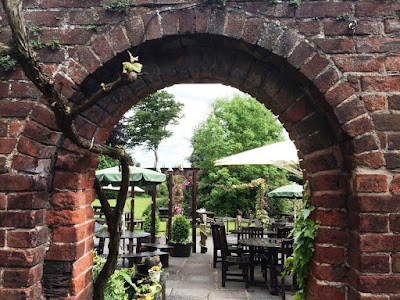 ‘Footfalls echo in the memory / Down the passage which we did not take / Towards the door we never opened / Into the rose-garden …’ (TS Eliot, ‘Burnt Norton’) … looking into the garden at the Hedgehog in Lichfield last weekend (Photograph: Patrick Comerford, 2015)

During the week, I have been working on my sermons for Sunday next, the First Sunday after Trinity [7 June 2015], when I am presiding at the Parish Eucharist in both Saint Werburgh’s Church, Saint Werburgh Street, and All Saints’ Church, Grangegorman, Dublin.

As I wrestled with these themes, I was reminded of the words TS Eliot puts in the mouth of Thomas Becket in his play Murder in the Cathedral. Becket responds to all four tempters and responds the immoral suggestions of the fourth tempter in particular:

This year marks the fiftieth anniversary of the death of TS Eliot on 4 January 1965. Eliot is, perhaps, the greatest poet in the English language in the 20th century, and he is one of the greatest Anglican literary figures.

The producer of that first production of Murder in the Cathedral, E Martin Browne (1900-1980), asked Eliot remove some of the material in the play, declaring it would not work on stage. “Can’t get them over on the stage,” he said, according to Eliot’s later recollection.

However, took this work, and rather than losing it, transformed it into his poem Burnt Norton (1935), the first of his Four Quartets, which was also written 80 years ago, although it was not published until 1936.

The four poems, for which Eliot received the Nobel Prize for Literature, are concerned with the conflict between individual mortality and the endless span of human existence.

In Burnt Norton, Eliot tells us that the past and the future are always contained in the present. Past, present, and future cannot be separated with any precision:

Time present and time past
Are both perhaps present in time future
And time future contained in time past.

Eliot and Browne had been working together for a number of years. When Browne returned to England from the US in 1930, George Bell, Bishop of Chichester, appointed him the director of religious drama for the diocese. One of Browne’s early tasks was to organise a pageant, The Rock, to raise funds for building Anglican churches. At Bell’s request, Eliot wrote a series of choruses linking the loosely historical scenes of the pageant, which was performed at Sadler’s Wells in 1934.

Burnt Norton was Eliot’s only major poem to be completed during a six-year period when he concentrated on writing plays and essays. It was republished as an independent work in 1941, the same year that saw the publication of East Coker and The Dry Salvages, the second and third poems in the Four Quartets. Little Gidding followed in 1942.

Burnet Norton has been described as a poem of early summer, air, and grace. It begins with a narrator recalling a moment in a garden. The scene provokes a discussion on time and how the present, not the future or the past, really matters to individuals. Memories connect the individual to the past, but the past cannot change.

Time present and time past
Are both perhaps present in time future
And time future contained in time past
If all time is eternally present
All time is unredeemable.
What might have been is an abstraction
Remaining a perpetual possibility
Only in a world of speculation.
What might have been and what has been
Point to one end, which is always present.
Footfalls echo in the memory
Down the passage which we did not take
Towards the door we never opened
Into the rose-garden. My words echo
Thus, in your mind.

As I walked through the countryside north of Lichfield in the sunshine last Saturday, and then strolled through the gardens of the Hedgehog on Stafford Road, thinking of next Sunday’s readings and gathering thoughts for my sermons, those words of Eliot written 80 years ago came to mind:

And I relaxed in the joys of the present moment, enjoying being in God’s creation and the summer sunshine, with memories of over 40 happy years going to and from Lichfield, and looking forward to whatever the future may hold. 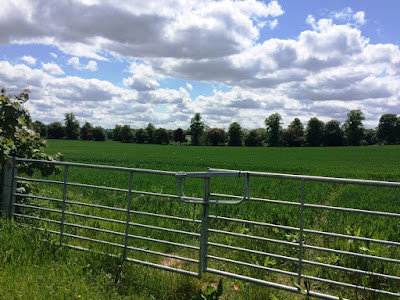