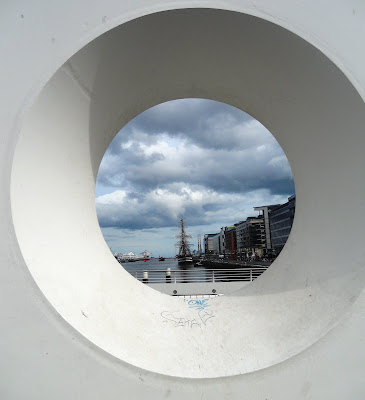 There were few tall ships to see in Dublin port (Photograph: Patrick Comerford, 2012)

It was good to be back in Dublin for a day or two at the weekend.

After Choral Eucharist in Christ Church Cathedral, sung by the Past Choristers, five of us went for lunch in the Italian Quarter, where it was good to catch up on the news from the past two weeks.

Later, two of us strolled on down the banks of the River Liffey to see the last day of the Tall Ships in Dublin.

However, only there were two ships to see, and the rest were out to sea.

Instead, the quays were crowded with stalls and with people.

We left early, only to hear afterwards that everything was shut down by the Garda (the Police) because of the danger of overcrowding. 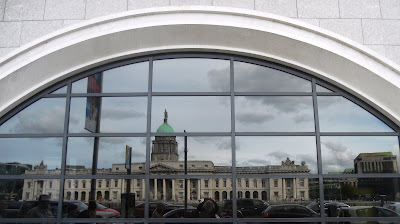 The old and the new ... there Custom House reflected in the windows of the Ulster Bank on the quays (Photograph: Patrick Comerford, 2012)

As we strolled back west along the south side of the river there were interesting reflections in the windows. But this was the last weekend this summer and I’m sure for many the overcast weather was as disappointing as the absence of tall ships to see.

Perhaps the coming week holds a promise of better weather and more sunshine. But autumn is around the corner.

Posted by Patrick Comerford at 23:00 No comments: