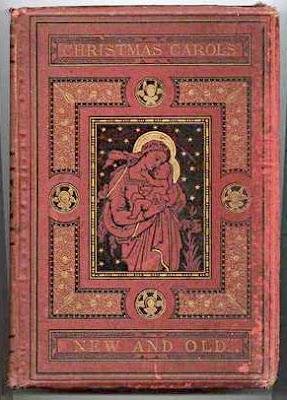 My choice of Christmas poem this morning is ‘A Christmas Carol,’ by the English poet and philosopher Samuel Taylor Coleridge (1772-1834). This poem is sometimes known also by its opening line, ‘The shepherds went their hasty way.’ The poem was written in 1799, but it may have been largely forgotten but for its inclusion in a collection of carols in 1871 that revived carol singing in Victorian England.

I suppose most of us when we were at school read some of Coleridge’s better-known poems, including ‘The Rime of the Ancient Mariner’ and ‘Kubla Khan.’ Although his work as a philosopher and a literary critic is forgotten by many, we still use many of the concepts he coined, such as “suspension of disbelief,” and we still quote many of the phrases. Even those who have never read ‘The Rime of the Ancient Mariner’ are familiar with images in it, including the metaphor of an albatross around one’s neck, the words “water, water everywhere, nor any drop to drink” (usually misquoted as “but not a drop to drink”), and the phrase “a sadder and a wiser man” (usually misquoted as “a sadder but wiser man”).

I had forgotten Coleridge’s contribution to English poetry and his theological influence until recent visits both to both Jesus College, Cambridge, where he was an undergraduate from 1791 to 1794, and Calne in Wiltshire, where he lived with the Morgan family from 1814 to 1816 while he was writing his Biographia Literaria.

Coleridge, who was one of the founders of the Romantic Movement in England, was born in 1772 in Ottery St Mary in Devon, the youngest of 14 children of the local vicar, the Revd John Coleridge, who was also headmaster of the local grammar school. Throughout his life, Coleridge would idealise his father, who always wanted him to be a clergyman, as a pious and innocent priest.

After his father died in 1781, Coleridge was sent to school at Christ’s Hospital in London, where he became friends with Charles Lamb. There he also came to love the classics, the Greek poets, Shakespeare and Milton.

Seeking to realise his father’s dream that he too would become a priest, Coleridge entered Jesus College, Cambridge in 1791, where he gained one of the Rustat scholarships for the sons of clergymen, and there he initially focused on preparing for ordination. As an undergraduate, Coleridge won a distinguished medal for an ode on the slave trade. After running away briefly to enlist in the army, he was readmitted to Jesus College, but he never completed his degree and left Cambridge in 1794.

In 1795, the same year he first met William Wordsworth, he married Sarah Fricker in Saint Mary Redcliffe, Bristol. From 1797 to 1798, he lived in a cottage in Nether Stowey, Somerset and during those two fruitful years he wrote ‘The Rime of The Ancient Mariner,’ ‘Kubla Khan,’ the first part of ‘Christabel,’ and his much-praised “conversation” poems, ‘This Lime-Tree Bower My Prison,’ ‘Frost and Midnight,’ and ‘The Nightingale.’

Despite his Anglican upbringing, Coleridge was by then an occasional preacher in Unitarian chapels, although his first sermon in a chapel in Bath is said to have put to flight a very thin congregation. He preached too in Nottingham and Birmingham, and he briefly took over from the Revd Joshua Toulmin at Mary Street Unitarian Chapel in Taunton while Toulmin grieved over the drowning of his daughter Jane. “These events cut cruelly into the hearts of old men,” he wrote, “but the good Dr Toulmin bears it like the true practical Christian, – there is indeed a tear in his eye, but that eye is lifted up to the Heavenly Father.”

Coleridge thought of becoming a Unitarian minister, but Josiah Wedgwood sent him a draft for £100, “to prevent the necessity of his going into the ministry.” After some hesitation, Coleridge returned the £100, and in January 1798 he was invited to become the Unitarian minister in Shrewsbury. Josiah and Thomas Wedgwood then offered him an annuity of £150 from on condition that he devoted himself entirely to philosophy and poetry. He hesitated once again, but eventually accepted their offer and separated from the Unitarians, although letters written in 1802 show that he still held many Unitarian views.

Meanwhile, in 1798, Coleridge and Wordsworth published a joint volume of poetry, Lyrical Ballads, which is the starting point for the English romantic movement. That autumn, they travelled to Germany, where Coleridge was introduced to the writings of Immanuel Kant, Jakob Boehme and Spinoza.

In 1799, Coleridge wrote the poem ‘A Christmas Carol,’ my choice of Christmas poem for this morning. Around 1800, he settled with his family and friends at Keswick in the Lake District, where Wordsworth was already living. In 1802, he wrote to a Unitarian friend: “My creed is very simple – my confession of Faith very brief. I approve altogether & embrace entirely the Religion of the Quakers, but exceedingly dislike the sect … By Quakerism I understand the opinions of George Fox …” By 1803, he was basing his doctrine of God on the work of the Irish theologian John Scotus Erigena.

From 1804, he travelled in Italy, Sicily and Malta, hoping leaving the damp climate of Britain would improve his health and working for a while as a minor government official in Malta. But by then his opium addiction was destroying his life: he separated from his wife Sarah in 1808, quarrelled with Wordsworth in 1810, lost part of his annuity in 1811, and put himself under the care of a Dr Daniel in Bath in 1814. There were failed attempts at publishing newspapers, and he ran up mounting debts, despite an increasing reputation as a literary critic. 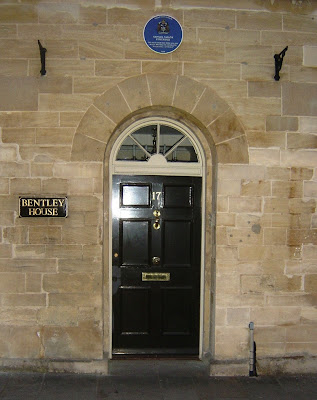 In 1815, he moved from Bristol to stay in Bentley House in Church Street, Calne, with John Morgan, an old friend who offered him “unexampled assiduity and kindness.” The former village of Quemerford, which gives the Comerford family its name, is only a short walk from Church Street in Calne.

For many years, Joseph Priestley lived at No 19, The Green, Calne, and was the Unitarian minister there. Coleridge lived in Calne for a great part of 1815 and 1816, there he completed his Lay Sermons and Biographia Literaria, and attempted to write some plays. When the poet Byron asked him for another tragedy, he dictated ‘Zapolya to Morgan in Calne. Byron recommended Zapolya to John Murray, and he published it as a Christmas Tale in two parts in 1817.

That year, Coleridge also included ‘The Virgin’s Cradle Hymn,’ a translation of a short Latin lullaby, in his Sibylline Leaves. But by then Coleridge was depressed and alienated from his family. He finally moved to Highgate in 1817, and there he lived for the rest of his life. In his final years he closely adhered to the Anglicanism of his birth, and the bright young men from Cambridge and London who later became the leaders of the Broad Church movement, including FD Maurice, John Sterling and Connop Thirlwall, later Bishop of St David’s, came to Highgate to hear him at length. He died there in 1834.

His poems influenced all the major poets of his age, and his influence on Wordsworth is particularly important. Despite his youthful Unitarianism, Coleridge later turned to the writings of the English Reformers and the Caroline Divines, and his reading of Richard Hooker led him to declare “the Trinity is the only Form, in which an Idea of God is Possible – unless indeed it be a Spinozistic or World God.”

TS Eliot, who began life as Unitarian and became an Anglo-Catholic after moving to London, dismisses Coleridge as a mere “researcher into religious emotion.” But Coleridge brought English theology out of the 18th century into the romantic era, according to David Pym, and FD Maurice, James Martineau, Charles Kingsley and many others were indebted to Coleridge’s religious thinking.

‘A Christmas Carol’ was written in 1799. With its stated belief in the virgin birth and salvation, it is difficult to reconcile this poem with Coleridge’s youthful Unitarianism. But its imagery provides, perhaps, a hint of Coleridge’s eventual return to the Anglicanism of his birth.

Later, Coleridge also translated ‘The Virgin’s Cradle Hymn,’ a short lullaby he collected in Germany and published in his Sibylline Leaves in 1817. Coleridge recalled copying the Latin text from a “print of the Blessed Virgin in a Catholic village in Germany.”

The text is from a collection of devotional Flemish engravings by Hieronymus Wierix, and has inspired a number of modern choral and vocal musical settings.

When ‘A Christmas Carol’ was set to music by Sir John Stainer and Canon Henry Ramsden Bramley in their collection Christmas Carols New and Old (London: Novello, Ewer & Co, 1871), they omitted verse 7, and they changed the words “The milk rushed faster to her breast” in verse 3 to: “A mother’s love o’erflowed her breast.”

Stainer is best remembered for his Crucifixion, but this book by Stainer and Bramley was largely responsible for the Victorian revival of the Christmas carol, according to Percy Dearmer. It included Stainer’s arrangements of what have since became the standard versions of ‘What child is this,’ ‘God rest you merry gentlemen,’ ‘Good King Wenceslas,’ ‘The First Nowell’ and ‘I saw three ships,’ as well as Coleridge’s ‘The Virgin’s Cradle Hymn’ and ‘A Christmas Carol.’

I have never heard either Coleridge’s ‘A Christmas Carol,’ or his ‘The Virgin’s Cradle Hymn,’ being sung by carollers or in church. But it is part of an interesting story in English theology and of the interesting story of the revival of carols in England. 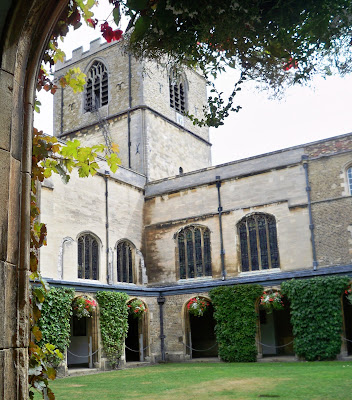 Jesus College, Cambridge, where Coleridge was an undergraduate, although he never received a degree (Photograph: Patrick Comerford)

The shepherds went their hasty way,
And found the lowly stable-shed
Where the Virgin-Mother lay:
And now they checked their eager tread,
For to the Babe, that at her bosom clung,
A Mother’s song the Virgin-Mother sung.

They told her how a glorious light,
Streaming from a heavenly throng.
Around them shone, suspending night!
While sweeter than a mother’s song,
Blest Angels heralded the Saviour’s birth,
Glory to God on high! and Peace on Earth.

She listened to the tale divine,
And closer still the Babe she pressed:
And while she cried, the Babe is mine!
The milk rushed faster to her breast:
Joy rose within her, like a summer’s morn;
Peace, Peace on Earth! the Prince of Peace is born.

Thou Mother of the Prince of Peace,
Poor, simple, and of low estate!
That strife should vanish, battle cease,
O why should this thy soul elate?
Sweet Music’s loudest note, the Poet’s story,
Didst thou ne’er love to hear of fame and glory?

And is not War a youthful king,
A stately Hero clad in mail?
Beneath his footsteps laurels spring;
Him Earth’s majestic monarchs hail
Their friends, their playmate! and his bold bright eye
Compels the maiden’s love-confessing sigh.

Tell this in some more courtly scene,
To maids and youths in robes of state!
I am a woman poor and mean,
And wherefore is my soul elate.
War is a ruffian, all with guilt defiled,
That from the aged father’s tears his child!

A murderous fiend, by fiends adored,
He kills the sire and starves the son;
The husband kills, and from her board
Steals all his widow’s toil had won;
Plunders God’s world of beauty; rends away
All safety from the night, all comfort from the day.

Then wisely is my soul elate,
That strife should vanish, battle cease:
I’m poor and of low estate,
The Mother of the Prince of Peace.
Joy rises in me, like a summer’s morn:
Peace, Peace on Earth! The Prince of Peace is born!

Tomorrow: ‘The Cultivation of Christmas Trees’ by TS Eliot.