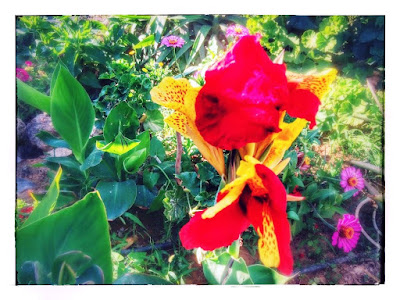 Flowers by the side of the road on the way to the beach in Platanes (Photograph: Patrick Comerford, 2016)

I admit without embarrassment that I grew up without disadvantage. I had all the advantages of growing up in a professional, middle class family in the 1950s and the 1960s, including private schooling, regular summer holidays, access to all the sporting facilities I wanted or needed, and the expectation both at school and in that family that I would end up in one of the solid professions, perhaps even with a place in public and political life.

I never finished my training as a chartered surveyor, and although that’s a story for another time it certainly is not a story about lack of access to the professions or any disadvantage in education.

So I have to be very careful about how I talk about any experiences of disadvantage in my childhood or in my education.

If anything was missing it was because I did not know that it was available at the time, and there was no home encouragement to seize some advantages that were then available.

For example, I grew up without any musical education, never learning to sing, to read music or to play an instrument. It is not that these opportunities were not available to me. It is simply that there was no musical instrument at home – no piano, no violin, no guitar, not even a record player. It is a form of illiteracy.

At my school in Gormanston, I could have joined a choir or learned any musical instrument I wanted to. But I had no idea then of the enjoyment and pleasure these would have given me in later life. Instead, the only music I knew in my teens was the songs in the charts in the 1960s, such as the Beatles and the Rolling Stones.

It was not until I left school that I started to listen to English folk music, including the songs of Steeleye Span, and I was 19 before I was introduced to real music when I was encouraged in Shropshire to listen to Vaughan Williams. After that, I came to appreciate Bach first, and then Beethoven and Mozart.

My musical education since then has all been self-taught, and my favourite instrument is my own ear. It is a privilege as a chapter member to sit the stalls of Christ Church Cathedral, Dublin, so many Sundays, one after another, and to listen to one of the great cathedral choirs. 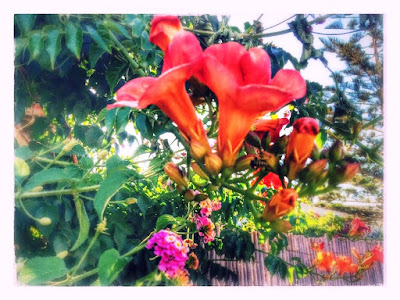 I never learned the names of plants and flowers when I was growing up (Photograph: Patrick Comerford, 2016)

One of the other disadvantages of my childhood, if I may use that description cautiously, was growing up without knowing the names of plants, fruits, flowers, trees and birds. Although a considerable part of childhood was spent on my grandparents’ farm in West Waterford, and all the houses I lived in had rooms lined with bookshelves, I never learned these names, and I cannot remember anyone trying to teach them to me.

I read in foreign languages, I knew the great works of drama, poetry and literature, I was familiar with the great works of art, and had read widely about history, politics and travel. I was a voracious and precocious reader, and I can clearly remember reading newspaper reports about the trail involving Lady Chatterley’s Lover in 1960 when I was eight, and about the trial of Adolf Eichmann around the same time. The first theology I read was the debates in newspapers with the publication of John Robinson’s Honest to God in 1963, when I was 11.

But because I do not know the names of plants, fruits, flowers, trees and birds does not mean that I do not appreciate them. I know there are still people who see art as an investment and who still say things such as ‘I know nothing about art, but I know what I like.’ I may not be able to name what I see, but that does not stop me from appreciating what I see. 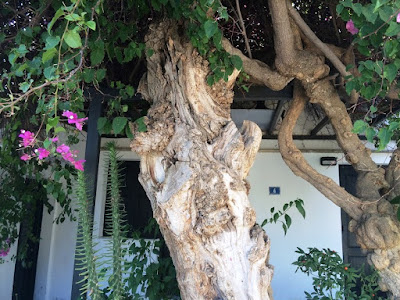 An old tree beside a house on the road to the beach in Platanes (Photograph: Patrick Comerford, 2016)

Of course, knowing the names of plants, fruits, flowers, trees and birds in one language is often without advantage in another country, because those names are often unique to a language and difficult to translate.

It is a short walk of about 300 metres from Julia Apartments in Platanes, where I am staying, to the long, sandy stretch of beach known as Pavlos Beach, which is a continuation of the beach that begins 5 or 6 km further west in Rethymnon. This should be a short, brisk walk each day, but it is much longer each afternoon because I need to stop to admire the plants and flowers and trees growing along the way.

Of course there are lemon trees and olive trees. But I have been coming to this part of Greece for three decades, and still do not know many names apart from hibiscus and bougainvillea. Perhaps it is intellectual laziness on my part; perhaps it is just that I simply enjoy it all, in all its riotous and bright colours. Sometimes we want to name something so that we can own it. I am happy to rejoice in this part of creation without ever needing to own any small part of it. 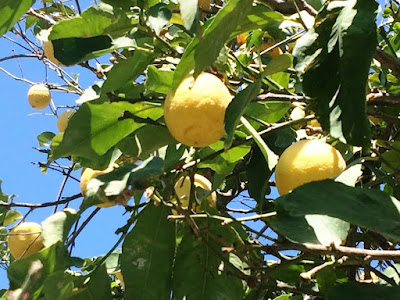 Lemons growing on a tree by the roadside (Photograph: Patrick Comerford, 2016)

Sitting on the terrace outside my rooms in Julia Apartments as I write, I am beside lush and verdant gardens, with a rich variety of plants and trees whose names I do not know.

Our local supermarket, Pavlakis, moved across the street to new premises a few months ago, with wider aisles, air conditioning, and losing the musical chaos of the older premises. But still I enjoy the wide variety of locally produced fruits and vegetables, with the shapes and colours that some British politicians would try to convince you had been eliminated by the EU.

The cherries, the mandarins, the pears, the peaches, the figs … they all have labels underneath giving their names in Greek, and with a little determination I might expand my vocabulary over the next few weeks.

I might even suggest that people could label their trees and plants too. 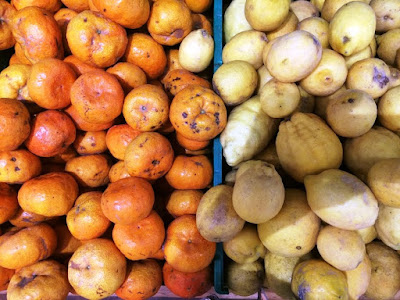 Posted by Patrick Comerford at 07:10 No comments: