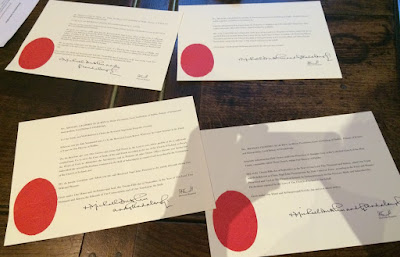 This year’s round of ordinations came to a conclusion yesterday afternoon [25 September 2016] with the ordination of two priests in Christ Church Cathedral, Dublin: the Revd Kevin Conroy for Saint Patrick’s Parish, Dalkey, and the Revd Nigel Pierpoint for Christ Church, Taney, and Saint Nahi’s, Churchtown.

The preacher at yesterday’s ordination was the former President of Ireland, Professor Mary McAleese. She preached a perfect ordination sermon, recalling the pathway these two new priests had taken on their journeys to ordination, encouraging their families and friends to support them, and reminding us all of what is at the heart of ordained priestly ministry.

All the new deacons and priests have been my students, and I have supervised the MTh dissertation of two of these new priests, the Revd Kevin Conroy who was ordained yesterday and the Revd Suzanne Cousins who was ordained in Derry two weeks ago.

Later last night, I joined Kevin, his wife Olive and their family and friends at their celebrations in the Orchard, Stillorgan.

It was a long day: this morning I was subdeacon at the Cathedral Eucharist, at which the Dean’s Vicar, the Revd Abigail Sines, presided, and the Archdeacon of Glendalough, the Ven Ricky Rountree, preached.

Earlier in the weekend, on Saturday afternoon [24 September 2016], I robed and processed with the chapter of Christ Church Cathedral for the installation of the Very Revd William Moreton as the new Dean of Saint Patrick’s Cathedral, Dublin.

His installation as Dean of Saint Patrick’s Cathedral was attended by President Michael D Higgins, the First Minister of Northern Ireland, Arlene Foster, and the Deputy First Minister, Martin McGuinness. The preacher was the former Archdeacon of Derry, Archdeacon Scott Harte.

With the end of this year’s ‘ordination season,’ the new academic year is back in full swing. The new full-time students and the continuing part students were back in last weekend, and the Year III students or deacon-interns were back in all last week, including the two students whose research I am supervising this academic year.

Already there have been faculty meetings and academic committee meetings in both Trinity College Dublin and the Church of Ireland Theological Institute, and meetings with students about new dissertations.

The new priests make their declarations before the Archbishop in the Chapter House, Christ Church Cathedral, Dublin (Photograph: Patrick Comerford, 2016)

We had a reminder at the ordinations yesterday afternoon that this ministry of word and sacrament is directly related to the needs of this suffering world. The Post-Communion hymn, by CW Humphreys and Percy Dearmer, is based on a Syrian text and is a reminder that the Eucharist is connected to the needs for peace and love in this world:

Strengthen for service, Lord, the hands
that holy things have taken;
let ears that now have heard thy songs
to clamour never waken.

Lord, may the tongues which ‘Holy’ sang
keep free from all deceiving;
the eyes which saw thy love be bright,
thy blessèd hope perceiving.

The feet that tread thy holy courts
from light do thou not banish;
the bodies by thy Body fed
with thy new life replenish.