The end of an era at CITI 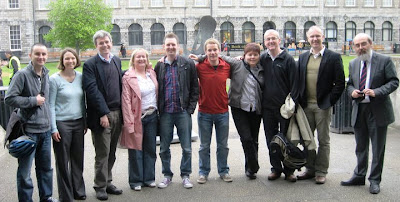 It was the end of an era today.

Students from the Church of Ireland Theological College sat the last-ever exam paper on the Bachelor in Theology (BTh) course.

The eight BTh students, who are in their third year, have been sitting exams each morning in Trinity College Dublin. The final exam this morning was a two-hour paper on Contemporary Ethical Problems.

Apart from this morning’s paper, the other four exams were three-hour papers. All exams were sat in the Arts Block in Trinity College Dublin.

We began the week celebrating the Eucharist in the chapel on Sunday evening, with chapel services each evening throughout the week, including Evening Prayer on Monday, Tuesday and Thursday and the Mid-Week Eucharist on Wednesday. A small group also read the Litany in the chapel on Friday morning.

With two other staff members – the Revd Dr Maurice Elliott, Director of the institute, and Dr Katie Heffelfinger, Lecturer in Biblical Studies and Hermeneutics – we all gathered for group photographs outside the Arts Block in Fellows’ Square before heading off to Porterhouse in Nassau Street to pop a few corks.

We were joined for lunch by the former Principal of the Church of Ireland Theological College, the Revd Canon Professor Adrian Empey, and his wife, June.

Afterwards, the students headed off for some fun on the “Viking Splash” and dinner in the Glenside.

The next stages include waiting for the exam results. But the most important stage now is their ordination to the diaconate in the coming weeks. They have been a great year, and they were the last intake on the BTh course. It has been great working with them for the past three years.
Posted by Patrick Comerford at 19:42 No comments:

‘No morals in the market’ former TD tells ordinands

The Church of Ireland Gazette carries this half-page news report and photograph on page 3 today [30 April 2010]: 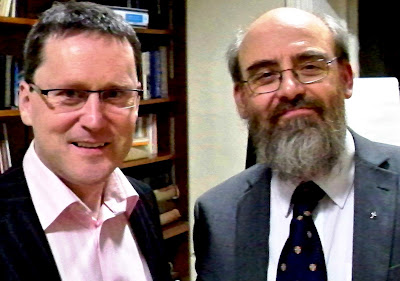 George Lee is pictured following his address to the Marsh Society with Canon Patrick Comerford, who chaired the meeting

‘No morals in the market’ former TD tells ordinands

In a punchy and at times hard-hitting speech, the former Fine Gael TD, George Lee, has challenged the emphasis on the economy as the main focus in the Republic of Ireland's present economic crisis and wondered about the place of values and people. He was addressing a recent meeting of the March Society, a student-led discussion group, in the Church of Ireland Theological Institute (CITI), Dublin.

The former journalist and broadcaster recently resigned as Fine Gael TD for Dublin South in controversial circumstances. At the time of his resignation, Mr Lee expressed his frustration at not having been given more involvement during his time as a Fine Gael TD in helping to shape the party’s economic policies. He told his CITI audience that “when you are pushed you realise what you believe in.”

As Economics Correspondent in RTÉ, where he had worked from 1992 until his election to the Dáil in the Dublin South by-election in May 2009, Mr Lee said he had watched the economic collapse and was “stunned that no-one saw it coming: it was so obvious.”

He continued: “We are the architects of our own economic misfortune … rapid economic growth that depended on the boom in the building industry and property speculation couldn’t go on for ever … it was not sustainable. Everyone was hell-bent on continuing the good times and nobody wanted to know about the consequences.”

He argued that “massive greed has broken the economy” [and there were] “no morals in the market … trust has gone because of greed.”

Mr Lee went on to speak of the social and human consequences of unemployment, and warned of the danger of permanent, long-term damage to young people, including changes in behaviour, the loss of self-esteem and the pain families go through. The permanent consequences included malnutrition, mental stress, lower life expectancy and greater risks.

“I believe this is the big issue,” he told the CITI meeting. While the government and bankers could sort themselves out, he wondered about the future for ordinary people.

“There is a huge price to pay,” the former TD added. he said that trust had broken down and reminded those present that “prosperity is all about trust; trust is the cornerstone of prosperity.”

He believed that politics ought to be about responsibility and not about power, adding that he no longer trusted political parties, the financial regulator, government departments or the Taoiseach, “but I do trust people.”

He said that, in recent years, the Irish economy “was about grab, grab, grab. Now we are grasping for survival … but no-one knows the way out.” He insisted on the need to get back to people, saying that “the economy is about people, not the other way round. We’ve got to put people first.”

Concluding, he explained his decision to resign his seat, saying: “I have no regrets myself about leaving … I believe I did the right thing, I made the right decision.”

A similar report is carried in the May edition of the Church Review (Diocese of Dublin and Glendalough)
Posted by Patrick Comerford at 06:00 No comments: