Eleven pipers piping on the Eleventh Day of Christmas 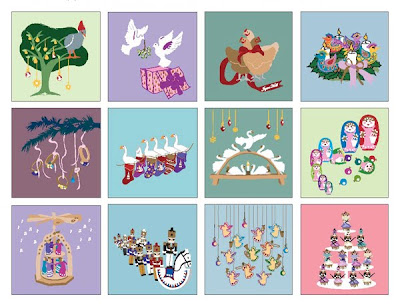 On the Eleventh Day of Christmas ... eleven pipers piping; a pack of Christmas cards designed by the English designer, Julia Crossland

The Eleventh Day of Christmas is 4 January. In North America, many churches recall Elizabeth Ann Seton, the first American-born saint, on this day. She was born in New York City in August 1774 into a devout Episcopalian family. In 1794 she married William Magee Seton, a rich businessman. Elizabeth and her sister-in-law Rebecca Seton went on missions of mercy to help the poor of New York, and became known as the ‘Protestant Sisters of Charity.’

On a visit to Italy, William Seton died and Elizabeth later became a Roman Catholic before returning to the US. Elizabeth and Rebecca later organised the Sisters of Charity of Saint Joseph, who are still active today, teaching children and helping the poor.

The eleventh verse of the traditional song, The Twelve Days of Christmas, is: