A missed opportunity
to visit Warsaw’s only
pre-war synagogue 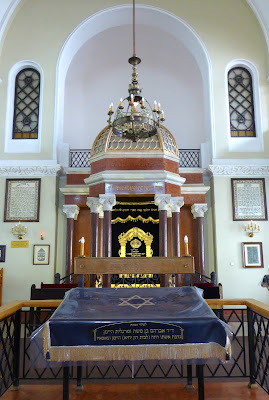 Facing the Ark in the Nożyk Synagogue, the only surviving pre-war synagogue in Warsaw (Photograph: Ethan Doyle White / Wikipedia)

I should be in Warsaw today [26 May 2020] on the first full day or a three or four-day city break. But for the second time in just over two years, I have been forced to abandon plans to visit the Polish capital.

The package to Warsaw, with Ryanair flights and Airbnb accommodation, was a Christmas present, and I was due to fly out yesterday and return on Thursday. But the travel restrictions introduced as a response to the Covid-19 pandemic have cancelled all these arrangements.

I particularly wanted to visit Warsaw this year and to visit the synagogues of Warsaw and the sites of the Warsaw ghetto uprising on the 75th anniversary of the end of the Holocaust and the end of World War II.

So, I am still in Askeaton, Co Limerick, and this evening I am taking part in the fourth webinar in the Sephardi Academia programme organised by the Bevis Marks Synagogue, with Rabbi Shalom Morris in conversation with Eliezer Papo, who is talking about Sephardim and Ottoman Jewry in the modern state and how they helped to create the world we know today.

The Jewish heritage sites in Warsaw include the synagogue sites, cemeteries, mikvah houses and houses of study, memorials and museums. As the only surviving pre-war synagogue in Warsaw, the Nożyk Synagogue is a reminder of how Jewish Warsaw used to be before the Shoah.

Although Jews had been present in the Mazovia region since 11th century, the oldest document confirming their presence in Warsaw dates from 1414.

A law passed in 1775 encouraged Jews to settle throughout the Mazovian Province, but excluded Warsaw. The early communities near Warsaw developed in Praga from 1780, then still outside the official limits of Warsaw proper.

At the end of the 18th century, Jews gained the right to settle in Warsaw and two communities developed, in Warsaw and in Praga, and the Jewish community established self-government under Prussian rule.

Warsaw’s Jewish population reached its height in the 19th century. When Dov Ber Meisels was appointed the Chief Rabbi of Warsaw in 1856, Jews accounted for more than 26% of the city’s population.

At the beginning of World War I, Warsaw had a Jewish population of 337,000 (38%) in 1914. In the inter-war years this was Europe’s largest Jewish community with 400,000 people – the second largest Jewish population after New York. Before World War II, the Jewish community of Warsaw had over 400 houses of prayer, although most were smaller rooms or houses of prayer attached to schools, hospitals or private homes. 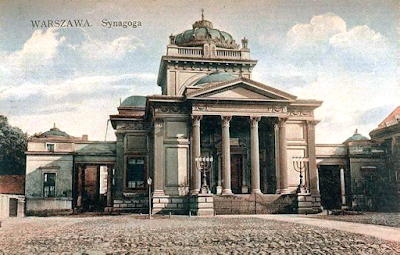 Marconi’s father, Enrico Marconi, was a famous architect who moved to Warsaw in 1822, his mother Małgorzata (Margaret) Heiton was of Scottish descent, while his cousin Leonard Marconi was a sculptor.

Marconi began trained as an architect with his father. They worked together on the Hotel Europejski (1856-1859) and a parish church in Wilanów (1857-1860). His first major project was a villa for the entrepreneur Wilhelm Ellis Rau (1868).

His other works included a villa for his father, dubbed the ‘palace under the artichoke,’ the head office of the Bank Handlowy (1873), a house for Stanisław Zamoyski, a villa for the Sobański family (1877), a renaissance revival palace for Konstanty Zamoyski on Foksal Street, a house for the Branicki family in the Frascati Gardens and numerous palaces and churches outside Warsaw. For many years, he supervised the reconstruction of the Wilanów Palace, the summer residence of the Polish kings. 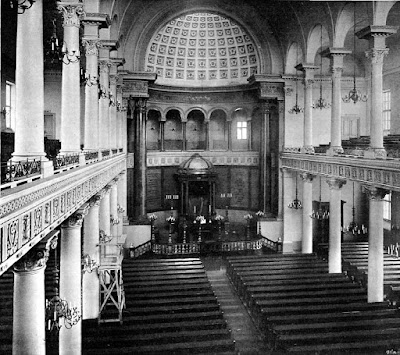 The Great Synagogue, his best-known work, was commissioned in 1877. Some sources also say he also designed the Nożyk Synagogue, although this is not certain. He died on 8 October 1919 in Montreux.

Although the Great Synagogue was not part of any movement for reform, sermons were delivered in Polish and not in Yiddish, there was an all-male choir and an organ, although the organ was only played at weddings, and the liturgy continued in the Orthodox tradition.

The Great Synagogue was blown up by Jürgen Stroop, the SS commander in Poland, on 16 May 1943, in the last act of destruction of the ghetto in Warsaw by the Nazis. It was never rebuilt, and since the 1980s the site has been occupied by a large skyscraper, once known as the Golden Skyscraper and now known as the Blue Skyscraper.

The remains of the Round Synagogue, dating from 1836, were demolished in 1960, and today the Nożyk Synagogue is the only surviving pre-war synagogue in Warsaw. In addition, there is the Progressive Jewish Etz Chaim synagogue on Aleje Jerozolimskie, and the Chabad community and the Reformed community of Beit Warszawa have their own synagogues. 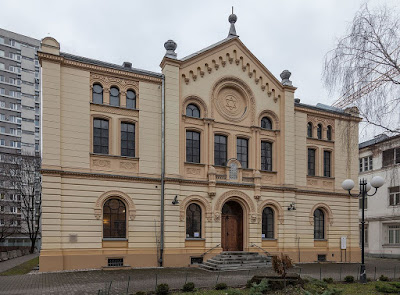 When it was built, the Nożyk Synagogue was surrounded by high-rise tenement buildings. The synagogue was officially opened on this day 118 years ago, 26 May 1902. The founders donated it to the Warsaw Jewish Community in 1914 in return for yearly prayers in their memory. The building was refurbished in 1923 by Maurycy Grodzieński, who also designed a semi-circular choir at the east wall.

The synagogue was damaged during an air raid in September 1939. During World War II, the area was part of the Small Ghetto and shared its fate during the Ghetto Uprising and then the annihilation of the Jewish community of Warsaw by the Nazis. After 1941, the Germans used the building as stables and a depot.

The Etz Chaim Progressive Community Centre was established in 2010 as part of the Jewish Community of Warsaw. The synagogue is in a building on Jerozolimskie Avenue in the heart of Warsaw, opposite the Palace of Culture and Science. Rabbi Stas Wojciechowicz, an Uzbek-born rabbi who came from Israel, has been the rabbi for years.

Beit Warszawa Synagogue, a liberal Jewish synagogue, opened in 1999. It began in 1995 when Severyn Ashkenazy, the Polish-born American hotelier and philanthropist, gathered a group of friends to explore the possibility of creating a reform synagogue.

Cynthia Ann Culpeper (1962-2005) was the first female rabbi to lead religious services in Poland when she conducted High Holy Day services at Beit Warszawa in 2000.

She had converted to Judaism from Roman Catholicism when she was 21, and was ordained by the Jewish Theological Seminary in 1995. She was working as a nurse in San Francisco when she accidentally contracted HIV due to a needle stick, and was diagnosed with HIV in 1995. When she became rabbi of Agudath Israel in Montgomery, Alabama, she was the first full-time female rabbi and the first Conservative female rabbi in Alabama.

She was the first pulpit rabbi to announce being diagnosed with AIDS. When she announced her diagnosis in 1996, her congregation rallied around her, insisting she continue to work, and wearing red AIDS awareness ribbons. She moved to Birmingham, Alabama, in 1997 where she could get ‘cutting edge’ treatment. Culpeper spoke about AIDS to Jewish communities throughout America, but she did not want to be known as ‘the AIDS rabbi.’ She died of AIDS on 29 August 2005.

Meanwhile, the Beit Warszawa congregation moved into dedicated premises in Warsaw in 2003.

Today, the Jewish community is served by four rabbis, and Dr Michael Schudrich has been the Chief Rabbi of Poland since 2004. 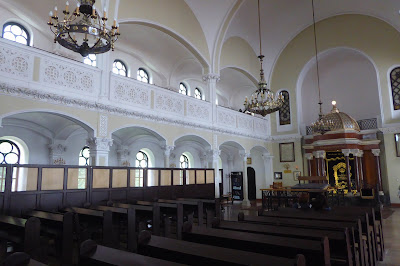 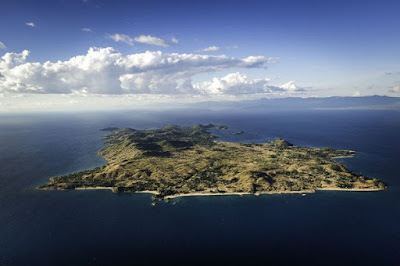 ‘Pray for the residents of Likoma Island in Malawi, especially for those left homeless as a result of the heavy March rainfall’ … USPG’s link with Likoma Island in Lake Malawi dates back to 1885

Pray for the residents of Likoma Island in Malawi, especially for those left homeless as a result of the heavy March rainfall.