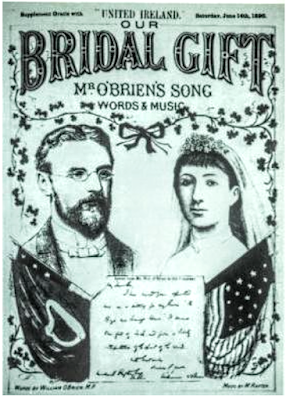 One of the best known Jewish women in Irish social and political life was Ellen Odette Cuffe (1857-1933), Countess of Desart, wife of William Ulick O’Connor Cuffe, 4th Earl of Desart. She was one of the four women appointed to the first Senate in the Irish Free State, and the first Jew to serve as a Senator in Ireland.

Lady Desart has been described as ‘the most important Jewish woman in Irish history.’ But as I walked around Mallow, Co Cork, after dinner yesterday, I was reminded of another Jewish women who played a prominent role in Irish political and social life at the turn of the 19th and 20th centuries.

Sophie Raffalovich O’Brien (1860-1960), was a writer and Irish nationalist, and although she converted to Christianity shortly before her wedding in 1890, she continued to insist on her Jewish identity.

The Raffalovich family was Jewish with rabbinical ancestry, and took their family name from a Polish-born ancestor, Raphael Parnes, who died in 1782. When Sophie was four, the family moved in 1864 to France in 1864 to escape to pressure to convert to Christianity. Her father would have to travel back to Odessa for business and spent half of each year there.

Marie was a political republican, interested in the arts and sciences, and held popular salons in France. She had a platonic relationship with the physiologist Claude Bernard (1813-1878).

Sophie was aware as she grew up of her advantages and studied political economy. She translated works on the lives of Cobden and Lord Shaftesbury, who strongly influenced her social values. Her brother André held literary salons in London where she would act as hostess and met Lady Gregory. 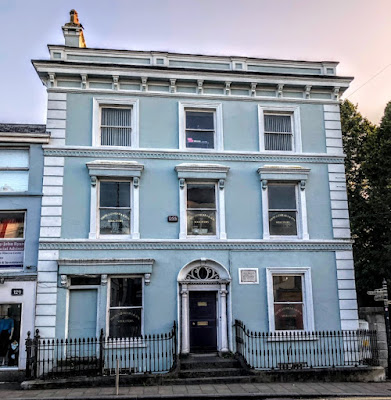 William O’Brien was born in Bank Place in Mallow in 1890 (Photograph: Patrick Comerford, 2020)

Stories and details about William O’Brien’s highly publicised arrests lead both mother and daughter to become interested in Ireland and they corresponded with ‘l'Aiglon’, as O’Brien was known in France. Sophie and William first met him in Paris on 8 June 1889, and they became engaged after a brief courtship, in which she took the initiative.

To her father’s dismay, Sophie converted to Catholicism before her marriage. Several members of Sophie’s mother’s family had already done the same, and both her brothers eventually did so too.

Her father was disappointed, but she later said she had been seeking religious certainty for some time. Although she gave up the Judaism of her childhood, she never abandoned her Jewish identity, and suffered attacks from French and Irish anti-Semites.

Sophie and William O’Brien were married on 11 June 1890, and the guests at their wedding included Charles Stewart Parnell. It turned out to be one of the last major gatherings of the Irish Party before it split later in the year. 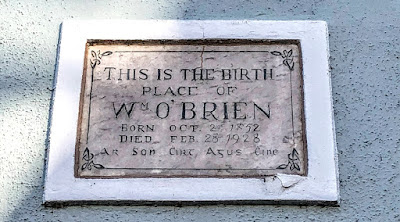 A plaque on the house in Bank Place, Mallow, where William O’Brien was born in 1890 (Photograph: Patrick Comerford, 2020)

Sophie moved to Ireland with her husband after the wedding and was accepted quickly into the social groups. She was particularly close to Anne Deane, niece of John Blake Dillon, and Henrietta Mitchel Martin, John Mitchell’s sister.

William depended heavily on Sophie for his funding, as his secretary and as his nurse during those times in his career when his health was poor. She was the financial accountant and they lived as simply as possible so they could give as much to the poor as possible.

O’Brien refused to pay off debts incurred during the ‘Plan of Campaign,’ choosing instead to go bankrupt in 1895. The couple retired to Mallow Cottage in Westport, Co Mayo, where they worked together on farming, dog breeding and writing. They supported local fisheries, and Sophie wrote a number of novels.

While they were living in Westport, they become active in local famine relief work in 1897-1898. Sophie joined some local nuns in setting up a number of local craft industries and used her contacts to see that locally-made lace could reach the markets in Paris. Sophie describes their life at this time in Under Croagh Patrick (1904).

Sophie also worked with Sister Mary Eustace Eaton at the Harold’s Cross Hospice for the Dying and wrote a biography of her in 1923.

William and Sophie had no children, and when William was unwilling to consider adopting children, Sophie decided to support girls who still lived with their families but lacked other advantages.

William was clear that land redistribution was the way to bring justice to the situation and Sophie became the primary backer of the United Irish League. This that lead to the initial reunion of the Irish Parliamentary Party in 1900, although William left again three years later.

When O’Brien broke with the Irish Parliamentary Party in 1903 over the issue of land purchase, Jasper Tully (1859-1938), MP for South Leitrim, put forward a conspiracy theory in which he claimed O’Brien was the pawn of Jewish financiers who wished landlords to get good prices for their estates so that they could redeem their debts. O'Brien was heckled at public meetings with cries of ‘Down with the Russian Jewess and her moneybags.’

Sophie continued to fund William’s political activities despite the heavy financial expenses that came when he founded a daily newspaper, the Cork Free Press. In 1907 she published a novel, Rosette: a romance of Paris and Dublin. 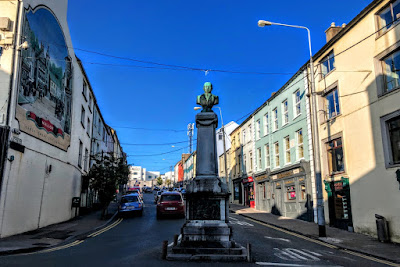 William O’Brien is honoured in the name of O’Brien Street in Mallow (Photograph: Patrick Comerford, 2020)

When they moved to Bellevue House, Mallow, Co Cork, in 1912, Sophie took on local charity work again and wrote extensively on both religious and political topics for the newspapers, including a women’s column on women’s education and women’s involvement in local government for the Cork Free Press.

Despite her work on women’s rights, Sophie was not a suffragist and did not accept a woman’s right to vote. Although her husband was in favour of women’s votes and she appeared with him when he spoke, she never supported it and refused to allow her name to be added to the electoral register when women won the right to vote. Her Unseen friends (1912) is a collection of essays on women she admired.

Sophie’s mother continued to live in France and Sophie felt very connected to the country where she had grown up. The couple supported the allied cause and Sophie had no sympathy for Sinn Féin when it appeared to endanger the allied war effort in World War I.

The war wiped out what wealth Sophie had through the loss of the Raffalovich family investments in Russia and Germany. Her finances had supported her husband’s political career and that career came to an end with the 1918 election.

William’s career ended at the 1918 election and they retired to Mallow, spending time writing and on country walks. She published two books of sketches, describing her poorer neighbours at this time, In Mallow (1920) and Around Broom Lane (1931).

After William died in 1928, Sophie spent some years working through his remaining papers and documents. She worked with his biographer, Michael MacDonagh and published some of his work. She donated his papers to both University College Cork and the National Library of Ireland. Sophie was made a Doctor of Letters (Litt.D.) by the National University of Ireland in 1938.

She moved back to France in 1938 to live near Amiens with Fernande and Lucie Guilmart, sisters who had been pupils in the orphanage and school she had supported since the 1880s. She and the sisters become friends when they visited her in Ireland in the early 1930s, and they now took care of her. Sophie called them ‘the best daughters a childless old woman could have.’

A year after Sophie moved to France, World War II began and German invaded France. The sisters ensured her escape with them to a region near the Pyrenees. While Sophie was living in semi-hiding under the Vichy regime and in Nazi-occupied France, she refused to change her name or to disavow her Jewish identity. Two members of the Raffalovich family – a nephew and a cousin – died in Nazi concentration camps.

Eamonn de Valera prevented a public collection of funds in Ireland to help the three women who had been reduced to near destitution. He claimed the Irish government would provide for her, but all he sent was a single amount of £150 through the Irish consulate to Vichy. However, Paul O’Dwyer raised a collection for her through the Irish community in New York.

By the end of the war, Sophie was extremely impoverished. She continued to live with the Guilmart sisters at Neuilly-St Front, near Soissons. Lucie died in 1957; Fernande outlived her; Sophie died at Neuilly on 8 January 1960, a week before her 100th birthday. 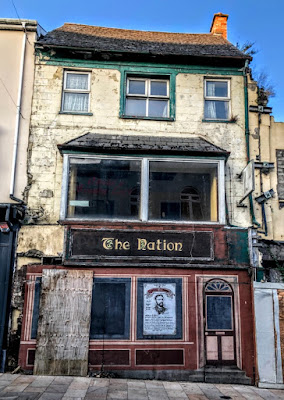 William O’Brien remembered on the façade of an empty shop in Mallow (Photograph: Patrick Comerford, 2020) 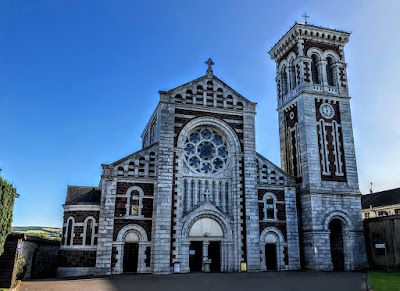 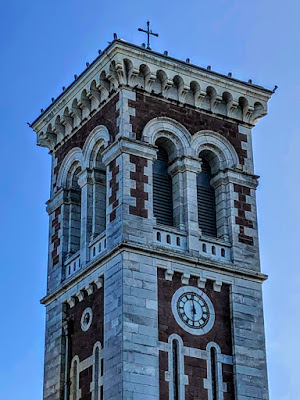 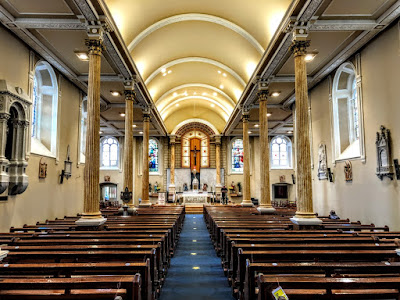 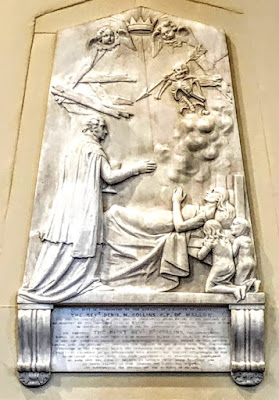 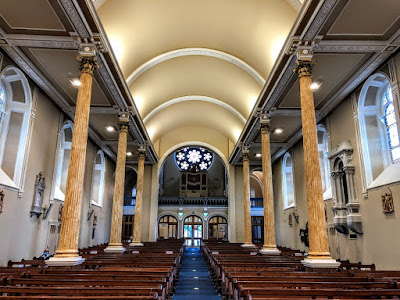