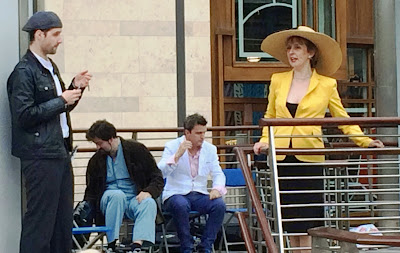 It was quite by accident that I came across today’s “Opera by the Mill Pond” at Dundrum Town Centre this evening [27 June 2014].

At the end of a busy working day, it was surprising how many shoppers, commuters and workers took an air to sit out in the open and enjoy the abridge presentation of Donizetti’s L’Elisir d’Amore (The Elixir of Love).

This is a melodramma giocoso in two acts by the Italian composer Gaetano Donizetti (1797-1848), with an Italian libretto by Felice Romani. It had its premiere in Milan in 1832, and has since become one of the most frequently performed of Donizetti’s operas. It is best known for the plaintive aria Una furtiva lagrima (A furtive tear) – sung by Nemorino in Act II, Scene 2 – one of the most famous and often-recited arias in all of opera.

The main characters in L’elisir d’amore are: Adina, a beautiful, a young, rich land-owning woman (soprano, Sandra Oman); Nemorino, a poor peasant farmer who falls in love with Adina (tenor, whose name was not on the programme); Sergeant Belcore, an over-confident and brash soldier (baritone, Simon Morgan); Dr Dulcamara, a travelling quack (basso buffo, Stephen Fennelly); and Giannetta, a village girl (soprano) – although Giannetta was absent from this evening’s performance.

David Wray was the musical director, and Eoin Cannon was in charge of stage direction.

This comic opera, which is part of the programme for this year’s Dundrum Arts and Cultural Festival, which ends on Sunday [29 June 2014].

The two-act opera is set in a small Italian village in the early 19th century, and opens with Nemorino and the other farm workers listening to Adina telling the story of Tristan and Isolde, and their love potion. Nemorino knows that it is impossible to be in love with such a beautiful and smart woman. The self-important Sergeant Belcore arrives with his regiment and is smitten by Adina’s beauty. He gives her a flower and proposes to her in front of everyone, asking her to marry him at once.

The travelling quack salesman, Dr Dulcamara, who claims encyclopaedic knowledge, arrives in the town, peddling his bottles of potions. Nemorino remembers the story of Tristan and Isolde, and innocently asks Dulcamara if he has anything like Iseult’s love potion. Dulcamara claims he has the Elixir of Love – the potion that gives this opera its name. He says it will work within 24 hours, and sells Nemorino a bottle at a price matching all that Nemorino has in his pockets. Unknown to Nemorino, the bottle only contains cheap wine. Nemorino drinks the bottle and in his drunken state grows in confidence.

Emboldened by the “elixir,” he meets Adina. She teases him mercilessly, but not so much that in the audience we cannot catch a hint that the attraction might be mutual, despite her plans to marry the pompous sergeant in six days’ time. Nemorino still believes that he can win Adina’s love tomorrow because of the elixir, and so acts indifferently towards her.

An upset Adina is upset not only tries to hide her feelings, but ups the stakes by agreeing to marry Belcore immediately after the sergeant receives orders to join his regiment the next morning. However, Adina and Belcore notice Nemorino’s reaction to this news – the Sergeant resents this reaction, while Adina is filled with despair. Nemorino panics and cries out for Dr Dulcamara to come to his aid.

Act 2 opens with Adina’s wedding reception in full swing outdoors. Dr Dulcamara sings a song with Adina to entertain the guests. When the notary arrives to officiate, Adina is sad that Nemorino has not turned up. As everyone goes in to sign the wedding contract, Dulcamara stays outside, helping himself to food and drink.

When Nemorino arrives and sees the notary, he believes he has lost Adina. Frantically, he begs Dulcamara for more of his elixir, but this time wants a potion that works immediately. However, the desperate Nemorino is penniless and the doctor refuses, making his way inside. Belcore emerges on his own, wondering aloud why Adina has suddenly put off the signing their wedding contract. He asks Nemorino why he is feeling down. Nemorino says he has no money, and Belcore suggests that if he joins the army he can pay him immediately.

When Nemorino signs up, he gets cash on the spot from Belcore. Nemorino now thinks he can buy more of the elixir of love from Dulcamara, while Belcore thinks he is about to send his rival off to war. After drinking the second bottle of wine, the village girls begin to swarm around him. They have heard the news – which Nemorino has not yet heard – that his rich uncle has died, leaving him with a large inheritance.

Poor Nemorino is the worse for the weather having spent the cash he received from Belcore on more wine, deluded into believing that it is the “Elixir of Love.” In his drunken state, he thinks he is the object of the affections of the village women, not because of his inheritance but because of this second bottle of elixir.

When Adina sees Nemorino in such a jolly mood, she asks Dulcamara what has happened. The quack-doctor is not aware that Nemorino has fallen in love with Adina, and so he tells her the story of how the poor man is smitten, has spent his last penny on the elixir, and has signed his life away, joining the army to get more money, so desperate is he to win the love of some unnamed cruel woman.

At last, Nemorino’s sincerity dawns on Adina and regrets teasing him. She realises she has fallen in love with him, and is taken by the sincerity of his love. For his part, Dulcamara thinks her behaviour is some sort of condition that needs to be cured with one of his potions.

Nemorino appears alone and recalls a solitary a tear he saw in Adina’s eye when he was ignoring her earlier – the tear that gives the title to the plaintive aria he now sings, Una furtiva lagrima (A furtive tear). This received the greatest applause from this evening’s open-air audience in Dundrum – and, of course, he is now convinced that Adina loves him.

Adina returns and asks why he has signed up for the army and is leaving. Nemorino tells her he wants a better life. Adina tells him he is loved, and that she has bought out his military contract. She offers him the redeemed contract, telling him he is free and that if he stays in town he will no longer be sad.

Nemorino takes the contract but as Adina turns to leave Nemorino thinks she is abandoning him and says that if he is not loved, if the elixir has not worked, if the doctor has fooled him, he might as well go anyway and die a soldier. Adina stops him and confesses that she loves him. Nemorino is ecstatic. When Adina begs him to forgive her for teasing him, they kiss and embrace.

Belcore returns to find the two in an embrace. Adina explains her love for Nemorino to a disdainful sergeant, who tells her there are plenty of other women in the world. Seeing his opportunity, Dr Dulcamara offers to provide the elixir for the sergeant’s next conquest. Everyone agrees the elixir has worked and they bid a fond farewell to the doctor. 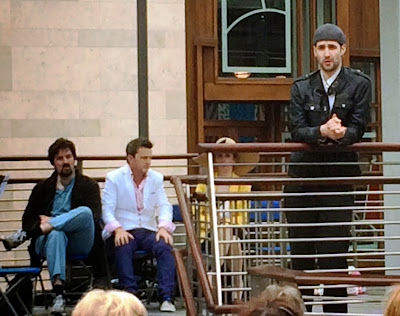 Alongside Bellini and Rossini, Donizetti (1797-1848) is one of the leading composers of bel canto opera. His most famous opera is Lucia di Lammermoor (1835), yet his most immediately recognisable work is this evening’s aria Una furtiva lagrima from L’elisir d’amore (1832).

Seven years ago in 2007, while staying near Venice, I visited his grave in the Basilica of Santa Maria Maggiore in Bergamo, and I was moved by the sad life this composer lived, despite the great love stories in his operas.

When L’elisir d’amore was first staged in 1832, it was deemed one of the masterpieces of the comic opera. After the success of Lucrezia Borgia (1833) boosted his reputation, Donizetti followed both Rossini and Bellini to Paris. But he soon returned to Naples to produce his masterpiece, Lucia di Lammermoor, based on Sir Walter Scott’s novel, The Bride of Lammermoor. This became his most famous opera, and one of the high points of the bel canto tradition, alongside Bellini’s Norma.

In 1838, Donizetti returned to Paris after the Italian censor objected to the production of Poliuto on the grounds that such a sacred subject was inappropriate for the stage. In Paris, he wrote La fille du regiment, which became another success.

More fame came with Don Pasquale in 1843. But by then Donizetti was showing signs of syphilis and what we now know as bipolar disorder. After being institutionalised in 1845, he was sent to Paris, where he was taken care of by his friends, including Verdi. But, after several years of insanity, his friends eventually sent him home to Bergamo, where he died in 1848.

To add to this tragic tale, Donizetti and his wife Virginia Vasselli had three children, but none of them survived and she died tragically from cholera. Donizetti’s body was later moved to the Basilica of Santa Maria Maggiore in Bergamo, where he was buried close to his former teacher, Father Johann Simon Mayr. 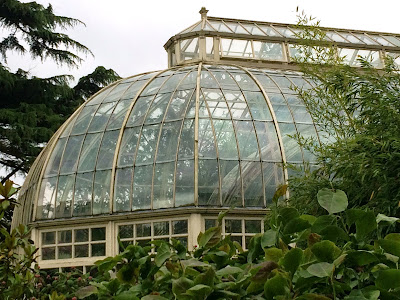 Earlier in the afternoon, two of us visited Farmleigh, the state guest house beside the Phoenix Park, just in time for the last guided tour of the former palatial residence of the Earls of Iveagh and their branch of the Guinness family.

The house retains much of its original interior decoration including portraits by Sir William Orpen and Sir Joshua Reynolds, and stucco ceilings decorated by the Stapleton brothers.

As part of the guided tour of the house we also saw the current exhibition, Seán O’Casey: A Rebel Playwright with a Cause, exploring the themes of rebellion and conflict that permeate Seán O’Casey’s life and work, from his involvement in the 1913 Lockout and Strike, the Dublin Trilogy, his politically-charged masterpiece, his conflicts with the Abbey Theatre, and controversies involving the Roman Catholic Church.

The exhibits are drawn from the Benjamin Iveagh Library at Farmleigh and include O’Casey’s printed works and correspondence from the papers of the former the Abbey Theatre director, Lennox Robinson. 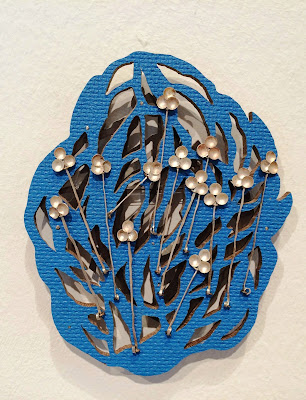 Estonian jewellery from the exhibition ‘Rethinking The Everyday’ in Farmleigh Gallery ... the exhibition continues until 20 July (Photograph: Patrick Comerford, 2014)

Before the guided tour of the house, we paid a brief visit to ‘Rethinking The Everyday,’ an exhibition of Estonian contemporary jewellery and textiles in Farmleigh Gallery.

Later we had coffee (two double espressos) in the Boathouse, a delightful and welcoming café by the lake in the grounds of Farmleigh. I had promised myself a return after my first visit after last Christmas.

Although the coffee machines had been washed and the place was about to close for the day, they welcomed us in, and still made fresh coffee for us.

As they continued to clean up inside and unobtrusively, we sat on the deck outside, where we were joined by a friendly swan and a half dozen hungry ducks.

As we drove back through the Phoenix Park, a young deer jumped across our path. Our hearts were beating even before Donizetti invited us to taste the ‘Elixir of Love’ in Dundrum. 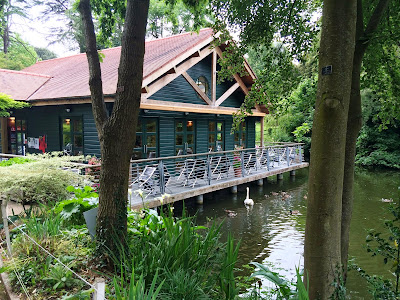 The Boathouse is a friendly and welcoming café beside the lake in the grounds of Farmeligh (Photograph: Patrick Comerford, 2014)

Posted by Patrick Comerford at 22:49 No comments: