A photograph from Lichfield
on BBC Midlands this week 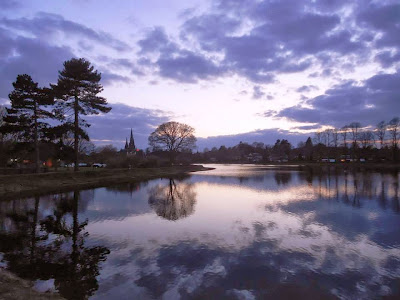 Looking across Stowe Pool to Lichfield at the end of the day (Photograph: Patrick Comerford)

To end the working day on a pleasant and happy note, this photograph was used on BBC Midlands News at 6.30 p.m. on Monday (24 March 2014) with my name as a caption, as part of a collection of “Your Favourite Places,” photographs submitted by viewers from across the Midlands.

This is one of my favourite photographs. Thanks to Paul Oakley, the Editor of the Lichfield Gazette for letting me know this afternoon about its appearance on BBC.

Three other photographs from Lichfield, by Tracey Marsh, Jenny Judson and Nathaniel Prendergast, were also used on Monday evening.

As the crisis over Crimea continues, with tensions escalating between the West and Russia, it is worth reminding ourselves that today marks the 160th anniversary of Britain’s declaration of war on Russia on 27 March 1854, marking the beginning of the Crimean War.

With this in mind, I have chosen as my work of Art for Lent this morning [27 March 2014] ‘Christ in the Desert,’ also known as ‘Christ in the Wilderness’ (Russian: Христос в пустыне) by the Russian artist Ivan Nikolaevich Kramskoi (1837-1887).

Kramskoi completed this painting in 1872. It is in oil on canvas, measures 180 cm × 210 cm, and is in the Tretyakov Gallery in Moscow.

Kramskoi was a painter and art critic, and an intellectual leader of the Russian democratic art movement from 1860-1880. He was born on 8 June (Old Style 27 May) 1837 in Ostrogozhsk into a poor petit-bourgeois family.

He studied at the Saint Petersburg Academy of Arts from 1857 to 1863. There he reacted against academic art and was an initiator of the “revolt of fourteen” which ended with the expulsion a group of its graduates from the academy. They then organised the Artel of Artists.

Kramskoi was strongly influenced by the ideas of the Russian revolutionary democrats and was one of the main founders and ideologists of the Company of Itinerant Art Exhibitions.

Kramskoi's democratic ideals found their brightest expression in his portraits of peasants, with a wealth of character details in representatives of the common people. His paintings show complex and sincere emotions and personalities.

His best-known painting is probably this morning’s work, ‘Christ in the Desert.’ His other paintings with Gospel subjects depicting Christ are ‘Rejoice,’ ‘King of the Jews’ and ‘Herodias.’

In this morning’s painting, Kramskoi continues Alexander Ivanov’s humanistic tradition by treating a religious subject in moral–philosophical terms. His image of Christ is imbued with dramatic experiences in a deeply psychological and vital interpretation, evoking the idea of his heroic self-sacrifice.

This painting led to Kramskoi being offered a professorship by the Russian Academy of Arts Council in 1873, despite his earlier expulsion. However, he rejected honour, choosing instead to keep his “youthful commitment to independence from the Academy.”

Later, this became one of the favourite paintings of Pavel Tretyakov, who bought it for his gallery for 6,000 Roubles. He wrote: “I liked Kramskoi’s Saviour very much ... that’s why I was harrying up to purchase him, but many people did not appreciate him much and the others did not at all. In my opinion this is the best painting in our school recently; maybe I am mistaken.”

The theme of Christ’s temptation alredy attracted Kramskoi in the early 1860s, when he first sketched his composition. The first version of ‘Christ in the Desert’ is dated 1867, but it was unsuccessful. Kramskoi realised that the choice of vertical format was inappropriate, and so in this later work he opted for the horizontal format and introduced the pallid rocky desert in the background.

The horizon divides the canvas plane almost in half, so that the figure of Christ dominates the space and harmonises with the stern wilderness at the same time.

Kramskoy uses primarily cold colours to reflect the chill dawn in the background. The thoughtful figure of Christ, wearing a dark blue cloak and a red tunic, is shifted slightly to the right of centre.

These robes are the traditional colours used for Christ’s robes in Russian Orthodox icons, representing his divinity and his humanity. The painting emphasizes Christ’s human constituent of hypostatic union and portrays his mental anguish rather than his physical suffering.

Christ sits in agonising doubt, his hands tightly clenched together. As one critic said, the future of the world and of all living beings is concealed in that miserable, small being, in pauper appearance, under the rags, in humble simplicity, inseparable with true majesty and force.

As the painter himself wrote: “There comes a moment in every man’s life when he meditates on whether to turn to the right or to the left, whether to sell God for thirty pieces of silver, or to resist the temptation of evil.”