Trying to protect this blog from
the wrong sort of attention 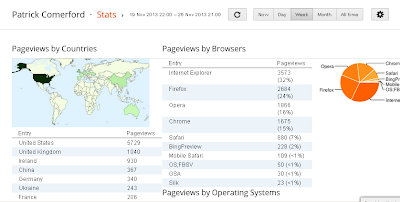 I don’t know the origins of the saying: “Just because you’re paranoid doesn’t mean they’re not all out to get you.” But Henry Kissinger once said: “Even a paranoid can have enemies.”

I suppose it may just help to explain what has been happening to this blog since last Thursday.

Even in my wildest dreams, I cannot imagine this blog becoming a celebrated and celebrity blog. It is of interest to those who want to read my lecture notes, to re-read my sermons or my columns in local diocesan magazines, or to discuss the boring details of the conditions they share with me – Sarcoidosis and severe Vitamin B12 deficiency.

Occasionally a posting sparkles, and then I hear about. For example, a blog posting from Crete on street-corner kiosks, a symbol of modern Greek urban life, was posted on a number of Greek websites, in Athens, Crete and Corfu.

But, for the most part, my blog postings get few online comments, rarely do I attract more than 800 or 900 readers a day, and so I feel I know many of my readers well, and know what you enjoy reading.

I resisted putting a counter on this blog because I wanted to write what was meaningful to me … not to write in order to attract readers in greater numbers. It took a long time to reach the half million mark, and a long time again to notice that I had a million readers.

I am not feigning modesty or humility when I express gratitude.

But during the past week something funny has started to happen.

Why, of all days, would I attract more than double the normal number of visitors to this blog on Thursday last?

Well, as I reviewed the hits and the source of traffic, the only coincidence I could identify was that this also happened to be the day I was the guest speaker at a debate in the ‘Phil’ in Trinity College Dublin, speaking out for Edward Snowden, for freedom of information and for freedom of the media.

Even I do not believe – yet – that I can attract or am deserving of such sudden popularity. Too boring, I thought, and so I let it go. I’m not paranoid enough to draw too many conclusions from such a coincidence.

By Friday, the number of pageviews had fallen to 1,279, and by Saturday to 1,058. Things seemed to be getting back to normal.

Today’s traffic has been furtive. In just over 12 hours, there have been over 40 anonymous efforts to post comments to my postings that appear to be meaningless but also appear to carry malicious viruses with them.

None of the seeming advertising that was being posted to my blog today could have had any interest to my readers.

I opened none of the links, thankfully. But while Google and Blogger have blocked all these attempts today, I still received email notices for every effort, with the links that failed to get through.

I am anxious to protect the small number of true readers of this blog, and to ensure that when you access these pages your computer is not infected with bots or malware. I pay careful attention each day to posted comments and delete any that have links to advertising that seems dangerous, malicious, distasteful, or that link to sites that run counter to the values I want to promote and encourage.

In particular, I delete comments and links that are racist, sexist, violent, homophobic, misogynist, pornographic and fascist. If anything slips through, let me know, please. When others are offensive, I can be ruthless.

I have resisted adding Captcha or similar software to this site because I want to encourage comments from real readers rather than making it more difficult for them. But I may have to do so sooner rather than later.

Meanwhile, I am delighted if this blog attracts more readers, but only if they are real readers. I feel sorry for the poor minions who designed the malware and bots that were intended to attack this site today – and with it, my laptop too.

And if one or two people were also taking offence at my remarks last Thursday about Edward Snowden, then perhaps it is time for them to move on too.