‘The kingdom of heaven has come near you’ 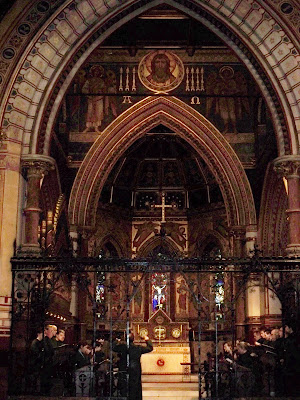 I know it’s not part of the expectations or the tradition here in Saint Bartholomew’s to have a sermon at the mid-day or mid-week Eucharist.

But I thought it a pity not to take a few moments to reflect on our Lectionary readings today.

The sons of Israel come to Egypt in a time of hunger and famine – last week Christian Aid launched an emergency appeal, saying 10 million people face starvation in East Africa and the Horn of Africa, where a food crisis has been brought on by two failed rainy seasons.

With famine come crises that include food shortages, water shortages, dying animals, life-threatening disasters for pregnant women, for children … for everyone in that region.

So, when the story in our reading from the Book Genesis talks about the land of Egypt being famished, that famine is spreading over the land, and that the people are crying out, we can imagine that Joseph’s brothers, fleeing their own problems, walked into a problem of truly Biblical dimensions – severe famine and all the anguish and grief it brings with them.

The other Twelve we encounter in our reading from the Gospel according to Saint Matthew are sent out into a world suffering from spiritual famine, and they are given authority over unclean spirits, and to cure every sickness and disease.

Joseph’s lost brothers, the ancestors of the 12 Tribes of Israel, move from despair in their own land to desolation in the Kingdom of Egypt.

The Twelve called by Christ and sent out by him are sent to the lost sheep of the House of Israel, with the clear command to proclaim the good news: “The kingdom of heaven has come near.”

Joseph’s brothers are put together in prison for three days … which, with the benefit of Christian hindsight, we can read in the light of the three days Lazarus spends in his tomb and Christ spends imprisoned in death.

Joseph’s brothers are betrayed by a sleight of hand involving money.

The 12 named in our Gospel reading include Judas, whose betrayal of Christ also involves a bag of money.

But the mission of Jacob’s sons in exile is a story that holds the promise of the Son of God also giving up everything, and in his earthly exile bringing us to salvation, bringing us into the kingdom.

The father Jacob grieves at the loss of his son; God the Father grieves at the death of his Son. But Joseph is not dead, and he invites his brothers to the banquet, which brings their famine and suffering to an end. And Christ is not dead, and he invites us to the banquet, which brings our famine and our suffering to an end.

And so, may all our thoughts, words and deeds, be to the praise, honour and glory of God, + Father, Son and Holy Spirit, Amen.

Canon Patrick Comerford is Director of Spiritual Formation, the Church of Ireland Theological Institute, and a canon of Christ Church Cathedral, Dublin. This address was delivered at the mid-week Eucharist in Saint Bartholomew’s Church, Ballsbridge, Dublin, on 6 July 2011.
Posted by Patrick Comerford at 13:00 No comments: