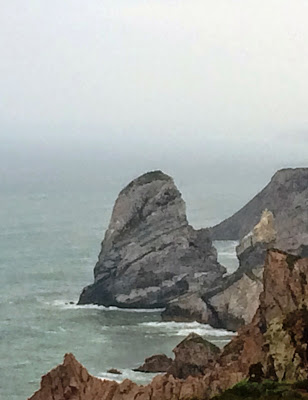 The Shipping Forecast on the BBC is part of my childhood and cultural memories. Although as a boy I had no interest in maritime weather conditions, I was fascinated by the repetition of the names of the sea areas during the night-time broadcast.

Where were places such as Fisher, Dogger, Heligoland, German Bight, North Utsire and South Utsire, and whatever happened to Finisterre?

Finisterre was to the west of Biscay, and was renamed FitzRoy in 2002 to avoid confusion with sea areas of the same name used in French and Spanish marine forecasts.

I could understand Land’s End … but Finisterre? Was there somewhere at the end of the world?

There is a place called Finistère at the extreme west of Brittany, and there is also Finisterre in Spain, or Cape Finisterre, a rock-bound peninsula on the west coast of Galicia, believed in Roman times to be the end of the known world.

However, I found yesterday [6 November 2014] that the westernmost point of the Iberian Peninsula and of continental Europe is Cabo da Roca in Portugal.

The cape is part of the Sintra-Cascais Natural Park, 42 km north-west of Lisbon. 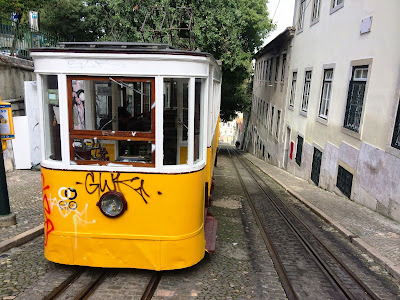 The original plan was to visit either Sintra or Estoril to see the places, the gardens and the pretty town in either location. Two of us had spent the morning sight-seeing in Lisbon, including visiting the local church dedicated to Saint Sebastian and taking the Gloria elevator for funicular from Praca dos Restauradores to the viewpoint at Sao Pedro de Alcantara for views across the city.

Early in the afternoon, we caught a train from Rossio, Lisbon’s central station, to Sintra. The place looked pretty, but we missed the hop-on, hop-off bus, and were waiting for the next one when the bus to Finisterre arrived and decided to go the ends of the earth. 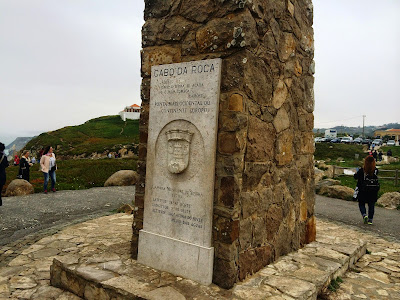 Cabo de Roca … at the ends of the earth … or the end of Europe (Photograph: Patrick Comerford, 2014)

It was a further 18 km by bus along a twisting narrow road lined with vineyards and through pretty villages with windmills, whitewashed houses with terracotta tiled roofs and plenty of rooms to rent.

When we got there, apart from looking over the precipice and the rocks, or looking up at the lighthouse, there was little else do at the this point, except to note our location (38°47′N, 9°30′W) which is inscribed on a stone plaque. 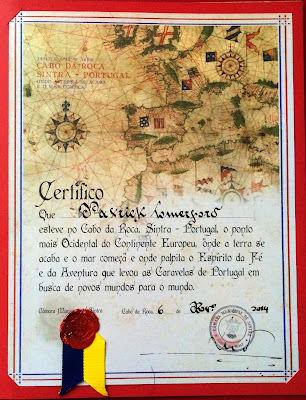 An unusual certificate in a remote part of Europe (Photograph: Patrick Comerford, 2014)

We had a glass of wine in the only café nearby, received an unusual certificate in the small tourist office nearby, and caught the next bus, which was going to Cascais.

The mist was coming in from the west, and it was like a drive along any part of the Atlantic coast of Ireland. We could have been in Achill, where they say if you cannot see the sea it must be raining, and if you can see the sea it is either about to rain or has just been raining. You hardly need the BBC shipping forecast to know that.

By the time we got to Cascais it was dark and raining. We caught the train back through Estoril and Belém along the coastal route to Lisbon, where we had dinner close on the Rua Augusta.

I return to Dublin this morning. 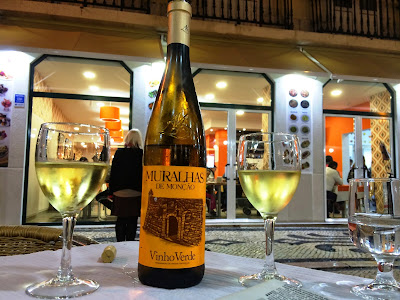 Dinner on the Rua Augusta at the end of a visit to Lisbon (Photograph: Patrick Comerford, 2014)

Posted by Patrick Comerford at 06:50 No comments: