The rain held off ... until I was about
to have a walk on Greystones beach 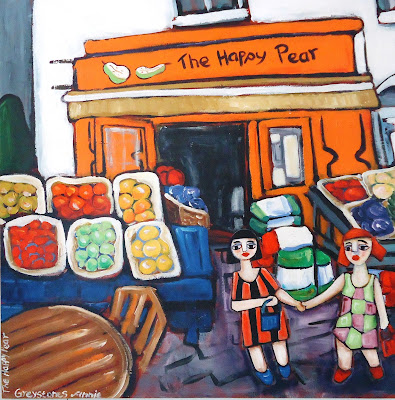 The Happy Pear .as it sees itself ... a painting upstairs (Photograph: Patrick Comerford, 2013)

I never got to go for a walk on the beach his afternoon.

After an hour or two in garden this morning, weeding and tidying, I was looking forward to a walk on the beach in Greystones, Co Wicklow.

We left in the early afternoon, and there was beautiful view of the Wicklow Mountains and the Glen o’ the Downs before we turned in at Delgany and made our way back into the Greystones.

While most other places throughout Ireland seems to have been marking the past week as Heritage Week, it seems they have been more reserved or limited in Greystones, and instead are marking just the weekend as Burnaby Heritage Weekend, with a scavenger hunt, a photographic exhibition, an evening of music, poetry and storytelling, guided tours of the Burnaby estate, a dog show, and a vintage day in Burnaby Park, with a children’s cricket match, vintage games and bowling. 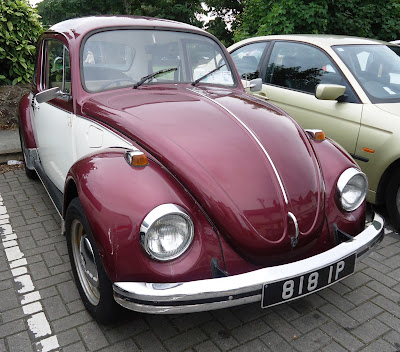 A vintage participant in the Burnaby Heritage Weekend in Greystones this afternoon (Photograph: Patrick Comerford, 2013)

The Burnaby estate, developed in 1895-1910, is said to Ireland’s first planned urban housing development, and takes its name from Colonel Frederick Gustavus Burnaby, who died in the Battle of Abu Klea in Sudan in 1885. The estate, with its arts-and-crafts, gate lodge-style houses, was designed by the Dublin architectural partnership of James Rawson Carroll and Frederick Batchelor.

We parked at Killincarrig Road, beside Burnaby Park, where we spotted a few vintage cars, including a spruced-up old Beetle Volkswagen and a very rusty old beetle that tootled by before I had a chance to photograph it.

We dropped into The Village Bookshop on Church Road to pick up a little reading for the week ahead – Mr Rosenblum’s List by Natasha Solomons and Snow by Orhan Pamuk. It was only later that I regretted I had not also bought the newly-published and generously-illustrated Greystones: Its Buildings and History which also marks the 25th anniversary of the Greystones Archaeological and Historical Society.

The happy menu board at the Happy Pear in Grestones, Co Wicklow (Photograph: Patrick Comerford, 2013)

Despite all the activities and busyness in Burnaby Park, there were grey clouds overhead, and we decided to eat first in the Happy Pear on Church Road, the main street in Greystones, hoping the rain would pass by the time we had finished eating.

Some people were braving it out and sitting outside on the street-side tables. But we decoded to eat upstairs. Between us we shared Lebanese puy lentil and aubergine stew; beetroot, feta and walnut fritters with carrot, hummus and alfalfa sprouts; two salads accompanying each plate; .followed by a double and a single espresso, and the Happy Pear’s own fig roll and brownie.

As we were eating, the rain came down. We came out onto a wet Church Road, with families scurrying with umbrellas and looking for shelter.

So, the rain held off a little ... but not long enough to allow that hoped-for walk on the beach.

Well, I suppose, at least we were not caught in the rain on the beach. But is summer coming to an end? I certainly hope not. 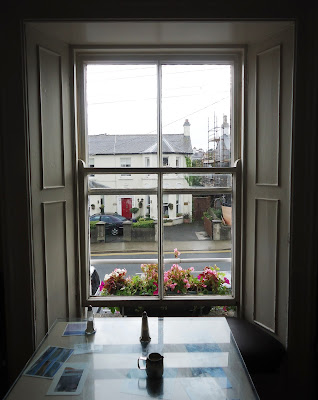 A table for two at the Happy Pear, looking out onto the rain on Church Road, Greystone’s main street (Photograph: Patrick Comerford, 2013)