Visiting the rock-carved churches and
monasteries of the Cappadocian fathers 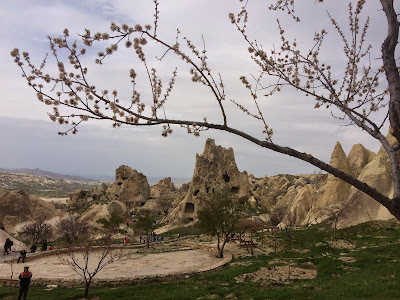 Looking out across the rock-hewn churches and the monastery at Göreme (Photograph: Patrick Comerford, 2015)

I imagine many of my theological friends and co-workers associate monasticism with Saint Benedict and his rule, and trace it back through the influences of Saint John Cassian to the Desert Fathers. And many of us think of the Cappadocian Fathers in terms of formulating key Christological and doctrinal phrases. But I wonder how many of us make the link between the early beginnings of monasticism and the Cappadocian formulations that led to our creedal expressions of Christianity.

Both came together this week when I walked from Göreme, where I am staying, to the nearby rock-hewn monastery and cave churches that date back to the early centuries of Christianity.

By the end of the second century, there was a large Christian community in Cappadocia, and two bishoprics were formed in area, one in Caesarea (present-day Kayseri) and one in Malatya. In the fourth century, Cappadocia was associated with three key patristic writers and saints: Saint Basil the Great (329-379), Bishop of Caesarea, his brother Saint Gregory (335-395), Bishop of Nyssa, and Saint Gregory Nazianzus (329-390), who became Patriarch of Constantinople.

As theologians, the three Cappadocian Fathers challenged heresies such as Arianism and their thinking was instrumental in formulating the phrases that shaped the Nicene Creed. Saint Basil is also remembered for his challenging social values: “The bread which you do not use is the bread of the hungry; the garment hanging in your wardrobe is the garment of him who is naked; the shoes that you do not wear are the shoes of the one who is barefoot; the money that you keep locked away is the money of the poor; the acts of charity that you do not perform are so many injustices that you commit.”

After visiting monasteries in Syria and the Egyptian Deserts, Saint Basil retuned to Cappadocia, he encouraged the hermits in the region to form themselves into communities and monasteries, and to worship together liturgically rather than alone.

The monastic buildings and the rock-hewn churches in Göreme are an early example of the influences of Saint Basil and his reforms, and they hold some unique examples of pre-iconoclast frescoes in the Byzantine world. 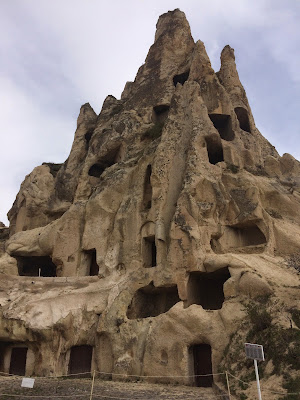 The monks used ladders or scaffolding to climb to the upper reaches of the seven-storey ‘Nunnery’ (Photograph: Patrick Comerford, 2015)

I began my visit at the six- or seven-storey rock-hewn mass known as the “Nunnery” or Monastery. Although it was closed off to visitors, this complex includes churches, chapels, a dining room, kitchen, rooms or cells for the monks who lived here and connecting tunnels. The monks probably used ladders or scaffolding to reach the higher levels. 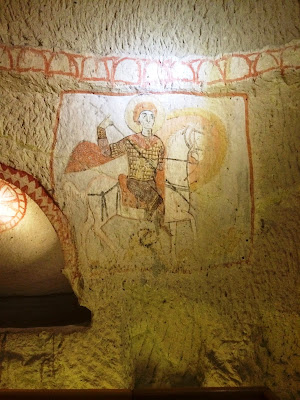 Appropriately, my next stop was at the barrel-vaulted chapel of Saint Basil dating back to the 11th century.

The image on the south wall represents Saint George slaying the Dragon. Saint George’s parents are said to have been from Cappadocia, and he said to have died a martyr’s death when he was beheaded in Lyda in 303 AD. 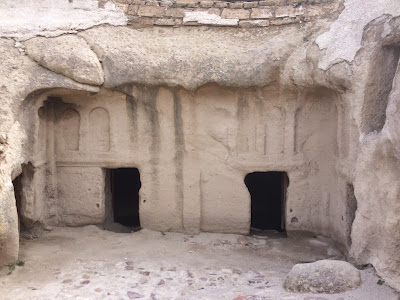 The Apple Church is a small cave church carved into the rock ca 1050. Here the frescoes are beginning to chip off, revealing a layer of earlier paintings underneath. They depict saints, bishops and martyrs, and the Last Supper with the symbolic fish – the letters of the Greek word for fish, ΙΧΘΥΣ, represent the initials of Jesus Christ, Son of God, the Saviour. The name of the church refers to a reddish orb in the left hand of the Archangel Michael in the dome of the main apse. 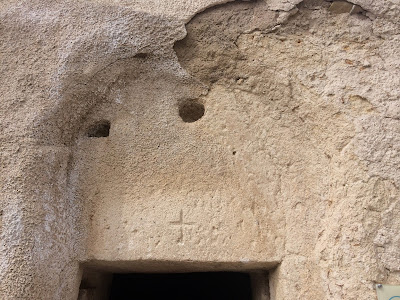 A cross carved over the door into the Church of Saint Barbara (Photograph: Patrick Comerford, 2015)

The Church of Saint Barbara is named in honour of an Egyptian martyr who was imprisoned by her father who tortured and killed her because of her Christian faith. The church was built in the late 11th Century, and has a cross-dome with one central apse, two side apses and two columns. The dome depicts Christ on the Throne, with geometrical patterns painted in red ochre directly on the rock. The north wall has a fresco of Saint George and Saint Dimitrios, both on horseback fighting against the dragon and a snake. 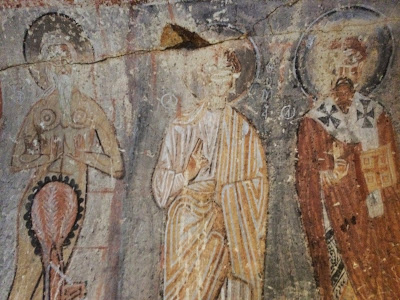 The Church of Saint Onuphorius is also known as the Snake Church because of its fresco of Saint Dimitrios and Saint George slaying a dragon that looks like a snake. This is a simple barrel-vaulted church with a low ceiling and long nave. It also has a fresco of the Emperor Constantine and his mother Saint Helena holding the True Cross.

Saint Onuphorius, lived as a hermit near Thebes in the Egyptian Desert, is shown on the upper wall to the right of the entrance. He is depicted with a long grey beard and wearing only a fig leaf, standing beside Saint Thomas and Saint Basil. 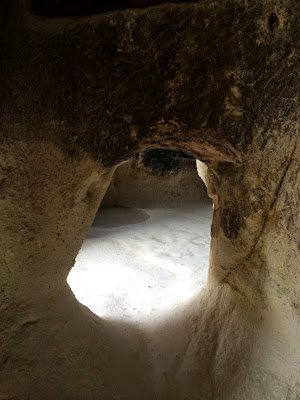 Tunnels link the larder, the kitchen and the refectory (Photograph: Patrick Comerford, 2015)

The larder, the kitchen and the refectory are side by side in one massive area of rock, linked together by tunnels. At one end of the long table in the refectory that may have seated up to 40 monks, is an image of the Last Supper. 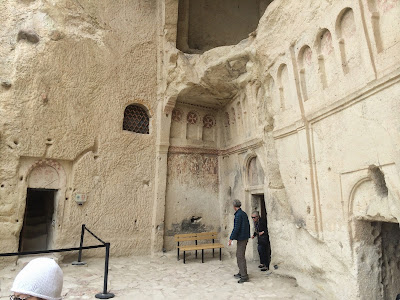 The courtyard of the Dark Church (Photograph: Patrick Comerford, 2015)

A narrow stairs leads up to the courtyard in front of the Dark Church (Karanlik Kilise), where the frescoes have been preserved in their rich colours mainly because very little daylight enters it from a small opening in the narthex. 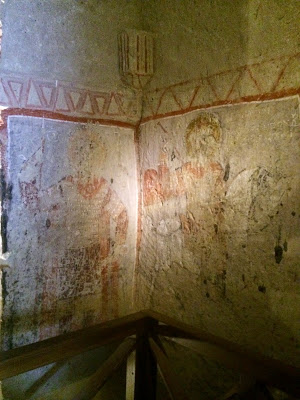 Saint George and Saint Dimitrios in a corner in the Church of Saint Catherine (Photograph: Patrick Comerford, 2015)

The Church of Saint Catherine is between the Dark Church and the Sandals Church. It has nine floor graves and two burial niches, and the frescoes include images of the patron saint, the doctors of the Church and Saint George and Saint Dimitrios. 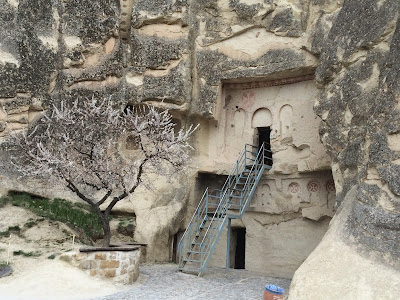 The Sandals Church is built on a level above the Refectory (Photograph: Patrick Comerford, 2015)

The Sandals Church (Çarıklı Kilise) is built on two levels. It may have been named originally as the Church of the Holy Cross. Its present name comes from two footprints at the entrance to the church at the upper level, beneath a fresco depicting the Ascension. This fresco is said to be an exact copy of one in the Church of the Ascension in Jerusalem. The other frescoes in the church include an early, 11th century representation of the Hospitality of Abraham.

The refectory is on the ground-floor level beneath the church, and here again is a fresco depicting the Last Supper at one end of the long dining table. 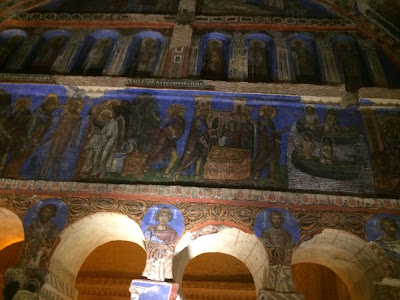 Inside the Church of the Buckle, the largest church in Göreme (Photograph: Patrick Comerford, 2015)

The final visit was to the Church of the Buckle (Tokalı Kilise), the largest church in Göreme, which stands outside the open-air museum. The church, which was restored in the 1980s, divided into four section: the Old Church, the larger New Church, the Parakklesion, and the Lower Church.

Like the Nicephoras Phocas Church in Çavuşin, some of the frescoes in the Old Church, including the Murder of Zacchariah and the Flight of Elizabeth, are based on the apocryphal Gospel of Saint James, explained perhaps by the semi-isolation of this part of Cappadocia.

Another regional trait is found in naming otherwise anonymous characters through their association with objects or actions in the Bible. One example is the figure filling an urn with water in the Miracle at Cana scene who is named Antlioi, derived from the Greek word “to draw out.”

The Old Church is decorated with pale hues of red and green painted in strips to represent scenes from the New Testament and depictions of some saints.

The elaborate decorative of the Old Church depicts the Christological cycle. On each side of the vault there are three parts of the narrative containing 32 scenes depicting the traditional tripartite division of the life of Christ: his infancy, his miracles and his Passion, ending with the Resurrection. The spine of the vault is decorated with a row of prophets and saints.

The New Church was carved out of the eastern wall of the Old Church and decorated with Eastern-style arches and a series of arcades. Panels of rich indigo painted with pigments from the lapis lazuli stone dominate the New Church. These include scenes from the New Testament, the miracles of Christ, the first deacons, events in the life of Saint Basil, depictions of Saint Leades, one of the Forty Martyrs, and Saint Menas.

The Parakklesion, to the left side of the New Church, is a barrel-vaulted chapel with a single apse. The Lower Church has three aisles and a burial space or crypt.

Beyond, as we walked back to Göreme, there were signs pointing to more churches to discover and explore. This was not only a field trip for Patristic studies but an appropriate pilgrimage to the home of the Fathers at Easter time.