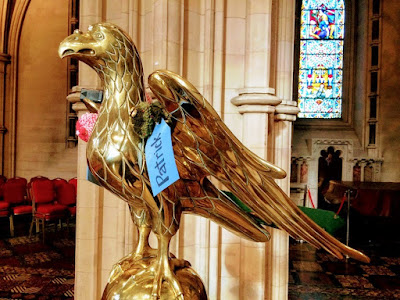 I cannot help noticing that one of the sheep hidden around Christ Church Cathedral, Dublin, by the Revd Abigail Sines in a children’s Christmas trail is named ‘Patrick’ and hangs delicately from the wings of the eagle on the lectern.

I wondered how much of a distraction Patrick proved to be during Monday evening’s Service of Nine Lessons and Carols.

‘The Wexford Carol,’ which was sung to John Rutter’s setting on Monday evening, includes the lines:

I’m sure those shepherds in Bethlehem kept their sheep away from cathedral lecterns and soaring eagles.

Once again, this was a beautifully planned and delivered service, and I wrote yesterday afternoon [20 December 2016] about one of the carols, the Coventry Carol, which seems to have been a mainstay of many carol services and radio programmes this year. But I was also pleased that the service included two carols with tunes by Ralph Vaughan Williams.

Most people know the words of ‘O Little Town of Bethlehem,’ and its words provide commentators with ready illustrations for Christmas-time editorials wondering when ‘glad tidings’ may come to towns like this in the Middle East, meeting ‘the hopes and fears of all the years.’

But how many people know that the tune for this popular hymn, ‘Forest Green,’ was arranged by Ralph Vaughan Williams – or, for that matter, know where Forest Green is?

‘Forest Green’ is an English folk tune associated with the ballad ‘The Ploughboy’s Dream.’ Vaughan Williams turned ‘Forest Green’ into a hymn tune for The English Hymnal (1906), which he co-edited with Percy Dearmer, using the tune as a setting for ‘O Little Town of Bethlehem.’

This Forest Green near Nailsworth is in one of the Stroud Valleys in the Cotswolds. Saint George’s Church in Nailsworth was designed in the Early English style by MH Medland of Gloucester and was consecrated in 1900. Because of a lack of funds, the church originally consisted only of a nave, aisles and south porch, without any chancel or tower. The chancel, Lady Chapel and vestries, dedicated as a World War I memorial, were added in 1939, but the church tower was never added.

Three of the stained glass windows in the south aisle, depicting Saint Luke, Saint Paul and Saint Barnabas, are by Charles Eamer Kempe. Three others depict Saint Richard of Chichester, Saint George and Saint Martin. The other window is by Herbert Bryans and shows the prophetess Anna. The East window was designed by Peter Strong and was installed in 1977.

However, the melody ‘Forest Green’ was collected by Vaughan Williams from a singer, Henry Garman, of Forest Green, Surrey, in 1903, and combined with the words ‘O little town of Bethlehem’ in the English Hymnal in 1906.

Abinger is a large, well-wooded and mostly rural civil parish in the Mole Valley in Surrey. More than half of the parish lies on the Greensand Ridge, while the remainder is divided between the Vale of Holmesdale and the North Downs. Abinger is recorded in the Domesday Book. Saint James’s Church at Abinger Common is a II* class listed building with an 11th century nave, a chancel and north chapel built in 1220.

Vaughan Williams collected ‘The Ploughboy’s Dream’ from Henry Garman of this Forest Green in 1903. Henry Garman was born in 1830 in Sussex, and in the 1901 census he was living in Ockley, Surrey.

Vaughan Williams’s own manuscript notes that Garman was a ‘labourer of Forest Green near Ockley – Surrey. (Aged about 60?).’ However, Garman would have been nearer 73 when he shared the tune.

‘Forest Green’ is shaped in rounded bar form (AABA), and has the cheerful characteristics of folk tunes, which help to support the humanness of this text.

It was adapted into a hymn tune harmonised by Vaughan Williams, and was first published in the English Hymnal in 1906.

The other Vaughan Williams setting on Monday evening was the Herefordshire Christmas Carol, ‘This is the Truth Sent from Above,’ which is one of several folk tunes preserved and popularised by Ralph Vaughan-Williams.

In 1909, he transcribed it from Ella Mary Leather, a collector of Herefordshire folk music, who had herself received it from a Mr W Jenkins, a folk singer from King’s Pyon.

This English folk carol was collected in the early 20th century by many English folk song collectors in Shropshire and Herefordshire and a number of variations on the tune exist, although the texts remains broadly similar.

Cecil Sharp collected an eight stanza version of the carol from Seth Vandrell and Samuel Bradley of Donninglon Wood in Shropshire, although Sharp notes that a longer version existed in a locally-printed carol book.

Vaughan Williams collected a different, Dorian mode version of the carol at King’s Pyon, Herefordshire, in July 1909 from Ella Mary Leather, a folk singer who learned the carol through the oral tradition. This version, which contains only four stanzas, is sometimes known as the Herefordshire Carol.

Vaughan Williams first published the melody in the Folk-Song Society Journal in 1909, but he credited it as being sung by a Mr W Jenkins of King’s Pyon.

Vaughan Williams later used the carol to open his Fantasia on Christmas Carols in 1912.Gerald Finzi, with permission from Vaughan Williams and Ella Leather, also used the melody as the basis of his 1925 choral work The Brightness of This Day, substituting the text for a poem by George Herbert.

The descant is by Sir Thomas Armstrong (1898–1994), who studied at the Royal College of Music with Gustav Holst and Vaughan Williams, who became a life-long friend. Later, he was organist of Exeter Cathedral, organist of Christ Church, Oxford, and Principal of the Royal Academy of Music. 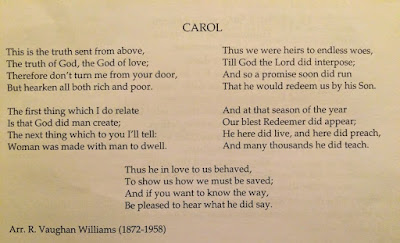 ‘Woman was made with man to dwell. Thus we were heirs to endless woes’ ... an unfortunate coincidence linking the last line of Verse 2 and the first line of Verse 3 in a much-loved carol (Photograph: Patrick Comerford, 2016)

The text of this carol recalls the fall from grace of Adam, and the promise of redemption by Jesus. However, in almost all printed editions, several of the verses are missing. The missing text leads to a presumably unintended faux pas, with the second verse ending ‘Woman was made with man to dwell,’ and the next verse starting ‘Thus we were heirs to endless woes.’

Of course, man’s woes do not stem simply from dwelling with woman. The full version reads:

This is the truth sent from above,
The truth of God, the God of love:
Therefore don’t turn me from your door,
But hearken all, both rich and poor.

The first thing which I do relate
Is that God did man create,
The next thing which to you I’ll tell,
Woman was made with man to dwell.

Then, after this, ’twas God’s own choice
To place them both in Paradise,
There to remain, from evil free,
Except they ate of such a tree.

But they did eat, which was a sin,
And thus their ruin did begin.
Ruined themselves, both you and me,
And all of their posterity.

Thus we were heirs to endless woes,
Till God the Lord did interpose,
And so a promise soon did run,
That he would redeem us by his Son.

And at this season of the year
Our blest Redeemer did appear,
Here he did live, and here did preach,
and many thousands he did teach.

Thus he in love to us behaved,
To show us how we must be saved;
And if you want to know the way,
Be pleased to hear what he did say:

‘Go preach the Gospel,’ now he said,
‘To all the nations that are made!
And he that does believe on me,
From all his sins I'll set him free.’

O seek! O seek of God above
That saving faith that works by love!
And, if he’s pleased to grant thee this,
Thou ’rt sure to have eternal bliss.

God grant to all within this place
True saving faith, that special grace
Which to his people doth belong:
And thus I close my Christmas song. 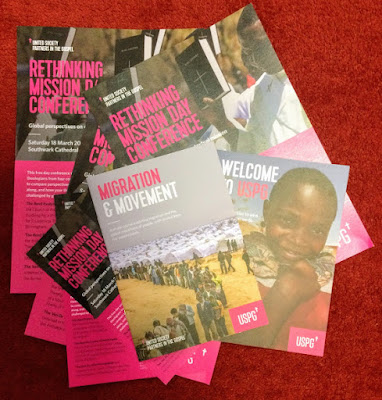 ‘Give thanks for the work of the Church of North India and the Delhi Brotherhood Society as they reach out to children, with a special emphasis on education for girls’

This is the last week of Advent, and we are just four days away from Christmas Day. Throughout this time of preparation for Christ’s coming at Christmas, I am praying each morning in Advent and using for my reflections the prayer diary of the Anglican mission agency, USPG (United Society Partners in the Gospel).

Give thanks for the work of the Church of North India and the Delhi Brotherhood Society as they reach out to children, with a special emphasis on education for girls.