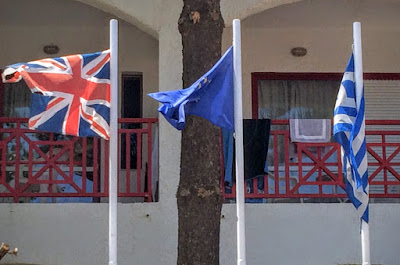 The flags of the UK, the EU and Greece together in Tsesmes near Rethymnon … how long shall they continue flying like this? (Photograph: Patrick Comerford, 2016)

Without the combination of the blue and white of the Cross of Saint Andrew, the red and white of the crosses of Saint George and Saint Patrick alone is going to look a messy effort by a young child playing with pencils or crayons.

The Cross of Saint George on its own was proudly flown throughout England until that ignominious defeat at the hands of Iceland. But apart from season football enthusiasm, the English flag is often hijacked by extreme nationalists.

I am often ashamed of how the Tricolour has been hijacked and abused by political extremists in Ireland, and embarrassed by the way the Union Flag is abused by extremists in Ukip or in Northern Ireland too. Yet there is nothing to be ashamed of in either flag: they represent peace and harmony between different traditions and culture, and bring together the different traditions on two islands. 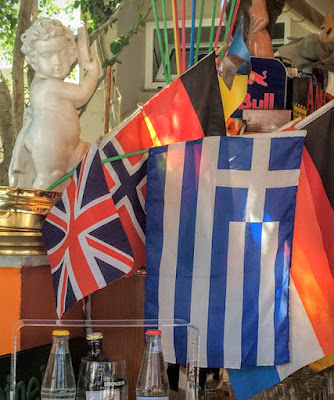 The flags of Greece, the UK, and other European countries in a bar near Rethymnon (Photograph: Patrick Comerford, 2016)

On the other hand, Greeks are never ashamed of their national flag and what it represents. Flags fly outside homes and churches, in bars and on office desks, and are proudly displayed at every opportunity.

The flag is known popularly in Greek as Γαλανόλευκη or Κυανόλευκη, the ‘sky-blue-white’ or the ‘blue-white.’ It has nine equal horizontal stripes of blue alternating with white, and a blue canton with a white cross.

The symbolism of blue and white has many interpretations, but they are usually seen as the colours of the Greek sky and sea. The shade of blue on the flag has varied over time, from light blue to dark blue.

The flag was first adopted by the Greek National Assembly at Epidaurus in 1822. Some Greek historians claim it is derived from coat of arms of the Kallergis family, a powerful political family in Crete who were descended from the Byzantine Emperor Nicephorus II Phocas (963–969 AD). However, it is more likely that the design was influenced by the stars and stripes flag of the newly independent United State of America. 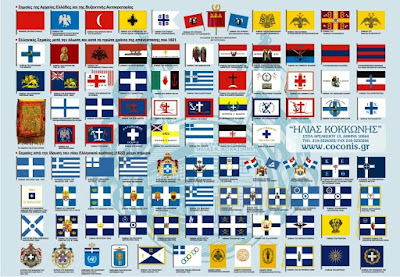 Greeks have used several flags in the past

Under Ottoman domination, Greeks used several unofficial flags, usually the Byzantine double-headed eagle. But the closest thing to a national flag that Greeks had under Ottoman rule was a flag used by Greek shipping merchants that combined red stripes for the Ottoman Empire and blue stripes for Orthodoxy. This flag was abandoned when a treaty allowed Greek-owned merchant ships to fly the Russian flag.

From the late 18th century, a blue cross on a white background became the most popular revolutionary flag among Greeks, and almost became the national flag at independence.

The flag featuring the present design was created and first flown at the Evangelistria monastery in Skiathos in 1807, when several revolutionary leaders, including Theodoros Kolokotronis and Andreas Miaoulis, gathered there to plan an uprising, and were sworn to this flag by the local bishop. But a large variety of flags were used during the early days of the Greek War of Independence (1821-1829).

The First Greek National Assembly in 1822 abolished all revolutionary flags and adopted a new flag. No-one knows why they selected a white cross on a blue background rather than the more popular blue cross on a white background – it may even have been a mistake, but the design became immediately popular with Greeks everywhere.

At times, kings of Greece have tried to add their royal coats of arms or royal crowns to various versions of the flag and tried to change its shape. When the Second Hellenic Republic was formed in 1924, the crowns were removed from all flags. The crowns returned again with the restoration of the monarchy in 1935, only to be removed once more by the colonels in 1967. 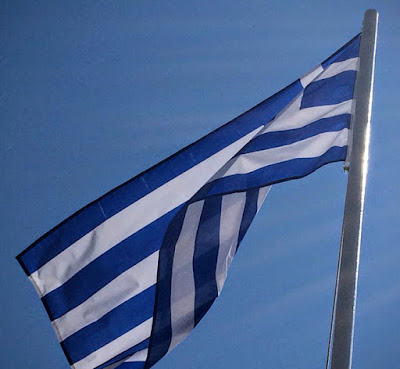 Greek law regulates the use of the flag, but does not specify the shade of blue (Photograph: Patrick Comerford, 2016)

Since 1978, Greek law has specified that no other designs or emblems can be shown on the flag. But the law does not specify the exact shade of blue on the flag, so that hues may vary from very light to very dark blue.

Indeed, the ancient Greeks classified colours by whether they were light or dark, rather than by their hue. The Greek word for dark blue, kyaneos, could also mean dark green, violet, black or brown. The ancient Greek word for a light blue, glaukos, also could mean light green, grey, or yellow.

The terms for blue and green have changed completely in the transition from Ancient Greek to Modern Greek. Ancient Greek had γλαυκός (glaukos) for clear light blue, contrasting with χλωρός (chloros) for bright green. Kυανός, which became cyan in English, means either a dark blue substance or just blue. Modern Greek has πράσινο (prásino) for green and γαλάζιο (galázio) or θαλασσί (thalassí, sea coloured) for light blue or sea blue. The recent loan μπλε (ble, French bleu) is also used for blue.

In the Modern Greek language, there are additional names for light and dark blues/greens:

As a rule, the first two words of the list are accepted as shades of blue, and the rest as shades of green. Also βιολέ (violé or βιολετί (violetí) for violet blue, which is, however, usually considered as a shade of purple, rather than blue.

Officially, the flag should fly from 8 a.m. until sunset, from a white mast topped with a white cross on top of a white sphere. It should never be defaced by writing or symbols upon it, hung from windows or balconies, or used for commercial purposes or as a corporate logo.

One flag I occasionally see flying here is the old flag of Crete. From 1898 to 1908, the flag of the Principality of Crete was blue with a white cross and a red canton charged with a white star. The five-pointed star on the flag symbolised Ottoman suzerainty, and so the flag was not popular when it was used. It was officially abolished with the island’s unilateral proclamation of union with Greece in September 1908.

It can be seen from Vodafone TV ads, to number plates on cars, to notices selling the Cretan flag on e-bay. The flag is sometimes seen flying in Crete today, but not officially, and it seems to be associated with groups seeking greater autonomy for Crete.

But then all flags are in danger of being hijacked and manipulated by political extremists and football hooligans in equal measure.