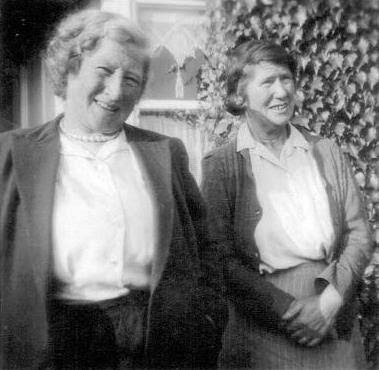 I have written recently on the different roles were played by many members of the Comerford family during the events in Easter Week 100 years ago. Although no member of my immediate family was directly involved in the Easter Rising, I was interested to learn recently that my grandmother had a second cousin whose wife played a key role in the events in north Co Dublin in 1916.

My grandmother Bridget (Lynders) Comerford (1875-1948) was living in Rathmines in Easter 1916, while her husband, Stephen Edward Comerford (1867-1921), was posted with the Royal Dublin Fusiliers in Thessaloniki in northern Greece, about to be invalided home with malaria.

The Lynders family has lived in the Portrane and Donabate area since the early 18th century, and was closely related to an inter-married nexus of families on the peninsula.

This second Joseph Lynders and his wife Elizabeth Bates were the parents of a large family, including John Lynders, who was born in 1885 and who married Thomasina Weston (1887-1962) of Turvey Hill, Donabate.

The sisters Thomasina Lynders and Julia Weston acted in intelligence liaison roles for Thomas Ashe, the commandant of the Fingal Brigade during Easter week. They carried messages between units, prepared food and helped to bury the dead.

The four Weston siblings were the children of Patrick and Kate Weston. They all survived the Rising, all were awarded medals and military pensions, and Charlie Weston later became one of the first officers of the Irish Free State Army.

Her bother, Charlie Weston was an early member of the Gaelic League and was a co-founder of the Black Raven Pipe Band. In 1913, he and his brother Bartle Weston joined the Irish Volunteers as members of the Lusk Company and the Swords Company. These were parts of the 5th Battalion, Dublin Brigade of the Irish Volunteers, known as the Fingal Brigade in North County Dublin. They were under the command of Thomas Ashe from Kerry, a teacher in Corduff, near Lusk. His second-in-command was Richard Mulcahy.

On Monday morning, 24 April1916, Ashe received orders from James Connolly to send 40 of his battalion to the GPO. Ashe with his force of about 60 men, decided to send 20, and on Tuesday 25 April they marched under Captain Dick Coleman to Dublin City. Ashe believed a raid on a nearby police barracks would release some of the pressure on those fighting in Dublin City.

On Wednesday 26 April, the Fingal rebels raided the RIC stations in Swords and Donabate. In the raids, they took many weapons including 10 carbines, three revolvers and some ammunition. Later, they cut the rail links at Donabate, and the telegraph lines at Swords, and then moved on to Rogerstown. Charlie Weston led the unit that bombed bridges and attacked RIC stations around North County Dublin, including the RIC station in Donabate.

After night fell, the unit moved under the cover of darkness on the police barracks at Garristown but found it deserted. Ashe and Mulcahy then led their force to Baldwinstown, where they set up camp for the night.

The next morning, Thursday 27 April, the battalion was reorganised and those considered too old or too young were sent home. With about 50 men left, the Battalion moved on towards Ashbourne, and they set up a base camp in a deserted farmhouse between Garristown and Ashbourne.

On Friday 28 April, the day of the battle at Ashbourne, Ashe split the unit into four sections that acted like flying columns. They planned to destroy the Midland and Great Western Railway (MGWR) line that ran through Batterstown in a move to block troop reinforcements being sent from Athlone into Dublin.

At Ashbourne, they surrounded the police barracks, and the so-called Battle of Ashbourne marked the first time guerrilla warfare was used in Ireland. In a five-hour battle, eight RIC officers were shot dead, 18 wounded and 96 people were taken as prisoners.

Ashe and Mulcahy then set up camp at New Barn in Kilsallaghan and await further orders. But when the order came from Pearse, they were told to surrender. Mulcahy went to Dublin to verify the order, after which the 5th Battalion, Dublin Brigade, arranged a surrender to the cavalry, and were taken to Richmond jail. Ashe was sentenced to death for his role, but this was later commuted to penal servitude for life.

Mulcahy was released from Frongoch Internment Camp in Wales in December 1916. He went on to become Commander-in-Chief of the Irish Free State Army in 1921 and Minister for Defence during the Civil War.

Charlie’s sister, Thomasina Lynders, was born on 13 March 1887. She joined Cumann Na mBan in 1915, soon after it was founded. During Easter week 1916, she acted in an intelligence liaison role, under the command of Ashe.

On Easter Day, 23 April 1916, the day before the rising, she became involved in the mobilisation, and made her way to Rathbeale, where she remained all day. She returned on Easter Monday, 24 April 1916, and contacted the volunteers who had not mobilised due to confusion over whether the Rising was going ahead.

Thomasina Lynders remained with the Fingal Brigade throughout Easter week, treating the wounded from the Battle of Ashbourne and helping with the removal and burial of two rebels who were kille. She also collected information on RIC and military movements, carried dispatches and directed people who wanted to join up to rebel camps.

When she applied for a military pension years later, Thomasina Lynders said her role during the Rising included “keeping in touch with Volunteer camps, taking orders from Comdt Thomas Ashe, and associated activity as a unit in battalion operations, in scouting, intelligence work, and in providing food and clothing, etc.”

When her neighbour Michael McAllister from Donabate refused to surrender after the rising, Thomasina hid him in her house for seven months.

After 1916, she remained an active member of Cumann na mBan, working in central office and continuing as an active member of the Fingal Brigade. When the rebels were released from prison in Britain, she organised a reception to welcome them home and collected funds for them. She also organised fund-raising dances and flag days and campaigned in elections.

Her sister Julia (Mary) Weston was another of the 250 women involved in the Rising. In her own words, Julia’s role involved “keeping in touch with volunteer camps and taking orders from Comdt Ashe,” along with scouting and intelligence work, and providing food. Her pension papers describe Julia as having the rank of Acting Confidential Intelligence Officer. 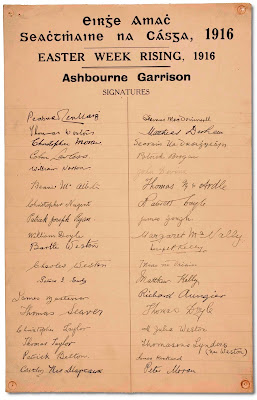 The signatures of four members of the Weston family, including Thomasina Lynders, are included in the Ashbourne garrison

The four Weston siblings all survived the Rising. All were awarded medals and military pensions, and they supported the pro-Treaty Cumann na nGaedheal.

After the formation of the Irish Free State, Thomasina and her husband John Lynders and they ran a shop on North Street, Swords, and she lived there until she died on 4 January 1962.

Meanwhile, Bridget Lynders’s husband, my grandfather Stephen Edward Comerford, was discharged from the army on 3 May 1916, three days after the Easter Rising ended, and invalided back to Dublin from Thessaloniki.

Malaria was life-threatening but life-saving – for a few months at least. World War ended on 11 November 1918 and a month later, on 14 December 1918, his youngest child – my father Stephen Edward Comerford – was born in Rathmines.

But my grandfather’s health continued to deteriorate, no more children were born, and he died alone in hospital at the age of 53. He is buried with my grandmother in Saint Catherine’s old Church of Ireland churchyard in Portrane, Co Dublin.