An afternoon filled with light in
Saint Anne’s Cathedral, Belfast 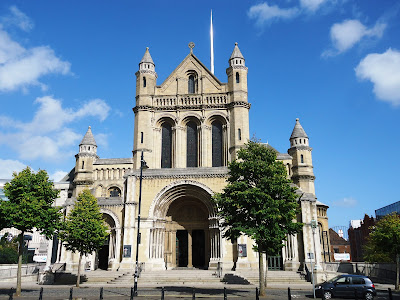 I was in Saint Anne’s Cathedral in Donegall Street, Belfast, yesterday afternoon [Sunday 15 September 2013] for the ordination of the Revd Roderick Smyth as deacon to serve in the parish of Saint John the Evangelist, Malone Road.

There was a very warm welcome from the Dean of Belfast, the Very Revd John Mann, and we walked around the tour for some time before the Ordination Service.

Saint Anne’s is an unusual cathedral for it serves two separate dioceses (Connor and Down and Dromore) which have their own cathedrals (in Lisburn, Downpatrick and Dromore), yet it is the seat of neither bishop, although they both have seats in the chancel.

Belfast received its first charter in 1613, but remained a city without a cathedral for centuries. 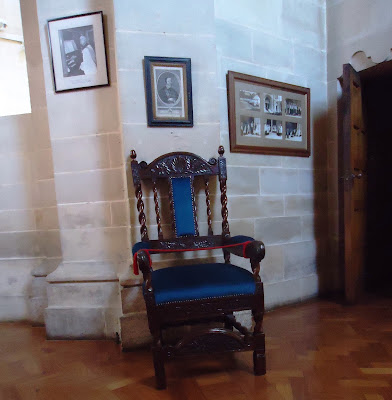 The first proposal for a cathedral in Belfast came from the Dean and Chapter of Connor in 1860. At the time Connor and Down and Dromore were united as dioceses, ever since the saintly Jeremy Taylor was bishop after the Caroline Restoration in the 1660s. So the scheme was not as geographically difficult as it now appears.

After the proposal for a cathedral in Belfast was presented to the Diocesan Council by Bishop Thomas Welland, the project was taken up enthusiastically by Henry Stewart O’Hara when he became Rector of Belfast in 1894.

Sir Thomas Drew (1838-1910) was chosen as architect, and the foundation stone was laid in 1899 by the Countess of Shaftesbury in the presence of the Archbishops of Armagh and Dublin. 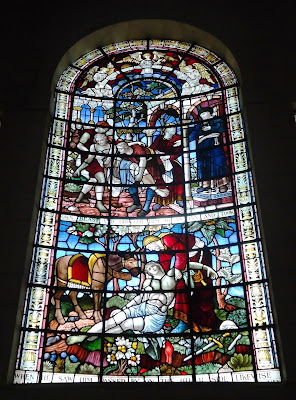 The old parish church of Saint Anne continued in use while the new cathedral was being built around it and the old church was not demolished until the end of 1903. Today, the the only remaining feature from the old church is the Good Samaritan window in the sanctuary.

The nave of the cathedral was completed in 1904 and was consecrated by Bishop Welland that June.

On the north side of the nave, running from the West Doors to the Choir, the following corbels are set above each column or respond: the Archangel Gabriel, Bishop George Berkeley, Dean Henry Stewart O’Hara, Archbishop William King, Provost George Salmon, Bishop Jeremy Taylor, and the Archangel Michael. 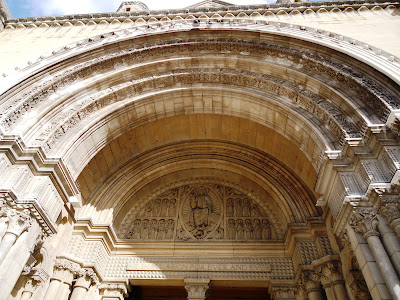 The West Front of the cathedral was built in the 1920s (Photograph: Patrick Comerford, 2013)

The west front of the cathedral was built in the 1920s as a memorial to the men and women of Ulster who died in World War I. The central crossing was built in the early 1920s. The Baptistery was dedicated in 1928. The Chapel of the Holy Spirit, with mosaics depicting Saint Patrick, was dedicated on 5 July 1932, the 1,500th anniversary of the arrival of Saint Patrick in Ireland. 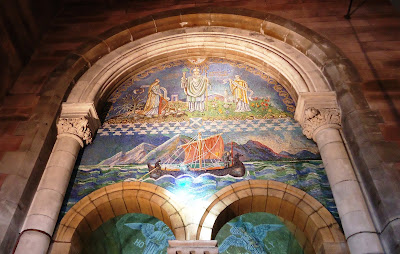 The only tomb in the cathedral is that of the Unionist leader Edward Carson, who was given a state funeral in 1935 and buried in the south aisle.

The ambulatory, at the east end of the cathedral, was built in the 1950s. When Bishop Jeremy Taylor’s old church at Lower Ballinderry was restored some years ago, portions of its ancient oak furniture were made into a chair. The chair is now placed beneath his portrait on the north side of the ambulatory, providing a link with the great Bishop of Down and Connor and Dromore who is commemorated in the corbel above the Pillar of Music on the north side of the nave.

A 40-metre stainless steel spire, the “Spire of Hope,” was installed on top of the cathedral in 2007.

Belfast Cathedral is probably best known for the “Black Santa” sit-outs at Christmas, first organised over 30 years ago by Dean Samuel Crooks. The tradition has been continued by successive deans, including the present dean, the Very Revd John Mann, and the chapter members.

During coffee in the side aisles after the ordination service, Dean Mann pointed out a number of features in the cathedral that I had missed earlier in the afternoon. By then, the sun was lowering in the west, and its rays were shining brightly through the West Door, filling this modern cathedral with light. 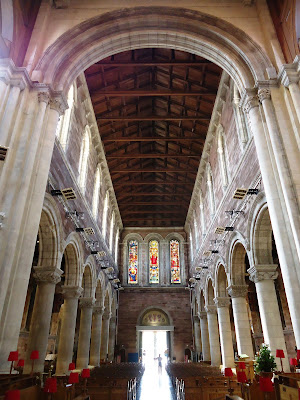