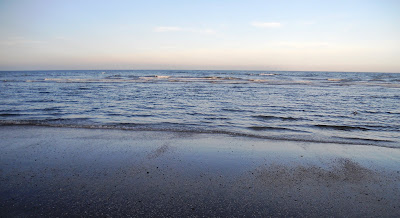 Looking out to the Irish Sea below Relish in Bettystown in the early evening light (Photograph: Patrick Comerford, 2012)

The afternoon temperatures rose to the low 20s today [8 September 2012], and it was a bright sunny afternoon, with bright blue skies.

We booked a table for two in the early evening at Relish in Bettystown, Co Meath, but first headed out to Mornington, near Drogheda, at the mouth of River Boyne that separates Co Meath and Co Louth.

Before going for a walk along the shoreline we had a look at the Maiden Tower, which was built by 1582, the boathouse at the Victorian Lifeboat Station, which closed in 1926 and is now a private house, and the tower known as the Lady’s Finger. 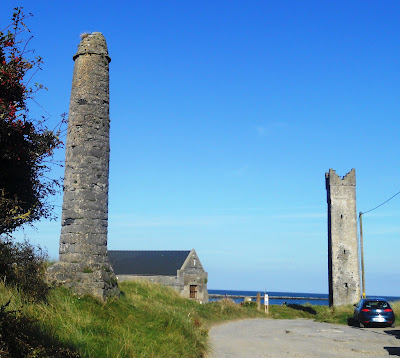 The Lady’s Finger (left), the boathouse of the Lifeboat Station, and the Maiden Tower at Mornington (Photograph: Patrick Comerford, 2012)

The story of the Maiden Tower and the Lady’s Finger in Mornington dates back to the 16th century, when two beacons were built to mark the mouth of the Boyne and to warn ships approaching the port of Drogheda of the river bar at Mornington and when the Elizabethan war with the O’Neills of Ulster raised fears of a Spanish invasion.

The Maiden Tower is 18.2 metres (60 ft) high, while the Lady’s Finger is a round tower tapering to a point 13 meters high. But how did they get their names?

A local story says a young woman threw herself from the top of the Maiden Tower believing her lover had been lost at sea. She sustained an arm injury that resulted in one of her fingers being left sticking up and so, it is said, the two towers got their names.

The Maiden Tower was already standing in 1582, when there were proposals to build a tower at Ringsend in Dublin of the same height and strength “of a perpetual contynuance licke the towre at Drogheda.”

The countenance of the tower was marred this afternoon by the gruesome sight of a dead pigeon hanging by a string from the top, and the Boyne shoreline below, although it was pretty to look at, was covered in flies, attracted by the late summer sun and the dirty foamy water washed in with the tide.

Above the sand dunes, an abandoned and dilapidated building was covered in graffiti, including a slogan saying: “Jews Out, Bad.” 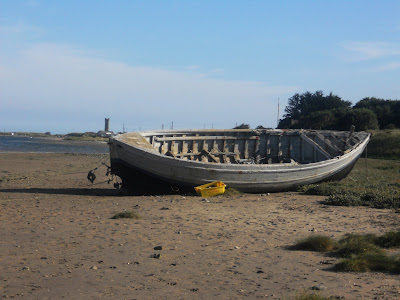 A boat on the shoreline at the mouth of the River Boyne in Mornington late this afternoon (Photograph: Patrick Comerford, 2012)

And yet there was a beauty along the shoreline, with the fast flowing waters of river and tide meeting, and a few wooden boats in various stages of abandon.

We drove back south to Bettystown for our meal in Relish, with its beautiful views across the sand dunes and the wide stretch of beach to the Irish Sea.

The staff were quick to find vegetarian items as alternatives to the starters on the “Early Bird” menu. Once again we had an excellent meal, before stepping out onto the dunes and down onto the beach, with views in the evening’s late summer sun that stretched along the sand and the sea north to Mornington and beyond, and south to Laytown and the estuary.

We stopped briefly in Donovan’s for the Guardian and a bottle of Chianti, to celebrate the last week in Tuscany. We were home in time for the Last Night at the Proms. 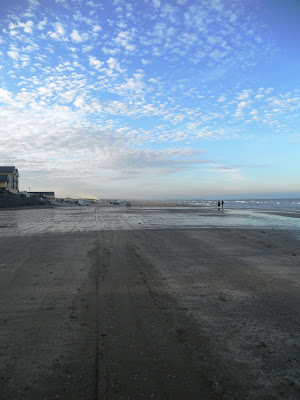 Posted by Patrick Comerford at 21:59 No comments: