Two swans and a lone heron on the River Dodder 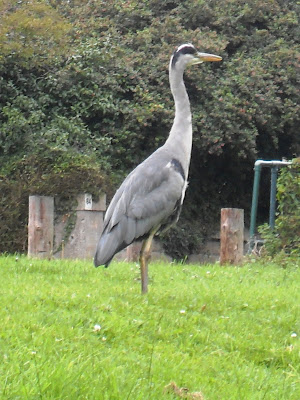 A lone heron on the grassy mound above the River Dodder in Rathfarnham this afternoon (Photograph: Patrick Comerford, 2011)

For the first time since I returned from Greece and Turkey, there was some warm sunshine this morning, and I even caught a glimpse at times of blue skies, even if they were hidden in large part by grey clouds.

Most of the morning was taken up with a meeting of the directors of USPG Ireland. Afterwards I went for a sandwich a double espresso in Spoon Café on Terenure Road North, where I had enough table space to spread out The Guardian and indulge in a thorough read of its reports on yesterdays Parliamentary Committee hearings on the Murdochs and the News of the World fiasco.

I walked back to work along Rathfarnham Road, past the house I was horn in opposite the former Classic Cinema, past the synagogue and past a house I lived in once as a child.

From the bridge over the Dodder at Rathfarnham, the river looked like glass, with its sharp reflection of the overhanging trees and growth. Just before the weir, two swans swam down from the bridge, elegant and graceful in their composure.

Two swans-a-swimming close to the weir on the River Dodder in Rathfarnham this afternoon (Photograph: Patrick Comerford, 2011)

All along the river, fish were jumping at the flies, and a small bird hopped along the path before me.

Halfway along the riverbank, a large part of a tree had fallen across the path. I wondered whether to turn back or try to be nimble – stepping over it brought an expected reward: there was a scuffling sound on the path ahead of me before I realised what had happened; I turned to glance up at the open grassy area above my shoulder, and there was a lone heron, watching all below him, waiting patiently, now on one leg, now on both legs, totally unperturbed by the passage of people below as they walked along the river bank.

The Triumphal Arch close to the banks of the on the River Dodder at Rathfarnham has already fallen victim to graffiti vandals, only months after its cleaning and renovation (Photograph: Patrick Comerford, 2011)

Up at the Triumphal Arch, which has been cleaned and renovated in recent months, I was disappointed to see that this monument to the Loftus family of Rathfarnham Castle, once neglected and in danger of crumbling, is already falling victim to graffiti vandals.

With fallen trees, graffiti on our historical, architectural legacy, and a rich wildlife, this is a unique area in need of more careful attention from South Dublin County Council so that it can remain the rich resource it is for generations to come.
Posted by Patrick Comerford at 19:55 1 comment: