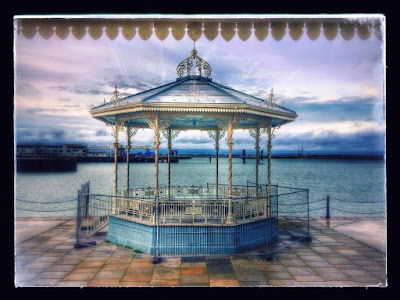 A bandstand on the East Pier, Dun Laoghaire … the General Synod of the Church of Ireland is meeting in Dun Laoghaire for three days (Photograph: Patrick Comerford, 2016)

I am in Dun Laoghaire this morning [12 May 2016] for the opening of the General Synod of the Church of Ireland which is meeting for three days in the Royal Marine Hotel, Dun Laoghaire.

During my time as a member of the General Synod, we have met in a variety of locations throughout Ireland, including Armagh, Belfast, Dublin (Christ Church Cathedral, the RDS Ballsbridge and Stllorgan), Galway and Kilkenny. But this is the first time we have met in Dun Laoghaire.

In addition to the two major reports, from the Standing Committee and the Representative Church Body, the Synod is also considering issues relating to liturgy, mission and ministry, human sexuality, Anglican, ecumenical and interfaith relations, and the covenant with the Methodist Church.

The Synod Eucharist is being celebrated at 10 am this morning in Saint Paul’s Church, Glenageary, where the preacher is the Right Revd Patrick Rooke, Bishop of Tuam, Killala and Achonry.

The Synod is due to begin in the conference centre at the Royal Marine Hotel at 12 noon with the Archbishop of Armagh’s Presidential Address, and begins at 10 am on Friday and Saturday.

Each morning, the Synod begins with a short act of worship, which is being led this year by the Right Revd Kenneth Kearon, Bishop of Limerick and Killaloe.

I am going to miss the meeting of General Synod tomorrow [Friday], which begins with the Council for Mission hosting a Mission Breakfast in Christ Church Parochial Hall, Dun Laoghaire, when the speaker is Ms Lydia Monds, Education Adviser to the Bishops’ Appeal.

At lunchtime tomorrow, in the Methodist Church, Northumberland Road, Changing Attitude Ireland is hosting a meeting at which the speaker is Jayne Ozanne. She is a member of the General Synod of the Church of England, and has been modelling “good disagreement” between those who differ on issues of human sexuality. Friday’s Synod day ends with a concert of choral and organ music in Saint Paul’s Church, Glenageary, at 7.30 pm.

General Synod members were expecting that the “big issue” this year would be the recommendations of the Commission on Episcopal Ministry and Structures which suggested changes in the method of electing bishops and alterations to diocesan boundaries. This proposal would have reduced the number of bishops and dioceses, in due course, from 12 to 11.

However, the Commission announced last week [5 May 2016] that it intends to withdraw this Bill to alter provincial and diocesan boundaries.

The Bill proposed a union between the dioceses of Tuam and Killala and Limerick and Killaloe, with Achonry joining with Kilmore, Elphin and Ardagh, and six parish units being moved from Dublin and Glendalough to Meath and Kildare. No boundary changes were to come into effect until after the General Synod meeting in 2017.

Alongside this Bill, the commission is making recommendations on episcopal election procedures in a separate Bill.

Announcing the withdrawal of the Bill on redrawing diocesan boundaries, a statement said: “After much heart-searching and consideration of all the implications … it is our judgment that the time, the circumstances and the atmosphere are not right for this to be presented and discussed as we envisaged. It is not in the best interests of the church to have divisive and acrimonious debate and it has never been our wish to engage in confrontational argument, attacking and defending, ‘winners’ on one side and ‘losers’ on the other.”

The commission members now hope to put forward a Motion “encouraging those most likely to be directly involved to work together in considering how these proposals could be taken forward by agreement in their respective dioceses for their mutual benefit and to meet the needs of the wider church.” The outcome of these deliberations would be reported to the General Synod next year [2017].

One of my tasks at General Synod again this year is to act as one of the hosts for our ecumenical guests, and I have also been asked to contribute to the reports of General Synod debates in the Church of Ireland Gazette. 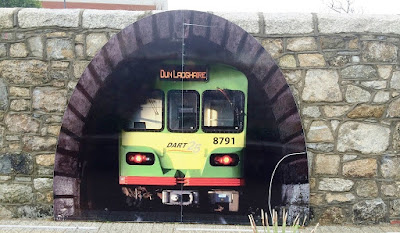 A mural by the railway lines in Dun Laoghaire (Photograph: Patrick Comerford, 2016)