Finding the former parish church
above the beach in Ballybunion 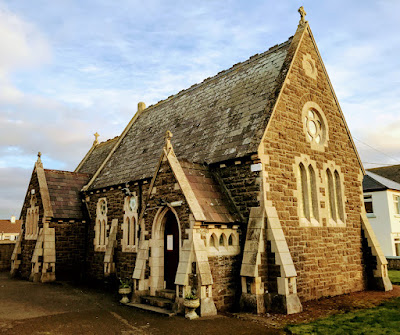 I am beginning to realise how large my parish is, and how expansive and extensive it is.

On Saturday afternoon [19 February 2017], after a work party had finished a heavy day’s work on repairing the boundary wall at the rectory, two of us set out from Askeaton for Ballybunion, hoping to catch the sunset.

The Rathkeale and Kilnaughtin Group of Parishes embraces most of west Co Limerick and north Co Kerry. The road took us along the southern shores of the Shannon Estuary, through Foynes, Glin, Tarbert and Ballylongford, and on to Ballybunion on the west coast of Kerry. It was a journey of 60 km, and had we gone further I would still have been in my parish.

In the late afternoon sunshine, we enjoyed a stroll along the cliffs of Ballybunion, by the caves and along the beach. Despite the high waves and sharp temperatures at the end of winter and the beginning of spring, young people were enjoying a splash and a swim, some were surfboarding, and one sea angler was out in the waves and the water.

After climbing up the cliffs, and inspecting the ruins of Ballybunion Castle, we strolled through the town, imagining how it must be alive and abuzz at the height of the summer season.

Walking on the beach in Ballybunion, Co Kerry, on Saturday afternoon (Photograph: Patrick Comerford, 2017; click on image for full-screen view)

At the corner of Sandhill Road, we stopped to admire Ballybunion Library, a building that was once Saint Augustine’s parish church in the Church of Ireland. The library was built as a single-storey Gothic Revival style church. The walls are of snecked limestone with Portland stone dressings. The entrance is through a projecting porch.

From 1669 to 1882, the parish of or Ballybunion was held by the Rectors of Aghavillan. Killehenny Church was built as the parish church in Ballybunion on a site donated by HB Harene, close to the cliffs, and was consecrated in 1858.

In 1883, the parish was united with Rattoo, and the first rector of the new union was the Revd Cecil Richard Hoggins, a former naval chaplain. Hoggins was succeeded by the Revd Charles Edward Fry. Later, it was recalled, ‘the rector suffered terribly from shyness. His manner was painfully nervous.’

Meanwhile, another Church of Ireland church in the neighbourhood had fallen into disuse. Saint Augustine’s Church was originally built at Rattoo, near Ballyduff, in 1877-1879 on a site ‘within the shadow of the ancient round tower.’ It was built by Wilson Gun for his family, friends, tenants and workers, and for the Staughton family, who were neighbouring landlords.

The church was designed by the Kerry-born architect, James Franklin Fuller (1835-1924), an eccentric snob who also wrote high-Victorian melodramatic novels. He claimed to have ‘carried out professional work in every county in Ireland’ and the Dictionary of Irish Architects lists over 200 of his works.

When the old church in Ballybunion was demolished, Saint Augustine’s was dismantled stone-by-stone by local builders Boyle and Harnett. The work involved numbering, cleaning and polishing each stone as the building was transported and reconstructed in its exact original state on the present site in Sandhill Road, Ballybunion.

The Church of Ireland community in Ballybunion was strong until the end of the 1980s, and the decision was taken to close Saint Augustine’s in 1987. The church was deconsecrated on 1 June 1987, almost 30 years after it had stood on this site. 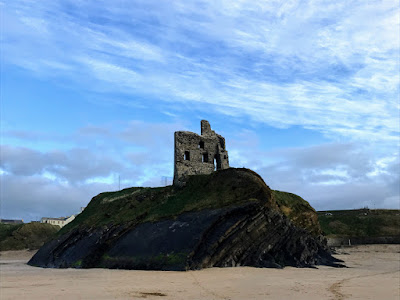 The ruins of Ballybunion Castle above the beach in Ballybunion, Co Kerry (Photograph: Patrick Comerford, 2017)