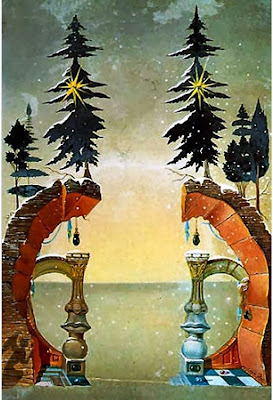 My choice of a work of art for an Advent meditation this morning is ‘Christmas (Noel), 1946,’ by the Spanish surrealist Salvador Dalí.

Dalí was a skilled draughtsman, best known for the striking and bizarre images in his surrealist work. Dalí was strongly influenced by Freud and Einstein and was obsessed with science, psychology, and math. He was a major inspiration from many modern artists, including Damien Hirst.

Dalí’s best-known work is The Persistence of Memory (1931). But his work also included film, sculpture and photography.

Dalí was highly imaginative, and enjoyed indulging in unusual, grandiose behaviour. He declared his “love of everything that is gilded and excessive, my passion for luxury and my love of oriental clothes.” His eccentric manner sometimes attracted more attention than his art.

Dalí fled Spain during the Civil War (1936-1939), and refused to align himself with any group. Although he had prospered in France during the years that followed, he fled France at the outbreak of World War II.

George Orwell accused Dalí of “scuttling off like a rat as soon as France is in danger.” In a review of Dalí’s autobiography in 1944, Orwell wrote: “One ought to be able to hold in one’s head simultaneously the two facts that Dalí is a good draughtsman and a disgusting human being.”

After World War II, Dalí returned to Catalonia and moved closer to the Franco regime, congratulating Franco for “clearing Spain of destructive forces” and praising him for signing death warrants for prisoners.

Dalí also returned to the Roman Catholic faith and became increasingly religious as he got older. He died in 1989.

For over 20 years, Dalí produced dozens of greeting cards for the German pharmaceutical company Hoechst, which sent his Christmas Cards to doctors and pharmaceutical representatives in Spain.

This morning’s work is one of Dali’s Christmas cards, dating from 1946, and provides the surrealist expression of waiting for Christmas.

We see a winter scene adorned with the traditional Christmas trees. One of the interesting things about this work is the space in the middle. Dalí is known for his use of space, particularly negative space. Here we see an empty space flanked by two arched structures. There is an empty space to be filled.

Where does this gap lead to? It opens to nothing, just vast empty land. Is this an Advent space, waiting to be filled by the arrival of Christ?

Tomorrow: ‘Madonna of the Village,’ by Marc Chagall.