Today’s edition of the Church of Ireland Gazette [24 May 2013] carries the following half-page news report and photograph on the back page (p. 16): 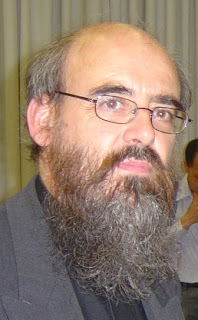 Addressing the recent annual general meeting of the Irish Campaign for Nuclear Disarmament (Irish CND) in the Mansion House, Dublin – following his re-election as the organisation’s President – Canon Patrick Comerford said it was “an honour that I would prefer there was no need for and this is a campaign that I hope … can work its way out of existence.”

Otherwise, Canon Comerford, who lectures in Anglicanism and Liturgy in the Church of Ireland Theological Institute, Dublin, feared that “the consequence may be that the whole of humanity has worked its way out of existence.”

He referred to a Civil Society Forum hosted earlier this year by the International Campaign to Abolish Nuclear Weapons – and attended by representatives of Irish CND – to draw attention to the impact of the use of nuclear weapons and encourage all states to begin work on outlawing them.

Participants had presented findings on the environmental, developmental and health consequences of nuclear detonations and concluded that “no international response plan could effectively be put in place to respond to such an event … any attempt to respond would be futile … prevention is the only option.”

Canon Comerford also referred to an international conference on the humanitarian impact of nuclear weapons which the Norwegian Government had hosted in March.

He said that the conference had marked “a new beginning towards the elimination of nuclear weapons … the first time states have come together to consider the humanitarian effects of nuclear weapons, to confront the horror of these weapons and to realise they must take responsibility for putting in place an international ban that is long overdue.”

The Irish CND President denounced “nations [which] still consider it their prerogative to possess these ghastly weapons, each capable of obliterating many thousands of innocent civilians, including children, in a flash,” mentioning in particular the US, Russia, Britain, France, China and Israel.

He continued by asserting: “Let us work for the imaginable – the abolition of nuclear weapons. It is not only a moral imperative, it is the moral imperative of our age.”