Wisdom: the town crier with good news on Trinity Sunday 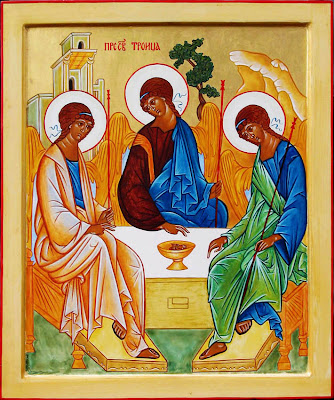 In our Bible studies in this tutorial group, we have been looking at the Old Testament lectionary reading for the Sunday of the following week. Tomorrow [19 May 2013] is the Day of Pentecost, and the following Sunday [26 May 2013] is Trinity Sunday.

1 Does not wisdom call,
and does not understanding raise her voice?
2 On the heights, beside the way,
at the crossroads she takes her stand;
3 beside the gates in front of the town,
at the entrance of the portals she cries out:
4 ‘To you, O people, I call,
and my cry is to all that live.

22 The Lord created me at the beginning of his work,
the first of his acts of long ago.
23 Ages ago I was set up,
at the first, before the beginning of the earth.
24 When there were no depths I was brought forth,
when there were no springs abounding with water.
25 Before the mountains had been shaped,
before the hills, I was brought forth –
26 when he had not yet made earth and fields,
or the world’s first bits of soil.
27 When he established the heavens, I was there,
when he drew a circle on the face of the deep,
28 when he made firm the skies above,
when he established the fountains of the deep,
29 when he assigned to the sea its limit
so that the waters might not transgress his command,
when he marked out the foundations of the earth,
30 then I was beside him, like a master worker;
and I was daily his delight,
rejoicing before him always,
31 rejoicing in his inhabited world
and delighting in the human race. 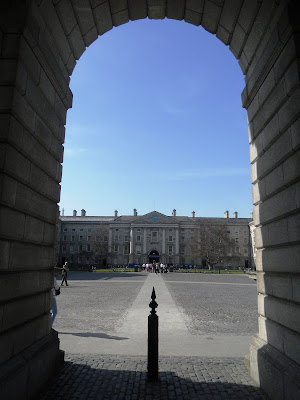 Although Trinity Sunday is one of my favourite Sundays in the liturgical year, I am aware that many clergy are reluctant to preach on this Sunday for fear of heresy.

The difficulties of preparing for this Sunday are compounded because this is the only festival in the church year that celebrates a doctrine rather than an event or a person.

Heavy on the celebrations, light on the explanations – would it work better?

But first, a few explanations.

Interestingly, Trinity Sunday is a very Anglican day too: Thomas Becket (1118–1170) was consecrated Archbishop of Canterbury on the Sunday after Pentecost, and his first act was to ordain that the day of his consecration should be held as a new festival in honour of the Holy Trinity. This observance then spread from Canterbury throughout the Western Church.

Looking at the text:

Wisdom cries out “beside the way … at the crossroads … beside the gates in … the town, at the entrance …” Toby jugs in the image of town criers in a front window in Beacon Street, Lichfield (Photograph: Patrick Comerford, 2013)

Lichfield has a traditional town crier. Ken Knowles, a retired teacher, dresses in the traditional town-crier’s red frock coat and tricorn hat, and goes around the town centre ringing his bell to proclaim the great news of the day. Why, he even has a row of Toby jugs, all dressed like town criers, in the front window of his house in Beacon Street.

The beginning of our Old Testament reading provides me with an instant image of a town crier calling out aloud at the gates and through the streets of the city, but in this case proclaiming the God news of God’s creation, and the role of the Holy Spirit in that creation.

This Old Testament reading gives us part or all of three stanzas of a seven-stanza poem in which Wisdom is personified as a woman.

Verses 1-5 are the first stanza, and verses 22-31are the fifth and sixth stanza.

Wisdom “cries out” (verse 3) to “all that live” (verse 4), to all people everywhere. But her message is primarily to young people.

Verses 22-31 tell of Wisdom’s relationship to creation. God created her at the beginning of his work, as “the first of his acts,” “before the beginning of the earth” (verse 23), before he created the depths (verse 24).

She was “brought forth” (verse 24). The Hebrew word here presents an image of birth, as in begot or formed.

In verses 24-26, Canaanite mythological motifs, such as “depths”, “springs”, shaping the “mountains,” are drawn on to say that Wisdom existed before creation began.

Verse 27 tells us that Wisdom pre-exists the world. She was present at creation, as a witness.

Wisdom came to know God’s secrets in creating the heavens and the earth, as in limiting the extent of the sea (verse 29).

She was “beside him” at the time of creation (verse 30). Later authors, including the authors of Sirach and Wisdom, show that Wisdom had an active role in creation.

Wisdom was either was “like a master worker” (verse 30), a craftsperson, in creative acts, or the Hebrew can mean little child. This notion which fits well with “brought forth” (see verses 24 and 25) and with the rest of verse 30, where Wisdom is God’s “daily … delight” and she delights in God’s creation of humanity (verse 31).

In other words, Wisdom rejoices both in God and in those created by God.

When later trans-culturated into the Greek world, Wisdom becomes the logos, the pre-existent divine Word: “In the beginning was the Word, and the Word was with God, and the Word was God”; he “became flesh and lived among us” (John 1: 1, 14). However, in this case I relate the images of Wisdom in Creation to the opening of the creation account in Genesis 1, where the Spirit of God hovers over formless void and darkness (Genesis 1: 2; cf John 1: 32).

Psalm 8 provides a picture in which God is praised for his glory (verses 1a and 9), reflected in his creation. God fashions creation, and is greater than all creation. Once again we have images of infants and children (verse 2). God is also a craftsman (compare “the work of your fingers” in verse 4 with the master craftsman or worker in Proverbs 8: 30). This psalm recalls the first creation story. God has given us a share in his power by conferring on us authority over the rest of all that he has created.

Our Epistle reading is one of the great and succinct Trinitarian passages in the New Testament. In Romans 5: 1-5, the Apostle Paul writes that union with God comes through faith, and Christ is our entry point to God’s grace (verse 1). We are not going to be disappointed, for God has given us the Holy Spirit, who is given to us, and who continually pours God’s love into our hearts (verse 5).

The Gospel reading (John 16: 12-15) is a natural continuation from the Gospel reading for tomorrow (19 May 2013, The Day of Pentecost, John 14: 8-17). In this Gospel reading, once again we have a succinct Trinitarian passage. We are at that moment after the Last Supper when Christ promises the disciples that the “Spirit of truth” is coming (verse 13). The Spirit will guide them into all truth giving glory to Christ (verse 14), and they will receive all this from the Father (verse 15).

Have you reluctance to preach on Trinity Sunday?

Do you find a difficulty in shifting from an approach of explanation to one of celebration?

How does a Trinitarian approach change your understanding of this passage?

How do you understand the περιχώρησις (perichoresis) of the Trinity?

Are you comfortable with or challenged by feminine images of God in the Bible?

Do you have a Trinitarian understanding of the creation account in Genesis 1?

Have you made a connection between this understanding and the Gospel accounts of the Baptism of Christ?

Almighty God,
may we who have received this Holy Communion,
worship you with lips and lives
proclaiming your majesty
and finally see you in your eternal glory:
Holy and Eternal Trinity,
one God, now and for ever.

Canon Patrick Comerford is Lecturer in Anglicanism, Liturgy and Church History, the Church of Ireland Theological Institute, and an Adjunct Assistant Professor, Trinity College Dublin. These notes were prepared for a Bible study in a tutorial group with MTh students on 18 May 2013.