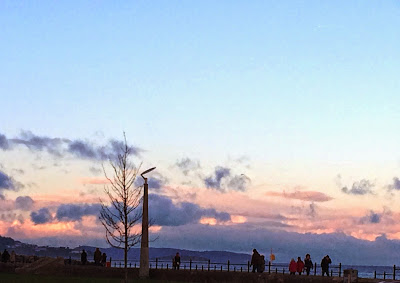 Pink lights in the white clouds beyond Bray this afternoon (Photograph: Patrick Comerford, 2014)

After Christmas Day and Saint Stephen’s Day, it seems everyone needs to get out of the house, go for a walk and clear their heads.

After dinner on Christmas Day, I was quite tired, and sat up to watch the most talked-of movie of the season, The Interview. Saint Stephen’s Day was more relaxed, with opportunities to catch up on the Christmas editions of East Enders and Downton Abbey. I even began watching the box set of House of Cards.

But today was a day for clearing the head and getting a little fresh air, and two of us drove out to Bray. Thirty years ago, Bray, in north Co Wicklow, was quite a distance away. But now the M50 ring road around Dublin means Bray is only 20 minutes away from where I live on a day like today.

For a few years, I edited the front page of the Bray People when I worked with the People Group of local newspapers based in Wexford. A generation before that, my parents moved to Bray and lived there for a short time immediately after they married.

But today I like Bray for some of my own reasons.

Although the beach at Bray is pebbly without much remaining sand, Bray is a good location for beach walks, with views to the south of Bray Head and the foothills of the Wicklow Mountains, and to the north of the Dalkey Islands and Dublin Bay.

Bray can be run-down in many places, but it has its own unique character that means it can never be mistaken for another suburb of Dublin.

Even though the old Town Hall has been inexplicably handed over to McDonalds, there is some elegant Victorian and Edwardian architecture in the town that rivals any to be found in English and Welsh seaside resorts, thanks to the patronage of the Brabazon family of Kilruddery House, Earls of Meath.

And Bray seems to have its own colony of Italian families, to the second or even third generation, which means it has a generous number of genuine Italian cafés and restaurants. 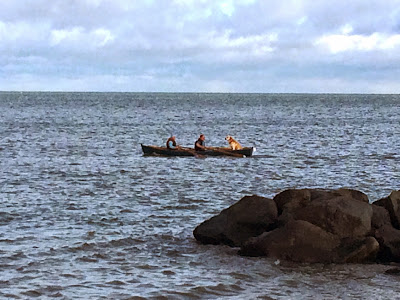 Two men and a dog in a boat rowing parallel with the shoreline in Bray this afternoon (Photograph: Patrick Comerford, 2014)

This afternoon, two of us went for a walk on the pebbly shoreline on the beach in Bray, and in the late winter afternoon delighted in the white, snow-filled clouds on the horizons. Thankfully, the clouds have not broken in this part of Ireland, and we have not been hit by the snow that has blanketed parts of England during the past few days.

Once again, parallel to the shoreline, the two men and a dog I had seen in a boat at the beginning of November were enjoying the journey between Bray Head and the marina. They came had come from Bray Head and were rowing parallel with the full length of the beach, with the men working hard as the rowed persistently and consistently, while the dog was enjoying himself, wagging as his tail as he watched the waves roll and break against the shoreline.

And once again, all three, those two men and the dog, seemed oblivious to the number of people enjoying their post-Christmas walk on the beach and along the Promenade. 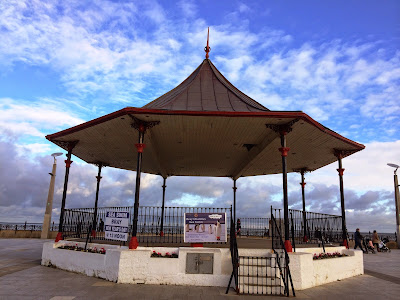 Throwing down the gauntlet ... signs along the Promenade are inviting swimmers to join the Bray Charities Sea Swim on New Year’s Day Swim (Photograph: Patrick Comerford, 2014)

All along the Promenade, signs are inviting participants to join the Bray Charities Sea Swim at noon on New Year’s Day. Now, that’s a challenge.

Carpe Diem … a taste of Sardinia and Florence at the end of December (Photograph: Patrick Comerford, 2014)

After walking the full-length of the Promenade, we returned for coffee in Carpe Diem on Albert Avenue, close to the corner with Strand Road and across the street from the Promenade and Sealife.

We each had a Piadina, a traditional, thin Italian flatbread, filled with goat’s cheese, spinach and roasted peppers, and two great double espressos. The café also offers great Italian wines by the glass, and I had a glass of Vermentino, a dry white wine unique to Sardinia.

Outside, a man was parking a carefully nourished and cherished care dating back to 1958. But a more wondrous sight was the way those snow-filled white clouds over the Dalkey Islands were catching the pink lights from the setting sun to the west. There was a bright crescent moon in the blue sky to the south.

Carpe Diem … we had seized the day. 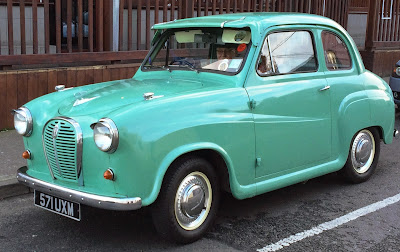 Carols and Hymns for Christmas (3): ‘A Hymn for
Christmas and Saint John’s Day’, by John Alcock 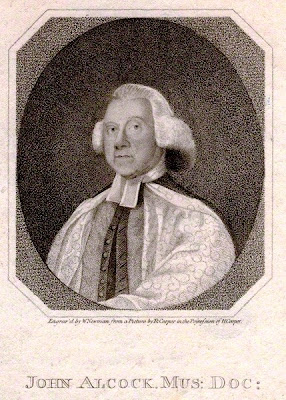 As part of my spiritual reflections for this Christmas season, I am thinking about an appropriate carol or hymn each morning. Today, in the Calendar of the Church, we remember Saint John the Evangelist, and so this morning [27 December 2014] I have chosen a little-known but recently rediscovered hymn, ‘A Hymn for Christmas and Saint John’s Day’, by John Alcock (1715-1806).

The organist and composer John Alcock was born almost 300 years ago in Crane Court, St Peter’s Hill, London, on 11 April 1715, the third of the eight children of Daniel and Mary Alcock, who lived close to Saint Paul’s Cathedral.

At the age of seven, John Alcock was admitted as a chorister in Saint Paul’s under Charles King. He was 12 when he sang at the coronation of George II in 1727. Alcock left the cathedral when his voice broke two years later and he was formally apprenticed to the blind organist John Stanley. Alcock deputised for Stanley at Saint Andrew’s Church, Holborn, and from 1734 at the Temple Church.

He married Margaret Beaumont (1711-1792) at All Hallows’ Church, London Wall, on 20 May 1737, and soon after they moved to Plymouth when he was appointed organist of Saint Andrew’s Church.

In January 1742, Alcock moved to Saint Laurence’s Church, Reading. He played the organ at the politically charged opening of the Radcliffe Camera at Oxford in April 1749. 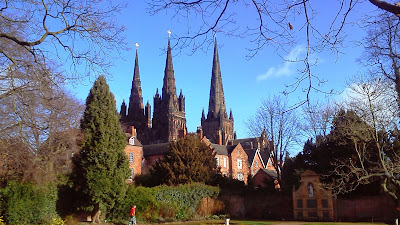 Lichfield Cathedral ... in 1750, John Alcock was installed as a vicar-choral and shortly afterwards was appointed Organist and Master of the Choristers (Photograph: Patrick Comerford, 2014)

He next moved to Lichfield, where on 22 January 1750 he was installed as a vicar-choral of Lichfield Cathedral and shortly afterwards was appointed Organist and Master of the Choristers of the cathedral.

When he arrived in Lichfield, Alcock found the music in the cathedral was at a very low ebb. He came with great intentions to improve the quality of the musical performances in the cathedra. However, the other vicars choral saw him as a pedantic perfectionist, while he saw them as unruly choristers and self-interested vicars and accused them of gross absences.

In Lichfield, Alcock was a Tory supporter, as shown in the poll books in the 1753, 1754, 1755, and 1761 Lichfield elections. This may have added to his difficulties for there was strong support for the Whigs at the cathedral.

He was dismissive of the state of the choir and the music in Lichfield Cathedral, and said so later in the essays he wrote as prefaces to several volumes of church music and in a semi-autobiographical novel, The Life of Miss Fanny Brown (1761), written under the pseudonym John Piper.

By 1753, the situation between Alcock and the other vicars had grown sufficiently to be mentioned in the Chapter Acts books. These differences came to a head in 1758 when the men of the choir asked the dean and chapter to admonish Alcock for his behaviour. They accused him of “Splenetic Tricks upon the Organ to expose or confound the Performers, or burlesque their Manner of Singing.” 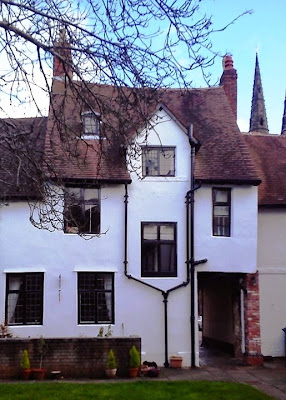 In the end, Alcock got the better of the men of the choir. He rescinded his position as Master of the Boys in August 1758. In 1760, he was formally admonished, and he duly resigned his post of cathedral organist and master of the choristers. But he forfeited only £4 a year, and managed to hold on to his freehold position as a vicar-choral and to the house in the Cathedral Close that went with that appointment, No 11 Vicars’ Close in Lichfield.

Meanwhile, despite these personal conflicts in Lichfield, Alcock gained the degree B.Mus. at Oxford in June 1755, and later he would receive a doctorate in 1766.

Around this time, Alcock found a wealthy patron in Arthur Chichester (1739-1799), 5th Earl and 1st Marquess of Donegall, who appointed him his private organist. In 1789, Lord Donegall inherited Fisherwick Manor, between Lichfield and Tamworth, along with vast Irish estates of more than a quarter million acres in Belfast, Antrim, Donegal and Wexford. In 1789, he bought the Manors of Comberford and Wigginton in Staffordshire, including lands in Hopwas and Coton, and he rebuilt Comberford Hall in the 1790s.

The Donegalls gave their name to Donegall House in Bore Street, Lichfield, and generations of the family were buried in a vault in Saint Michael’s Church, Lichfield.

Alcock’s most important volume of church music is his Six and Twenty Select Anthems (1771). He was also an ardent antiquary and collector of manuscripts. In 1752 he proposed the quarterly publication in score of various services by great English composers, including Tallis, Byrd, and Gibbons. But when he learned that Maurice Greene was working on a similar project, Alcock generously handed over his own research.

He wrote 72 original psalm tunes, a number of hymns and simple hymn anthems, and reharmonised 117 psalm tunes which were published in three collections.

From 1773 until his death in March 1791, he was the organist of Saint Matthew's Church in Walsall. His youngest brother, William Alcock (1756-1833), was the organist in Newcastle under Lyme.

After his death, John Alcock’s memory and music were soon forgotten. But a considerable range of his service music remanis in manuscript form in Lichfield Cathedral. 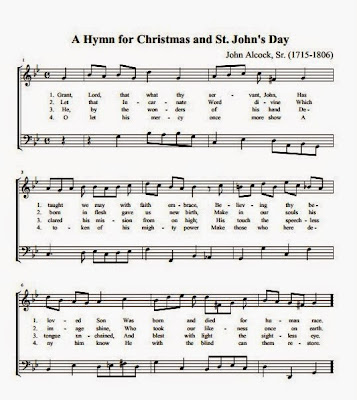 A Hymn for Christmas and Saint John’s Day, by John Alcock

Grant, Lord, that what thy servant, John,
Has taught we may with faith embrace,
Believing thy belovéd Son
Was born and died for human race.

Let that Incarnate Word divine
Which born in flesh gave us new birth,
Make in our souls his image shine,
Who took our like - ness once on earth.

He, by the wonders of his hand
Declared his mission from on high;
His touch the speechless tongue unchained,
And blest with light the sightless eye.

O let his mercy once more show
A token of his mighty power
Make those who here deny him know
He with the blind can them restore.

Tomorrow:: ‘Unto us is born a Son’