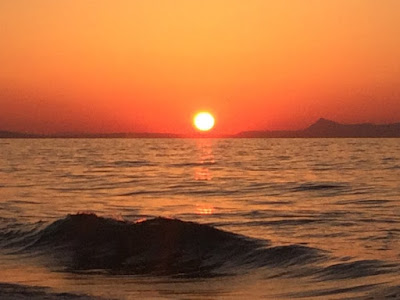 Watching the sun set at the beach in Rethymnon on Sunday evening (Photograph: Patrick Comerford, 2016)

It is only a three or four minute walk from Julia Apartments in the middle of Platanes to the long sandy of beach that stretches for mile after mile from nearby Rethymnon.

It is a real pleasure to have such an expanse of sandy beach so near, with its clear blue and turquoise Mediterranean waters and light, white sand. It is a family-friendly beach, but is also friendly to the caretta caretta or loggerhead sea turtles, whose protected hatching nests are clearly marked out.

In the evenings, I can stand for what seems like an unending time watching the sun setting beyond the Fortezza in Rethymnon in what I imagine is Souda Bay or Chania to the west. Sometimes it sits there like a large red balloon, halting for a while in the orange, yellow and purple hues of the sky, before suddenly dropping behind the sharp-shaped mountain edges.

For much of last week, however, the high tides and the new moon that has come with a strong gravitational pull in the week after midsummer, have seen red flags flying from lifeguard stations along the beach.

This afternoon, although there was no red flag warning, the waves were fearsome, and any potential swimmer had only to step out a little to realise that sands underfoot were shifting with the undercurrents, and once past the shelf in the sand the waves were taller than adult-height.

I saw hale and fit men, standing in water only a few feet from the shoreline, being felled by the tall waves this afternoon. 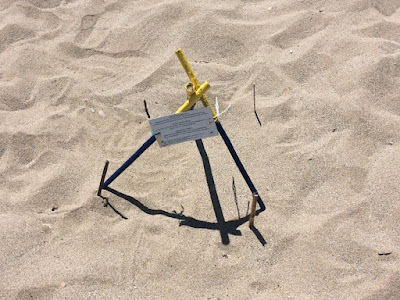 The protected hatching nests of the caretta caretta or loggerhead sea turtles are clearly marked out in Rethymnon (Photograph: Patrick Comerford, 2016)

In northern Europe, we normally associate waves such as this with winter storms or with the strong tides created at the spring and autumn equinox. But there is also a high risk when the moon is either full or new and this is combined with the gravitational pull of the moon and sun are combined. At these times, the high tides are very high and the low tides are very low.

About three or four times a year, the new or full moon coincides closely in time with the perigee of the moon – the point when the moon is closest to the earth. These occurrences are often called ‘perigean spring tides,’ although they occur in every season of the year and not just in spring.

There was a new moon just a week ago [4 July], and this helps to explain the high, strong waves of the past week. The sea has inspired poets throughout the generations, and the English romantic poet John Keats, after an exhausting voyage to Naples, decided to use a sea image for his epitaph:

Here lies One Whose Name was writ in Water.

When Keats died in Rome a year later, these words were written on his gravestone.

At the weekend, I was told of a 55-year-old English man who has been living in Crete for some years drowned on Friday while he was swimming in Dramia near Kavros, between Rethymnon and Chania.

His wife and teenage sons were present, and this was a cautious man who never went out beyond his depth. He was a daily swimmer who knew these waters well. It is beautiful area and close to some of the locations used in filming Zorba the Greek over 50 years ago.

According to eye witnesses quoted in local media reports, he was caught in an undercurrent. He tried to swim towards the beach but was prevented by the wind and currents. The coastguard arrived after an emergency call and pulled the man out of the water. He was taken by ambulance to Rethymnon Hospital, but was pronounced dead on arrival.

Last Tuesday, another man drowned in Kissamos. These latest deaths bring the number of deaths in Cretan waters to 15 so far this season.

Swimmers are advised to take care when in the sea, to watch out for the red danger flags and not to go swimming without telling someone or immediately after a meal or after drinking alcohol. Even experienced swimmers can get into difficulties.

A 58-year-old tourist from the United States drowned recently in the sea at Elounda in eastern Crete. Other swimmers took him out of the water and he was transferred by ambulance to hospital, but was pronounced dead on arrival.

At the end of last month [June 2016], a 66-year-old tourist from France drowned at the sea in the resort of Gouves, near Iraklion. He had been with a 90-year-old man on the beach when he went swimming. Other swimmers called the coastguard, but he was dead by the time his body was recovered. It was the second incident in Heraklion within a week.

A day or two earlier, a 70-year-old woman from Switzerland drowned while she was swimming in the sea area of Korfalonas near Kissamos.

The sea is beautiful and especially inviting in this warm summer weather. But I realise my own weaknesses when it comes to swimming in the sea, and stayed by the shoreline this afternoon, admiring the waves yet wondering whether others younger and stronger than me were being foolhardy. 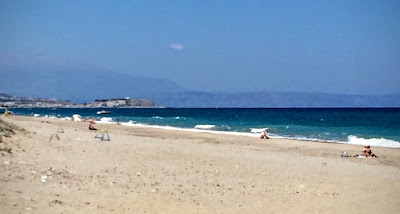 The white sandy beaches stretch for mile after mile east of Rethymnon along the shoreline at Platanes (Photograph: Patrick Comerford, 2016)

And at one stage this afternoon, I found myself humming the song Sto perigiali to kryfo, a Greek song that translates as The hidden seashore in English. The song, also known as Arnisi (Άρνηση, ‘Denial,’ ‘Refusal’ or ‘Renunciation’), is one of the best-known songs composed by Mikis Theodorakis.

The poem was written by the poet Giorgos Seferis (1900-1971), and refers to a small beach in Konnos Cyprus. It was written by Seferis while he was the Greek Ambassador in Cyprus. Seferis was the most distinguished Greek poet of the 1930s, and won the Nobel Prize for Literature in 1963.

In this poem, Seferis combines the language of everyday speech with traditional poetic forms and rhythms. The recurrent theme is exile and nostalgia for the Mediterranean and freedom of speech and life.

It was written in 1931 and was set to music by the Theodorakis in 1960. It was recorded by Grigoris Bithikotsis in 1962 and became enormously popular in Greece. Since then it has been recorded by many singers, most notably Maria Farantouri.

After the colonels seized power in Greece in 1967, Seferis went into voluntary seclusion and many of his poems were banned, including the settings and arrangements by Theodorakis.

Sto perigiali to kryfo or Arnisi became the anthem of resistance to the regime and was sung by the enormous crowds lining the streets at Seferis’s funeral in 1971.

Posted by Patrick Comerford at 16:46 No comments:

‘Let the clever ones learn Latin as
an honour, and Greek as a treat’

‘Let the clever ones learn … Greek as a treat’ – children’s comics in a supermarket in Rethymnon (Photograph: Patrick Comerford, 2016)

For my daily Lenten meditations each morning during Lent this year [2016], I reflected on words of wisdom from Samuel Johnson (1709-1784), the Lichfield lexicographer and writer who compiled the first authoritative English-language dictionary.

Although Johnson never visited Greece, he was fluent in classical and New Testament Greek, and during this time back in Greece, I wondered just how fluent in Greek he was.

Although Johnson left Oxford without a degree, before returning to Lichfield he used his brief time as an undergraduate at Pembroke College to learn French while working on his Greek. He may not have been a first-rate Greek scholar, but he knew more Greek than most, and when he opened his new school at Edial, near Lichfield, he advertised himself in 1736 as a teacher of Latin and Greek.

Johnson is well-known for having said “A man is in general better pleased when he has a good dinner upon his table, than when his wife talks Greek.” The words are ascribed to him by Sir John Hawkins in his Life of Samuel Johnson.

However, this remark is probably less indicative of a misogynistic attitude than it is of Johnson’s quirky and quick sense of humour. Indeed, he wrote favourably of how the 16th century Cambridge scholar Roger Ascham had come across Lady Jane Gray reading Plato’s Phædo in Greek.

He wrote wittily about people who knew Latin and pretended to know Greek:

I have read of a man, who being, by his ignorance of Greek, compelled to gratify his curiosity with the Latin printed on the opposite page, declared that from the rude simplicity of the lines literally rendered, he formed nobler ideas of the Homerick majesty than from the laboured elegance of polished versions.

With his greater reverence for Greek than Latin, Johnson said: “Greece appears to be the fountain of knowledge; Rome of elegance.” It was, perhaps, the attitude to the classics that had Winston Churchill declare later: “The cleverer boys … all went on to learn Latin and Greek and splendid things like that … I would let the clever ones learn Latin as an honour, and Greek as a treat.”

Hawkins, in his biography of Johnson, recalls how he suffered what may have been a sudden and severe stroke in 1783. When Johnson knelt to pray later, tried to repeat the Lord’s Prayer, “first in English, then in Latin, and afterwards in Greek.” But Hawkins was surprised that because of his stroke Johnson could only repeat the Lord's Prayer in Greek.

It was an indication of how deeply embedded his knowledge of Greek actually was. His diaries indicate he read a passage from the Bible in Greek each day, and in his will Johnson left collections of Greek poetry and a number of Greek Bibles. The manner of his bequests indicates that Johnson saw Latin as an honour, but Greek as a treat.

‘Greek as a treat’ … children’s comics in a supermarket in Rethymnon (Photograph: Patrick Comerford, 2016)