‘Open me, O heart of truth,
hollow out the stone …
I have no other hope’ 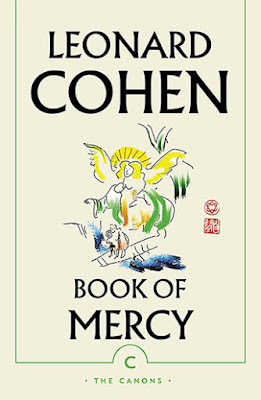 The New Year celebrations have passed, and in my Friday evening reflections I have turned again to some of the poems in Leonard Cohen’s Book of Mercy, one of the books I received as a present last week.

This book of psalms by Leonard Cohen is a personal and powerful collection. It was first published in 1984, and was republished 35 years later in 2019 by Canongate of Edinburgh. It is a slim volume of Cohen’s contemporary psalms, and it has been elegantly repackaged.

Like the psalms, the themes in the short poems in Book of Mercy include praise, despair, anger, doubt, trust and the search for the presence of God.

Constantly, Cohen speaks of God as ‘the Name’ – Hashem (השם‎) – is a title used in Judaism to refer to God without using God’s name. Rabbinic Judaism considers seven names of God so holy that, once written, they should not be erased, and restricts the use of the names of God to a liturgical context.

Speaking from the heart of the modern world, yet in tones that resonate with an older Jewish tradition, these verses give voice to the deepest and most powerful intuitions.

This Friday evening, I am reading one of these short poems (p 57), which is rooted in the traditions of Jewish spirituality, yet echoes many of the threads found in the spiritual writings of Saint Teresa of Avila and the poetry of John Donne:

I turned you to stone. You stepped outside the stone. I turned you to desire. You saw me touch myself. I turned you into a tradition. The tradition devoured its children. I turned you to loneliness, and it corrupted into a vehicle of power. I turned you into a silence which became a roar of accusation. If it be your will, accept the longing truth beneath this wild activity. Open me, O heart of truth, hollow out the stone, let your Bride fulfil this loneliness. I have no other hope, no other moves. This is my offering of incense. This is what I wish to burn, my darkness with no blemish, my ignorance with no flaw. Bind me to your will, bind me with these threads of sorrow, and gather me out of the afternoon where I have torn my soul on twenty monstrous altars, offering all things but myself.

With the Saints through Christmas (13):
7 January 2022, Saint John the Baptist

Saint John the Baptist in a fresco by the Cretan iconographer, Alexandra Kaouki, in Rethymnon

The Feast of the Epiphany was celebrated yesterday (6 January), and the Epiphany theme continues for the next few weeks, with Sunday’s Gospel reading telling the story of Christ’s baptism in the River Jordan by Saint John the Baptist.

Meanwhile, before this day gets busy, I am taking some time early this morning for prayer, reflection and reading.

This morning, I am reflecting on Saint John the Baptist and his role in the Epiphany stories.

Because Saint John’s main role in his life was played out on the day of Theophany or the Epiphany (6 January), the Orthodox Church from earliest times dedicated the day after the Epiphany to his memory.

Saint John the Baptist occupies a totally unique place by his roles in baptising Christ and in baptising people for repentance. Saint John prepared himself in the wilderness of the desert for 30 years for his great service by a strict life, by fasting, prayer and sympathy for the fate of God’s people.

Saint John was of such moral purity that, in truth, he could be called an angel or messenger as Holy Scripture. He appeared on the banks of the River Jordan, to prepare the people by his preaching to accept the Saviour of the world.

In church hymns, Saint John the Baptist is called a ‘bright morning star,’ whose gleaming outshone the brilliance of all the other stars, announcing the coming dawn of the day of grace, illumined with the light of the spiritual Sun, Jesus Christ.

Saint John differs from all other prophets especially in that he had that privilege of being able, with his hand, to show Christ to the world. Saint John bridges the history of the Biblical Prophets and the era of the New Testament, and bore witness to the Son of God, incarnate in the flesh, and he was a witness of the Theophany of the Trinity at Christ’s Baptism. 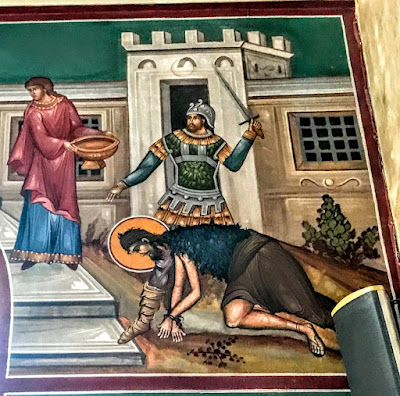 The execution of Saint John the Baptist, depicted in a fresco in a church in Georgioupioli in Crete (Photograph: Patrick Comerford)

15 ‘Land of Zebulun, land of Naphtali,
on the road by the sea, across the Jordan, Galilee of the Gentiles—
16 the people who sat in darkness
have seen a great light,
and for those who sat in the region and shadow of death
light has dawned.’

23 Jesus went throughout Galilee, teaching in their synagogues and proclaiming the good news of the kingdom and curing every disease and every sickness among the people. 24 So his fame spread throughout all Syria, and they brought to him all the sick, those who were afflicted with various diseases and pains, demoniacs, epileptics, and paralytics, and he cured them. 25 And great crowds followed him from Galilee, the Decapolis, Jerusalem, Judea, and from beyond the Jordan.

The prayer in the prayer diary of the Anglican mission agency USPG (United Society Partners in the Gospel) invites us to pray this morning (7 January 2022):

Let us pray for the National Missionary Society of India and the work they do in the fields of education and medicine. 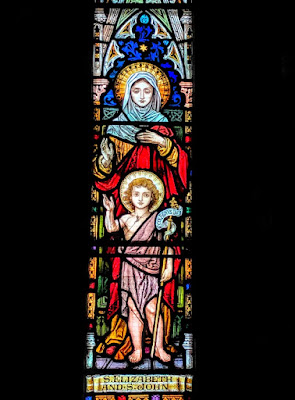