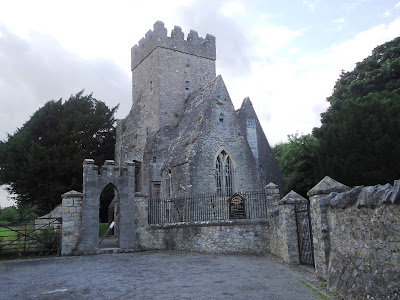 As part of the programme for Heritage Week, I am speaking in Saint Doulagh’s Church, Balgriffin, Co Dublin, at 8 pm tomorrow evening [Friday, 23 August 2013] on “Celtic Spirituality, Our Heritage.”

This evening [Thursday], Sister Una Agnew is exploring the spiritual implications of the poetry of Patrick Kavanagh. Last weekend, the church was open on Saturday and Sunday afternoon for guided tours, with visual displays and stories, and there was another afternoon of tours and stories in the church on Tuesday and yesterday [Wednesday]. 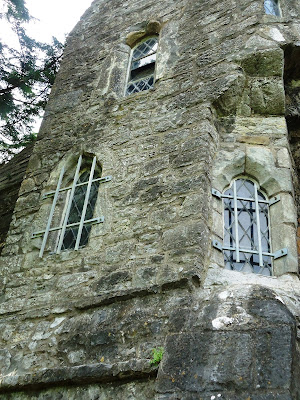 Saint Doulagh’s Church has been described as ‘the jewel in Fingal’s crown’ (Photograph: Patrick Comerford, 2013)

Saint Doulagh’s Church, which is the best-known landmark in the area, is about 1 km north of Balgriffin and three miles from Malahide. It is one of two churches in the United Parishes of Malahide, Portmarnock and Saint Doulagh’s.

Saint Doulagh’s was described on the Dublin and Glendalough diocesan website recently as “the ancient yet vibrant Jewel,” and in the Fingal Independent as “The Jewel in Fingal’s Crown.” 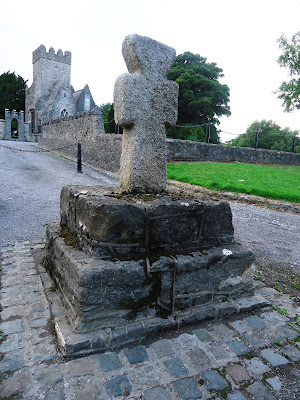 A granite cross stands at the entrance to the site on the west side of the Malahide Road (Photograph: Patrick Comerford, 2013)

This is the oldest stone-roofed church still in use in Ireland. The complex also includes an octagonal baptistery – the only stand-alone baptistery surviving in Ireland –a stone pool-house and a cross of non-local granite that stands at the entrance.

The story of the site 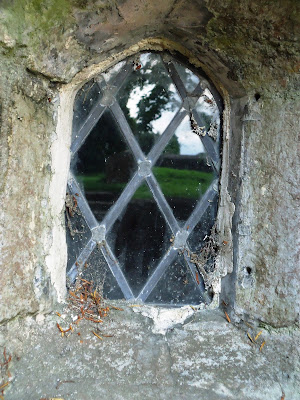 The oldest part of the church dates from the 12th century (Photograph: Patrick Comerford, 2013)

The church is said to stand on a site that was home to a small monastic settlement. According to some local legends, the site dates back to the time of Saint Patrick in the fifth century, and the church was renovated rather than built in the twelfth century. However, the oldest part of the church as it stands today is mediaeval, and dates from the twelfth century.

In 1038, the site was granted to the Prior of the Holy Trinity, or Christ Church Cathedral, Dublin. The priors probably supplied the church with Augustinian friars or canons of the cathedral for the liturgical and pastoral needs of the parish, although we have the names of five pre-Reformation vicars who served the parish in the 15th and 16th centuries.

There was another church or chapel at Balgriffin that was dedicated to the Welsh saint, Saint Samson. That church was built in the 13th century a Welsh settler named Griffin who also built Balgriffin Castle. Later legend developed that the monastery at Saint Doulagh’s was founded Saint Samson while he was visiting nearby Howth.

As rectors, the precentors provided the parish with vicars, and for half a century between 1671 and 1721, three members of the Grattan family succeeded each other as Vicars of Saint Doulagh’s. The statesman and patriot Henry Grattan was a member of this family.

Sometimes the vicars also served the neighbouring parishes of Baldoyle, Donabate, Howth, Malahide and Portrane. Although this arrangement continued until the Disestablishment, Saint Doulagh’s was provided with its own “perpetual curate” or vicar from 1786 on.

The Revd William Studdert Kennedy (1825-1914), who was the “perpetual curate” or vicar of Saint Doulagh’s 1851-1865, was the father of the Revd Geoffrey Anketell Studdert Kennedy (1883-1929), the much-loved World War I chaplain who was known affectionately as “Woodbine Willie.”

In 1900, the parish was united with Malahide and Portmarnock. 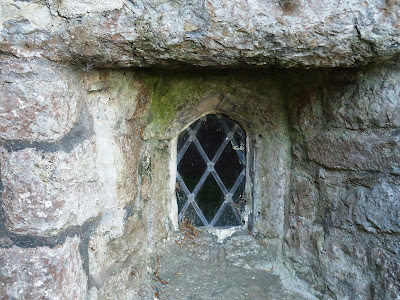 The church is built with solid stone and with walls that are three-feet thick (Photograph: Patrick Comerford, 2013)

The original, main building is built with solid stone and with walls that are three-feet thick, and it has survived well over the centuries.

This building is 48 ft by 18 ft, with a double roof of rough stone set with cement. The space between the inner and outer, wedge-style, roof is usable. Part-way along the roof is a small, battlemented stone tower dating from the 15th century. There is a small door on the south face, with a rough arch, and traces of smoother arches on either side.

Inside is a smaller room, with the reputed tomb of Saint Doulagh, and a larger room, the former main place of worship, with a stairway to the upper floor and tower. Going up the stairway is the Prior’s chamber, then the area where the clergy ate and slept.

In the early 1860s, when the Revd William Studdert Kennedy was “perpetual curate” or Vicar of Saint Doulagh’s, a committee chaired by Lord Talbot de Malahide, who lived in Malahide Castle, raised funds to renovate the church. An addition, designed in the Gothic Revival style by the Belfast architect WH Lynn, was built in 1863-1865 and it appears to blend in seamlessly with the older buildings. It was blessed and consecrated on 25 January 1865 by Archbishop Richard Chenevix Trench (1807-1886), who had become Archbishop of Dublin a year earlier. 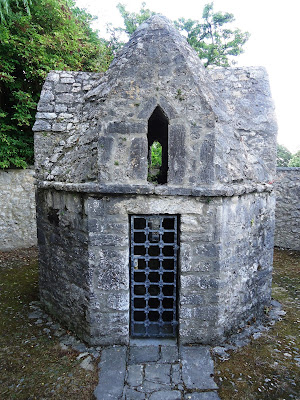 The octagonal baptistery is the only surviving detached baptistery in Ireland (Photograph: Patrick Comerford, 2013)

Aside from the main church building, Saint Doulagh’s features, in a field to the north beyond the church and nearer the road, a low octagonal building, covering a spring. This octagonal baptistery is the only surviving detached baptistery in Ireland. Beside this is an open-air pool with stone seating, and these are all contained within a sunken stone enclosure. 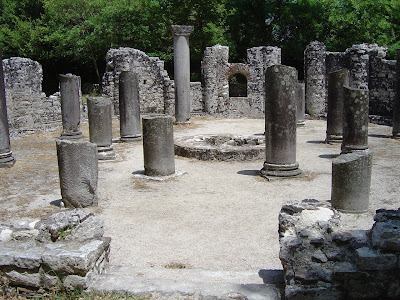 The baptistery in Butrint, Albania, originally had an octagonal plan (Photograph: Patrick Comerford)

The best-known octagonal baptistery in Christian archaeology many be baptistery in front of the west end of the Duomo in Florence. The octagonal plan that became popular for baptisteries in the Middle Ages, including those in Florence, Ravenna, Milan, Parma, Volterra and Pistoia in Italy and Butrint in Albania, served as a visual metaphor for the number eight, which in Christian numerology symbolised a new beginning. As eight follows the “complete” number, seven, so the beginning of the Christian life follows baptism.

In the fourth century, Saint Ambrose wrote of the octagonal baptistery in Milan: “It was fitting that the baptismal hall should stand to the number eight, by which true salvation returned to mankind.”

Those early baptisteries were roofed with domes, symbolising the heavenly realm towards which the Christian progresses after the first step of baptism. The baptismal font was usually octagonal, set beneath a dome or canopy, and encircled by columns and an ambulatory. These features were first used by the Byzantines when they altered Roman buildings to use as baptisteries. 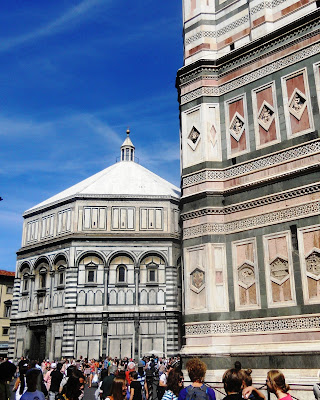 The octagonal baptistery in Florence, built between 1059 and 1128 ... Dante was baptised there (Photograph: Patrick Comerford, 2012)

Baptisteries commonly adjoined the atrium, or forecourt, of the church and were often large and richly decorated, such as those at Florence, Pisa and Parma. After the sixth century, baptisteries were gradually reduced to the status of small chapels inside churches.

The Baptistery in Florence is renowned for its three sets of bronze doors by Andrea Pisano and Lorenzo Ghiberti – Michelangelo named the east pair of doors “the Gates of Paradise,” and was Dante baptised there. 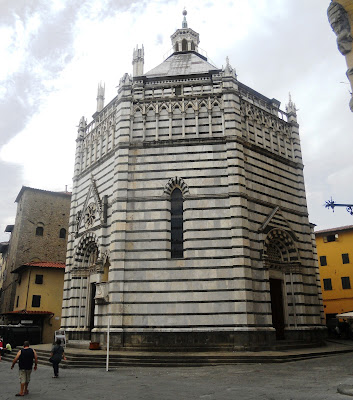 The octagonal baptistery in Piazza del Duomo, opposite the Cathedral of San Zeno in Pistoia in Tuscany, dates from the 14th century. (Photograph: Patrick Comerford, 2012)

So, the octagonal plan of the baptistery at Saint Doulagh’s, although on a much smaller scale, shows an awareness of and an interaction with Christian practice at the time in southern Europe, both in Italy and throughout the Byzantine realm.

The baptistery was repaired in 1609 by Patrick Fagan of the nearby but vanished village of Feltrim. He had the baptistery decorated, or (more likely, following Italian and Byzantine fashion) redecorated with frescoes showing the Descent of the Holy Spirit at Pentecost, the three patrons of Ireland, Saint Patrick, Saint Bridget, Saint Columba or Columcille, and the patron of the site, Saint Duilech or Saint Doulagh, dressed in the robes of a hermit. The shrine was completed with a Latin poem written praising the virtues of both the saint and the holy well.

Sadly, the baptistery was desecrated and the frescoes were destroyed by Sir Richard Bulkeley of Dunlavin, Co Wicklow, and his troops returning from the Battle of the Boyne in 1690. 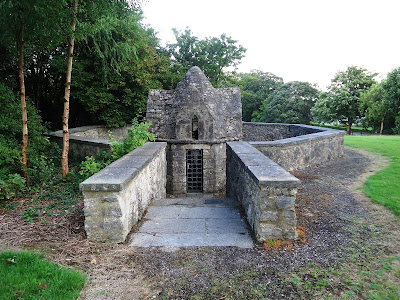 Linked to this enclosure by a water channel is a stone pool-house, with a body of water called Saint Catherine’s Pond. The pool may have been used for adult immersion.

The baptistery complex was restored in 1991 with the help of State funding.

The baptistery complex at Saint Doulagh’s was restored in 1991 (Photograph: Patrick Comerford, 2013) 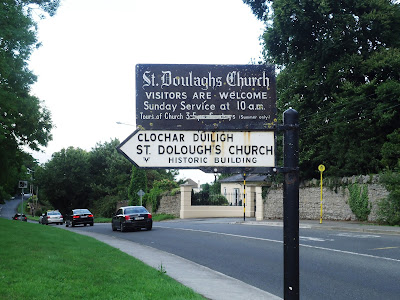 Saint Doulagh’s stands off the road from Balgriffin to Malahide (Photograph: Patrick Comerford, 2013)

We know very little about Saint Doulagh who gave his name to the church, and his story is shrouded in legend and myth. Some say Saint Doulagh was a direct disciple of Saint Patrick, others that he was hermit or anchorite who lived in isolation in the early seventh century in a cell attached to the church, having only minimal contact with the outside world.

Despite the popularity of the myths and legends, we do not know whether Saint Doulagh ever existed. There are contrary accounts the church may have been built by Vikings.

Saint Doulough’s was also the name of a long-lost church in the Wood Quay area of the Viking city in Dublin.

In the 19th century there was some dispute over the existence of Saint Doulagh, with some historians and antiquarians believing he was the same person as the Viking martyr and king, Saint Olave or Olaf of Norway.

Saint Olave or Olaf (995-1030) was King of Norway (1015-1028) and is known as “Norway’s Eternal King” and the patron saint of Norway. Traditionally, he was seen as playing a major role in bringing Christianity to Norway. He was canonised in Trondheim by Bishop Grimkell a year after his death in the Battle of Stiklestad on 29 July 1030, and this was confirmed by Pope Alexander III in 1164.

Many mediaeval churches in England were dedicated to him and known as Saint Olave’s – the earliest reference we have is to Saint Olave’s Church in York in 1055 in the Anglo Saxon Chronicle.

Saint Doulagh’s feast day is 17 November. An annual pattern was held here each year until it was suppressed by the local Roman Catholic clergy in the 19th century. 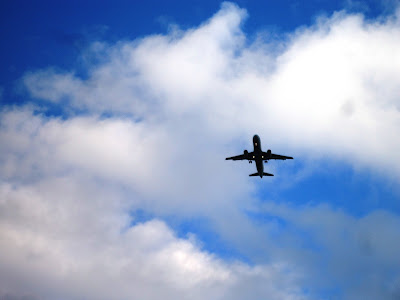